Detroit Lions center Frank Ragnow rattled off a slew of names, thanking those who helped him become the NFL's highest-paid player at the position.

The Pro Bowl center was collected and composed as he shouted out the Ford family, his agents, former Lions coach Matt Patricia and general manager Bob Quinn, college and high school coaches, his fiancé and many more.

When Ragnow mentioned his mother and late father, though, he got choked up. Jon Ragnow died of a heart attack during the 2016 football season. 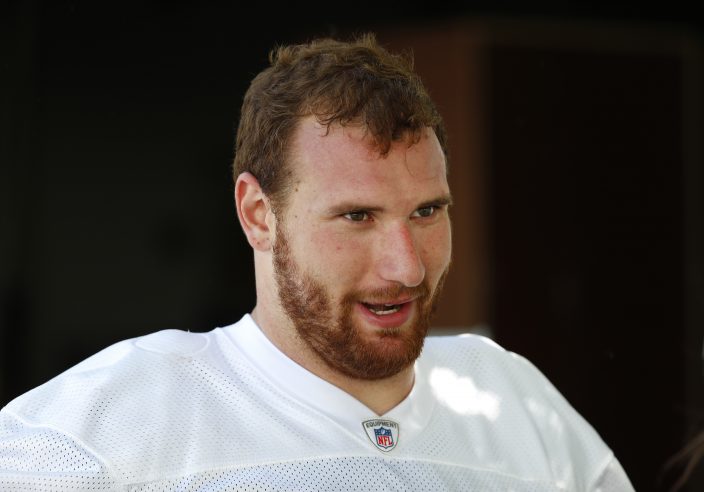 FILE - Detroit Lions offensive lineman Frank Ragnow talks after an NFL football practice in Allen Park, Mich., in this Monday, June 11, 2018, file photo.The Detroit Lions have signed Pro Bowl center Frank Ragnow to a $54 million, four-year extension that keeps him under contract through the 2026 season. The team announced the deal Friday, May 7, 2021, investing in one of the franchise’s building blocks under general manager Brad Holmes and coach Dan Campbell. (AP PhotoPaul Sancya, File)

“I don’t think it’s ever really hit me until right now,” he said Friday on a Zoom call with reporters.

The Lions signed Ragnow to a $54 million, four-year extension that keeps him under contract for a total of $70 million through the 2026 season.

Ragnow will average $13.5 million per season, giving him $1 million more per year than Los Angeles Chargers center Corey Linsley will make with the contract he signed in March.

“When you sign a contract like this, it’s kind of hard to digest that amount of money,” Ragnow said. "It must of just hit me today. Me and my dad and my mom, we’ve kind of planned this. This has always kind of been the goal since Day 1.

“I was at my mom’s house yesterday and we were going through some school projects. One of my school projects in middle or elementary school, I had wrote that my goal was to make it to the NFL and take care of my parents.”

Once again, Ragnow got choked up and had to pause before continuing the virtual news conference.

“My dad is not here, but I’m very excited to take care of my mom because I had an amazing childhood," he said. "I’m just so proud of how I was raised. To be able to give back to my mom — I wish I could give back to my dad and go fishing with him — means the world.”

The Lions are reshaping their roster under new general manager Brad Holmes and coach Dan Campbell and sent a message, investing in one of the franchise's building blocks that anchors the team’s strength on the offensive line.

“Frank is a foundational piece of what we’re building in Detroit and he is everything that we’re looking for in a Lion," Holmes said. "Frank plays the game the right way and he has dedicated himself to improving his craft each season. We are ecstatic to come to this agreement and to have Frank as a leader on our team for years to come.”

The Lions exercised the fifth-year contract option on Ragnow's contract last month and made it clear that working out a long-term deal with him was a priority.

“I definitely wasn’t stressing over it,” he said. “Ever since my dad passed, I’ve kind of taken everything day by day. I knew I was under contract for two more years. I just kind of live in the moment. Now looking forward, it’s awesome.”

Detroit drafted him No. 20 overall out of Arkansas in 2018. Ragnow, who is from Victoria, Minnesota, has started all 45 games he’s appeared in over three seasons.

Ragnow played with a fractured throat in a 31-24 loss to Green Bay last December. He was inactive for the next two games and returned for the final game of the season.

Even though Ragnow will no longer work in relatively anonymity, he is not worried about proving he's worth being the league's highest-paid center.

“There’s a pressure that comes with it, but one thing that has gotten me here is my pride," Ragnow said. "The pride in the name. There’s a lot of outside sources that can put pressure on you, but I don’t think it’s ever going to be more than the pressure I put on myself.