Zach Davies allowed five hits in seven scoreless innings, Rex Brothers got his first save in eight years and the Chicago Cubs held on to beat the Pittsburgh Pirates 3-2 on Friday, extending their winning streak to four.

Joc Pederson had three hits and an RBI for the Cubs, who were coming off a three-game sweep of the World Series champion Los Angeles Dodgers. Javier Báez and David Bote had two hits each. 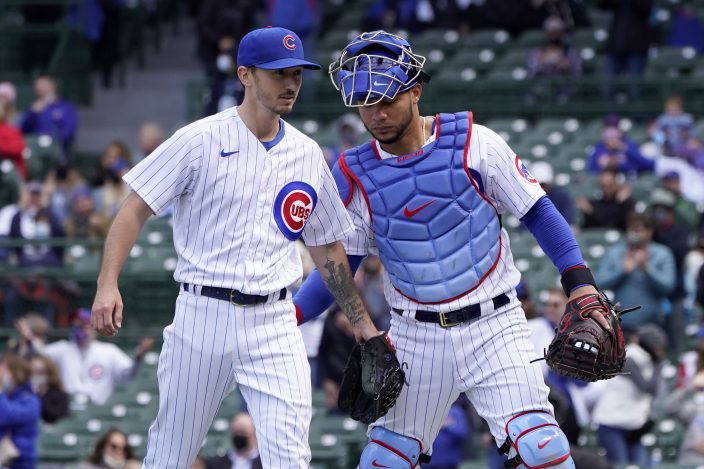 Chicago Cubs catcher Willson Contreras, right, congratulates starting pitcher Zach Davies after Davies got out of a no outs, base-loaded jam during the seventh inning of a baseball game against the Pittsburgh Pirates, Friday, May 7, 2021, in Chicago. (AP PhotoCharles Rex Arbogast)

Pittsburgh has lost seven of eight and is last in the NL Central at 13-18. The Pirates have six runs in their last five games.

Davies (2-2), acquired from San Diego in a seven-player deal in December, had his best outing for the Cubs on a chilly day at Wrigley Field, with the wind blowing in. The slender right-hander limited the Pirates to five singles while walking one and hitting a batter, and he lowered his ERA from 8.22 ERA to 6.30.

Colin Morin and Jacob Stallings had two hits each. Pittsburgh rallied for two runs off relievers Andrew Chafin and Ryan Tepera in the ninth — and loaded the bases with two outs. 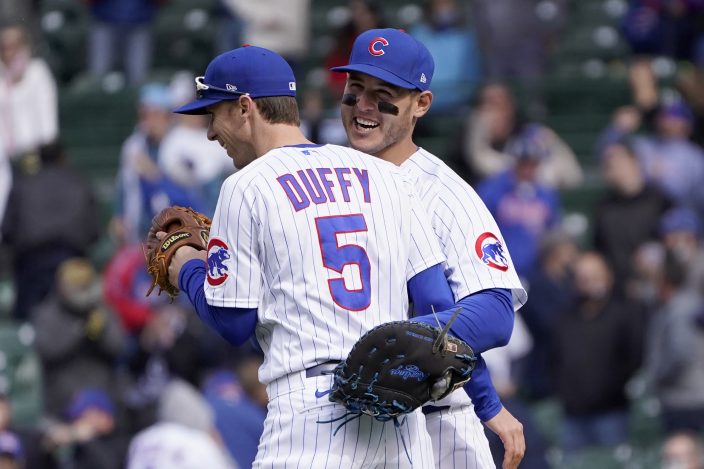 Chicago Cubs' Matt Duffy (5) and Anthony Rizzo celebrate their win over the Pittsburgh Pirates after a baseball game Friday, May 7, 2021, in Chicago. (AP PhotoCharles Rex Arbogast)

Todd Frazier had a run-scoring a groundout, and Ka’ai Tom had an RBI single.

Pinch-hitter Wilmer Difo dumped a bloop single into center off Brothers, who then hit Adam Frazier with a pitch to load the bases. But Brothers got Bryan Reynolds to fly out to end it, and earn his first save since Sept. 29, 2013, when he earned his 19th that season, for Colorado at the Los Angeles Dodgers.

Pittsburgh loaded the bases in the seventh, but Davies fielded Frazier's tapper and got a forceout at the plate. Tom followed with a comebacker, and Davies started an inning-ending double play. 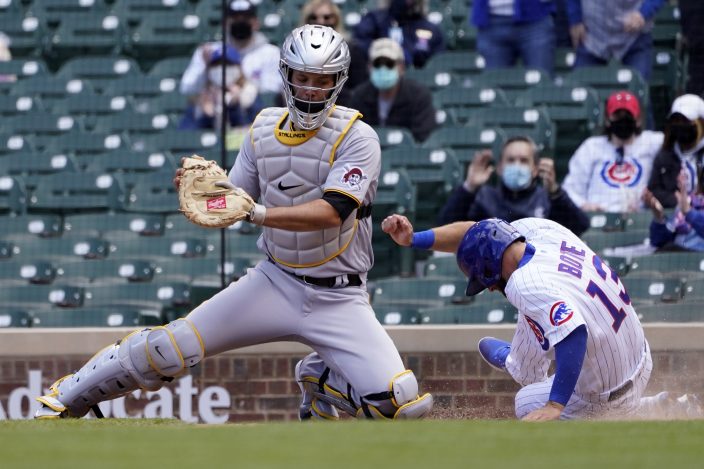 Chicago Cubs' David Bote (13) scores past Pittsburgh Pirates catcher Jacob Stallings, on a single by Joc Pederson, during the second inning of a baseball game Friday, May 7, 2021, in Chicago. (AP PhotoCharles Rex Arbogast)

Trevor Cahill (1-4) allowed three runs — two earned — and eight hits in five innings. The right-hander could only chuckle as he got the Pirates first hit in the third.

With Tom at first, Cahill fouled off two sacrifice bunt attempts behind 0-2 in the coubt. He pushed his third attempt to the right side and past charging Cubs infielders to reach base.

Pederson trotted home with an unearned run in the first when Phillip Evans dropped Anthony Rizzo’s fly near the close-in right-field sidewall. 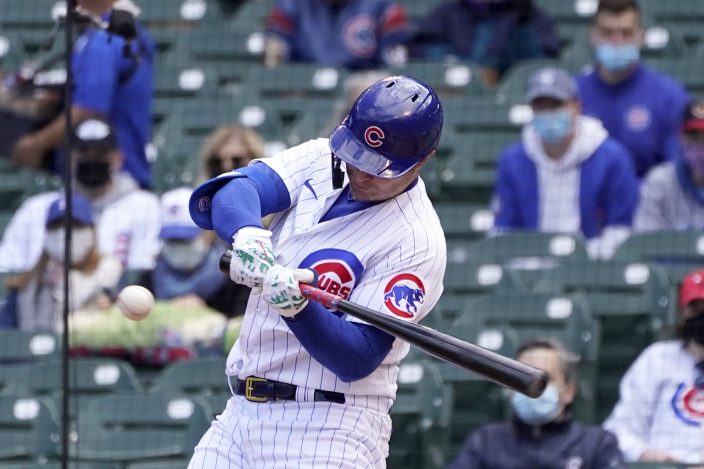 Pederson had an RBI single in the second, and Matt Duffy hit a sacrifice fly to short center against the wind in the third. 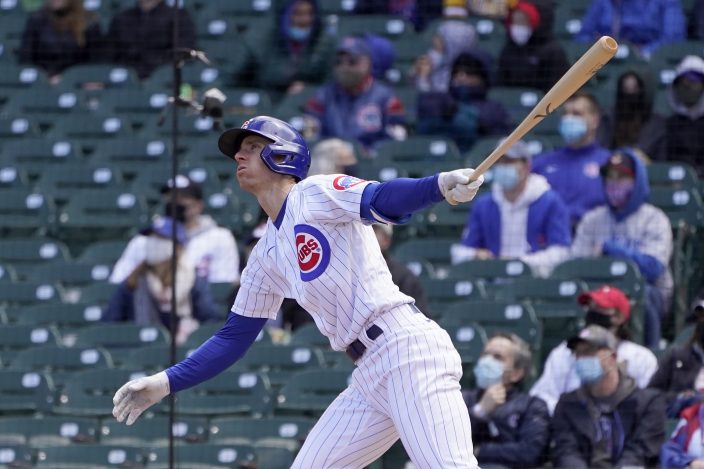 Chicago Cubs' Matt Duffy watches his sacrifice fly off Pittsburgh Pirates starting pitcher Trevor Cahill during the third inning of a baseball game against the Pittsburgh Pirates on Friday, May 7, 2021, in Chicago. Javier Baez scored on the play. (AP PhotoCharles Rex Arbogast)

Pirates: Manager Craig Shelton expects RHP Chad Kuhl (right shoulder discomfort) to throw live batting practice within the next few days. ... 3B Ke’Bryan Hayes (left wrist strain) has resumed swinging a bat, but there’s no timetable for his return. Hayes hit .376 in 24 games as a rookie last year, but has been out since the second game of this season.

Cubs: Placed CF Ian Happ (bruised ribs) on the 10-day injured list retroactive to May 4. Happ was out of the lineup for the fourth consecutive game after being taken from the field in a cart following a collision with 2B Nico Hoerner during Sunday’s loss at Cincinnati. ... The Cubs selected the contract of OF Nick Martini from Iowa. Martini, from suburban Crystal Lake, pinch hit for Davies in the seventh and flied out. 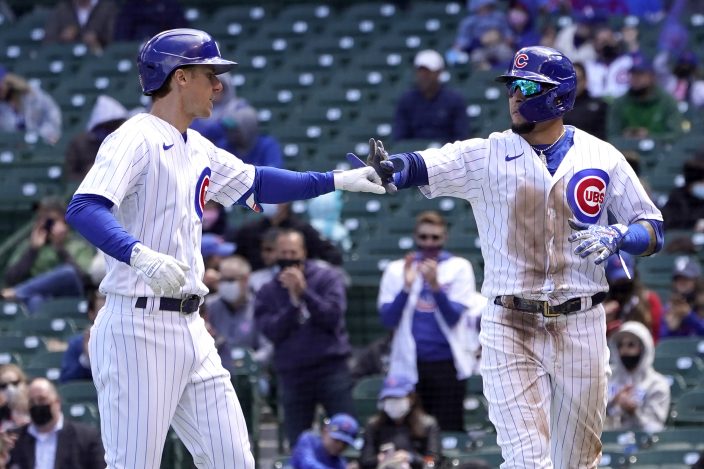 Chicago Cubs' Javier Baez, right, greets Matt Duffy outside the dugout after Baez scored on Duffy's sacrifice fly during the third inning of a baseball game against the Pittsburgh Pirates Fon riday, May 7, 2021, in Chicago. (AP PhotoCharles Rex Arbogast) 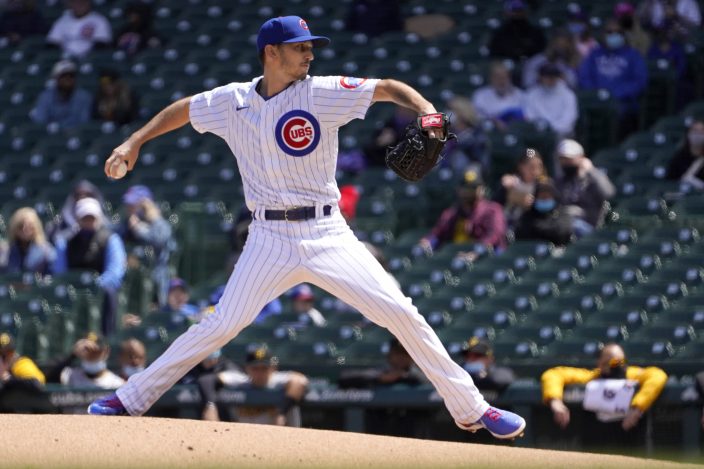 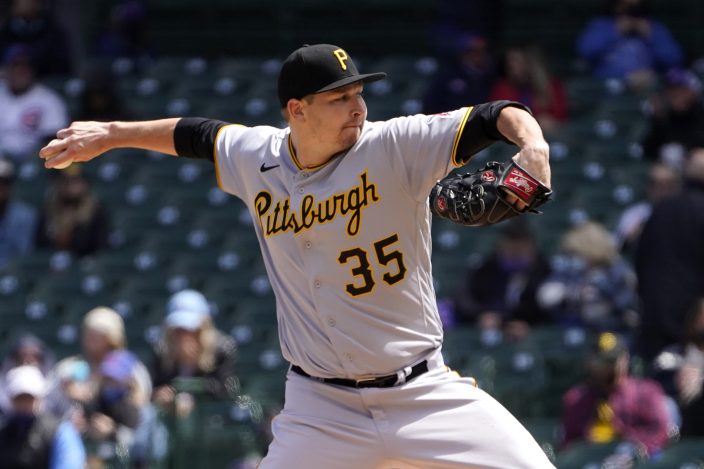 With blood still dripping from his ...