Javier “Chicharito” Hernández will be participating in his first El Tráfico but it remains to be seen whether he will be facing close friend Carlos Vela.

The LA Galaxy and LAFC — whose stadiums are only 12 miles apart — have the first of three regular-season meetings Saturday when the Galaxy host at Dignity Health Sports Park. The possible matchup of Mexican superstars has lifted the four-year-old rivalry to another level.

Hernández and Vela grew up in Guadalajara, Mexico, and came up together through Chivas' system and have played for Mexico's national team in two World Cups. Both were plagued by injuries last season and didn't face each other. 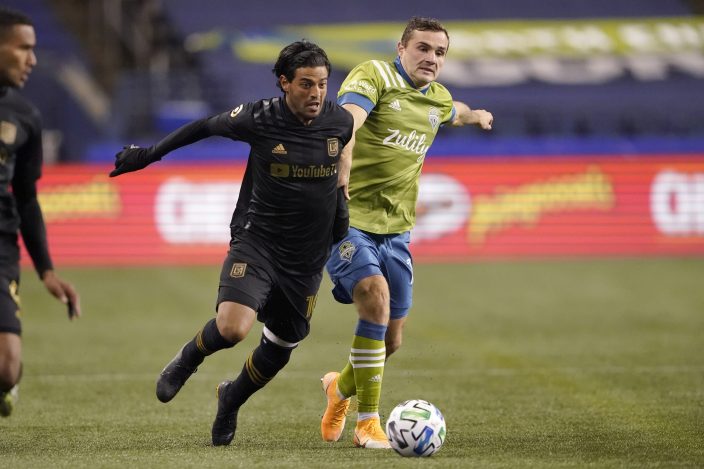 FILE - Los Angeles FC forward Carlos Vela and Seattle Sounders forward Jordan Morris, right, vie for the ball during the second half of an MLS playoff soccer match in Seattle, in this Tuesday, Nov. 24, 2020, file photo. Vela, who had an MLS record 34 goals in 2019, missed the MLS is Back tournament because of his wife's pregnancy and the birth of their child. Then he was hampered by injuries, appearing in only eight games. (AP PhotoTed S. Warren, File)

“This one has more special meaning in a way. It is a little bit different,” Hernández said. “I would love to play against him because of the relationship I have with him.”

Vela, the 2019 MLS MVP and top goal scorer, suffered a quadriceps strain 22 minutes into the April 17 opener against Austin FC and hasn't played the past two games. Last season, he suffered a knee injury in August that kept him out for three months.

LAFC coach Bob Bradley said Vela has resumed training and his participation Saturday will be a gametime decision. Bradley's squad has played to draws against Seattle and Houston after winning its opener.

Hernández has bounced back after being limited last season. He scored five goals in the Galaxy's first two games this season, becoming the first MLS player in 15 years to do that. LA is 2-1 after a 3-0 loss at Seattle.

Vela and Hernández have not been on opposing sides since 2013, when Vela's Real Sociedad faced Hernández and Manchester United in a pair of Champions League group stage matches.

“I always want to face the best teams and players because it's always great when we can elevate in the league and the competition as well. So of course it would be amazing,” Hernández said.

Bradley said he has noticed a fresher Chicharito and that new coach Greg Vanney's style has also benefited his playing style.

Despite its short history, El Tráfico has produced many memorable moments. Zlatan Ibrahimovic came on as a substitute in his Galaxy debut and had a pair of second-half goals in the first meeting in 2018. LAFC beat its rival for the first time in a 2019 Western Conference semifinal.

The teams split the four games last season. Overall, the Galaxy have won four of the nine regular-season meetings, with LAFC taking two. The teams have played to a draw three times. Vela has eight goals against the Galaxy.

The game, which will be televised on Fox, should help Major League Soccer establish more of a footprint in Mexico. The league was supposed to play its All-Star Game last year against the top players from Mexico's Liga MX, but it was canceled due to the coronavirus pandemic. Commissioner Don Garber said the league plans to have an All-Star Game this season but the format remains to be determined.