Francisco Lindor hit a tying, two-run homer in the seventh inning after an apparently heated exchange with teammate Jeff McNeil in the dugout tunnel, and the New York Mets rallied to beat the Arizona Diamondbacks 5-4 Friday night.

A day after snapping an 0-for-26 slide with a ninth-inning single in St. Louis, Lindor produced his biggest moment since signing a $341 million, 10-year deal with the Mets. He tied the game by hitting a 2-2 changeup from left-hander Caleb Smith. 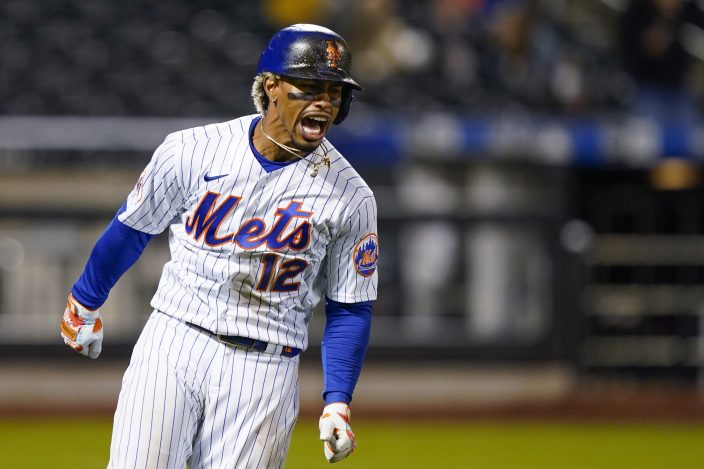 The blast came a half-inning after shortstop Lindor and second baseman McNeil combined to misplay a popup. After the top of the seventh, Mets players rushed into the tunnel adjacent to their dugout to address some sort of commotion.

Lindor acknowledged after the game that he and McNeil were having a disagreement — he claimed the pair saw a rat in the tunnel, and he was objecting to McNeil's suggestion that it was a raccoon.

After rounding the bases on his homer, Lindor exchanged fist bumps with Tomas Nido, who drew a walk to start the inning, and Michael Conforto, who was waiting in the on-deck circle. Conforto was among the first who flew toward the tunnel during the exchange. 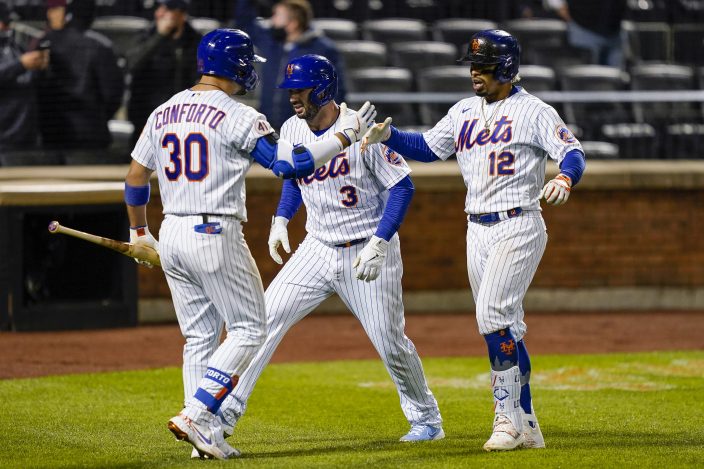 Shortly after Lindor’s second homer as a Met, billionaire owner Steve Cohen tweeted: “That was BIG”.

Mazeika softly hit a 2-2 pitch from Stefan Crichton (0-1) to the first base-side of the mound to score Alonso, who dived head-first across the plate.

Before his homer, Lindor heard boos when he flied out in the fifth with a runner on first. Lindor went 2 for 5 and produced his second multi-hit game as a Met. His other was April 14 against Philadelphia. 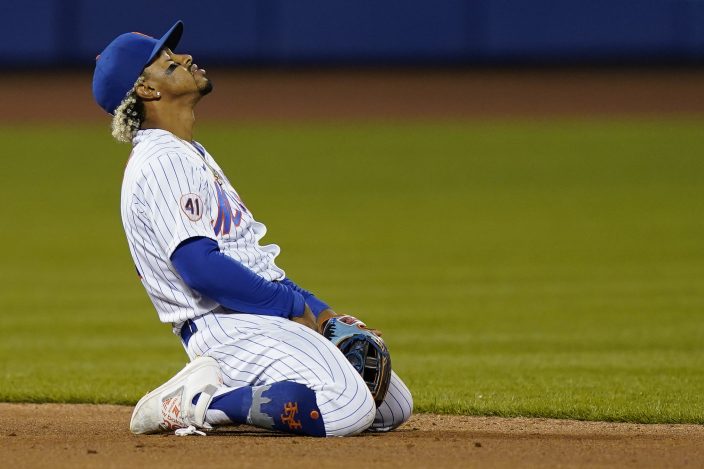 New York Mets shortstop Francisco Lindor reacts after a failed double-play attempt on a ball hit by Arizona Diamondbacks' Zac Gallen during the third inning of a baseball game, Friday, May 7, 2021, in New York. A runner was forced at second, and a run scored. (AP PhotoJohn Minchillo)

Conforto and Jonathan Villar hit RBI singles off Arizona starter Zac Gallen as the Mets moved over the .500 mark at 14-13 for the first time since April 25 in their first home game since hitting coach Chili Davis and assistant hitting coach Tom Slater were fired Monday.

The Diamondbacks lost their fourth straight after taking a 4-0 lead by scoring all their runs without a hit. Arizona hit 10 singles but went 1 for 16 with runners in scoring position and stranded 13. 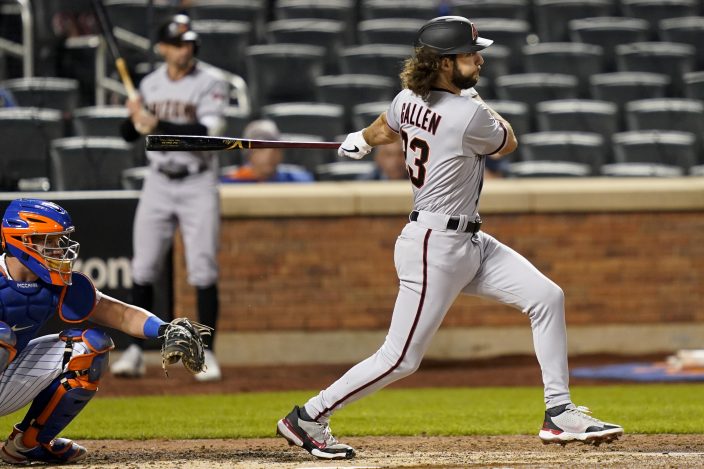 Arizona Diamondbacks' Zac Gallen follows through on a ground ball off New York Mets relief pitcher Robert Gsellman, driving in a run during the third inning of a baseball game, Friday, May 7, 2021, in New York. A runner was forced at second on the play. (AP PhotoJohn Minchillo)

Tim Locastro drove in a run by getting hit on the foot to start a three-run second inning off David Peterson. Carson Kelly and Christian Walker drew bases-loaded walks to make it 3-0 and chase Peterson.

Gallen reached twice by drawing Arizona’s first walk of its two-out rally and then beat out a double play grounder in the third that scored former Mets player Asdrubal Cabrera.

Gallen allowed a run on three hits in six innings. He struck out five, walked four and dodged significant trouble each inning on a 56-degree night in a game where he made 15 pickoff throws to first base. 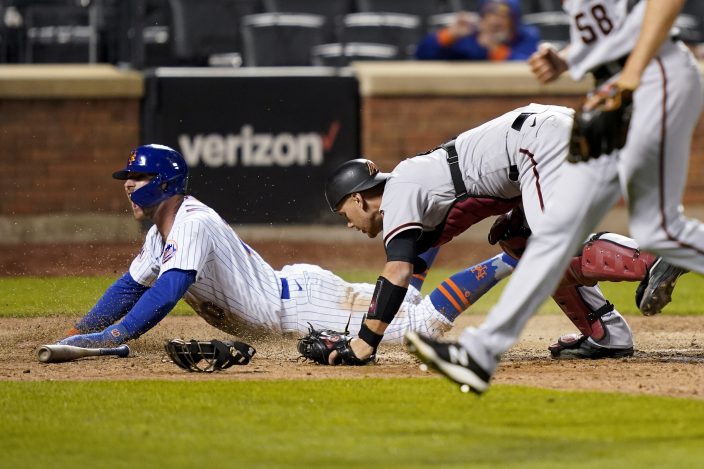 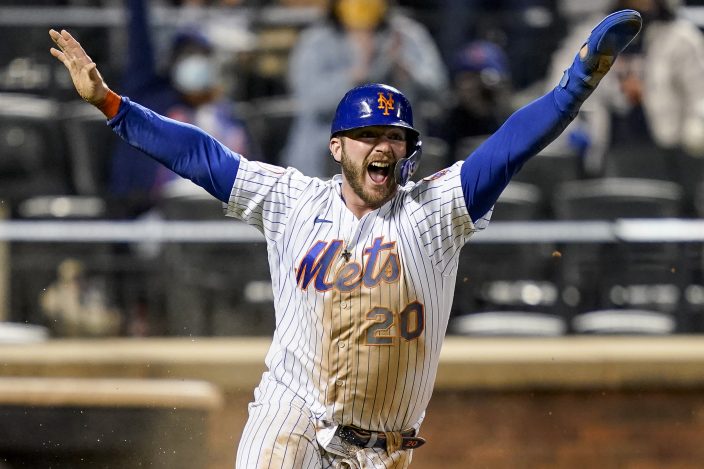 New York Mets' Pete Alonso celebrates after scoring the game-winning run against the Arizona Diamondbacks in the 10th inning of a baseball game Friday, May 7, 2021, in New York. (AP PhotoJohn Minchillo)

Mets: RHP Jacob deGrom (right lat inflammation) played catch and threw a side session that manager Luis Rojas said went well. The Mets will assess how deGrom feels Saturday before deciding if he will start Sunday. ... IF Luis Guillorme (strained right oblique) felt pain while swinging and will not be activated Sunday when he is eligible. ... RHP Matt Allan, New York’s top pitching prospect, will undergo Tommy John surgery to repair a partial tear of the ulnar collateral ligament in the next few weeks. A third-round pick in 2019, Allan threw 10 1/3 innings in six appearances two years ago while splitting time in the Gulf Coast League and defunct New York-Penn League.

RHP Merrill Kelly (2-2, 5.79) starts for Arizona after being activated off the injured list Friday. The Mets did not announce a starter for Saturday.