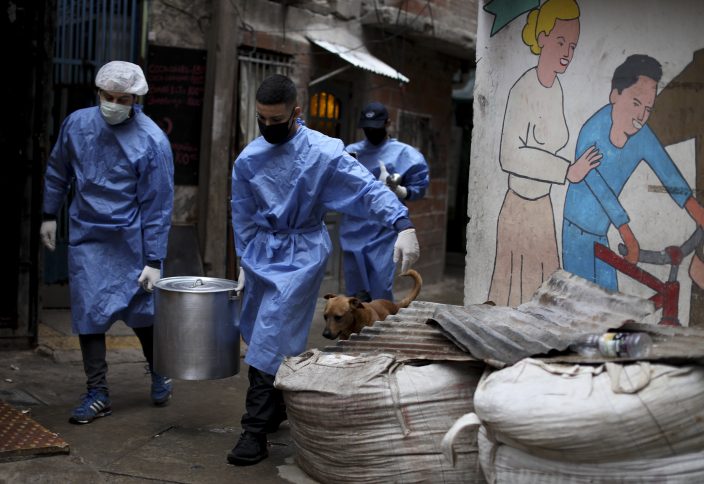 FILE - In this June 6, 2020 file photo, volunteers carry a pot of food for residents, inside the Fraga slum during a government-ordered lockdown to curb the spread of the new coronavirus, in Buenos Aires, Argentina. The government announced a new social aid package on Friday, May 7, 2021, for the most vulnerable sectors of the population which have been affected by the pandemic and inflation. (AP PhotoNatacha Pisarenko, File)

ECONOMY-JOBS-REPORT — America’s employers added just 266,000 jobs last month, sharply lower than in March and a sign that some businesses are struggling to find enough workers as the economic recovery strengthens. With viral cases declining and states and localities easing restrictions, businesses have added jobs for four straight months, the Labor Department said Friday. Still, the unemployment rate ticked up to 6.1% from 6% in March. By Economics Writer Christopher Rugaber. SENT: 735 words, photo.

CONGRESS-EQUALITY ACT — Legislation that would create new protections for LGBTQ Americans is stalling out in the U.S. Senate. Democrats were hopeful they could pass the Equality Act this year, but Republicans are staunchly opposed, warning the bill would open the floodgates for transgender girls and women to play on female sports teams. By Mary Clare Jalonick and David Crary. SENT: 1,090 words, photo.

FACEBOOK-TRUMP-SOCIAL MEDIA — Lurking beneath Facebook’s decision on whether to continue Donald Trump’s suspension from its platform is a far more complex and consequential question: Do the protections carved out for companies when the internet was in its infancy 25 years ago make sense when some of them have become global powerhouses with almost unlimited reach? By Marcy Gordon. SENT: 820 words, photo.

GEORGE FLOYD-OFFICERS-CIVIL RIGHTS — A federal grand jury indicts the four former Minneapolis police officers involved in George Floyd’s arrest and death, accusing them of willfully violating Floyd’s constitutional rights as he was restrained face-down on the pavement and gasping for air. By Amy Forliti and Michael Balsamo. SENT: 1,120 words, photos.

SCI-CICADA-EXPLAINER — Trillions of red-eyed cicadas are about to emerge from underground and sing loud songs. Insect experts explain their weird lives, why they come out in such massive numbers, why they sing so loudly and why they bug us. They’re not locusts, they’re not monsters and they’re not dangerous. But they do bring up a lot of questions. By Seth Borenstein. SENT: 1,095 words, photos.

BRAZIL-RIO-MACAW-LOVE — A blue-and-yellow macaw that zookeepers named Juliet is believed to be the only wild bird of its kind left in the Brazilian city where the birds once flew far and wide. SENT: 760 words, photos.

BREEZE-AIRWAYS-LABOR — Breeze Airways, a start-up carrier that hopes to begin flying this spring, is giving up on a plan to hire only college students as flight attendants after the strategy failed to draw enough applicants. SENT: 230 words, photos.

CALIFORNIA-POPULATION LOSS — California’s population has declined for the first time in its history. SENT: 180 words.

NEPAL-EVEREST-GUIDE — A Sherpa guide scaled Mount Everest for the 25th time, breaking his own record for the most ascents of the world’s highest peak. SENT: 290 words, photo.

VIRUS OUTBREAK-BRITAIN — The British government on Friday announced a “first tentative step” toward resuming international travel, saying U.K. citizens will be able to travel to countries including Portugal, Iceland and Israel later this month without having to quarantine on their return. SENT: 825 words, photos.

VIRUS OUTBREAK-WHO-VACCINE — The World Health Organization gave its authorization for emergency use of a COVID-19 vaccine manufactured by China’s Sinopharm, potentially paving the way for millions of the doses to reach needy countries through a U.N.-backed program. SENT: 395 words.

VIRUS OUTBREAK-WTO-VACCINES — European leaders are voicing increasing skepticism that a U.S. proposal to lift patent protections on COVID-19 vaccines would solve the problem of getting shots into the arms of people in poorer countries, with some instead calling for more exports of the doses already being produced. SENT: 760 words, photos.

VIRUS-OUTBREAK-JAPAN —Trains packed with commuters returning to work after a weeklong national holiday. Frustrated young people drinking in the streets because bars are closed. Protests planned over a possible visit by the Olympics chief. As the coronavirus spreads in Japan ahead of the Tokyo Olympics starting in 11 weeks, one of the world’s least vaccinated nations is showing signs of strain, both societal and political. SENT: 750 words, photo.

VIRUS OUTBREAK-ARGENTINA-CLOSED CLINICS — COVID-19 deaths have hit new peaks in Argentina, but the intensive care unit at the San Andres clinic in the capital is oddly silent. The beds are empty. The monitors for the respirators are still in their factory wrappings. Cabinets stand full of unused medicines. It’s been that way for weeks now. While the pandemic has swelled the need for hospital beds, many private clinics say they’re struggling to survive. SENT: 510 words, photos.

CAPITOL-BREACH-HEARING — Former acting Defense Secretary Christopher Miller is scheduled to testify next week about the Pentagon’s role in responding to the deadly Jan. 6 riot at the Capitol, the latest in a series of high-profile congressional hearings centered on the insurrection. SENT: 340 words, photo.

VIRGINIA GOVERNOR-GOP CONVENTION — Tens of thousands of Virginians are casting ballots to choose GOP nominees for governor and other statewide offices this weekend. The Republican Party is holding what it’s calling an “unassembled convention” Saturday to select nominees in this year’s race for governor, lieutenant governor and attorney general. SENT: 200 words, photos.

GHOST GUNS — The Justice Department releases a proposed rule that would broaden the definition of a firearm, requiring some gun-making kits to include a serial number. The notice comes several weeks after President Biden promised a crackdown on “ghost guns.” By Michael Balsamo. SENT: 540 words, photos.

CONGRESS-DIVIDED REPUBLICANS — Conservatives in and out of Congress are expressing opposition to Rep. Elise Stefanik’s rise toward House Republicans’ No. 3 leadership job, but their grumbling is unlikely to derail the four-term New Yorker. By Alan Fram. SENT: 900 words, photos.

RENTAL ASSISTANCE — The Biden administration on Friday announced the allocation of $21.6 billion to provide emergency rental assistance to help prevent evictions of people who lost jobs during the pandemic. SENT: 320 words, photos.

GAETZ-GREENE-RALLY — U.S. Reps. Matt Gaetz and Marjorie Taylor Greene, two of the Republican Party’s most controversial figures, kicked off their “America First Rally” roadshow with a Trump-centric revival of sorts for the MAGA faithful at a Florida retirement community. SENT: 710 words, photos.

ASIAN AMERICANS-HEALTH CARE AND HATE — Asian Americans and Pacific Islanders have faced harassment and attacks in many settings during the pandemic. But those in health care are feeling the jarring anguish of being racially targeted because of the virus while toiling to keep people from dying of it. SENT: 1,090 words, photos, video.

NORTH-CAROLINA-DEPUTY-SHOOTING — The family of a Black man who was fatally shot in his car by sheriff’s deputies in North Carolina will only be shown a fraction of body camera footage that was taken. The family could also wait days longer to view it. That’s according to a judge’s ruling. SENT: 585 words, photo.

STANDOFF-DEPUTIES-SHOT — Sgt. Chris Ward and K-9 Deputy Logan Fox were killed during a routine welfare check last week. Family members and those who worked with them remembered them as heroes who dedicated their lives to serving North Carolina’s Watauga County community. SENT: 760 words, photos.

OBIT-RACHEL ZOLL — Rachel Zoll, who for 17 years as religion writer for The Associated Press endeared herself to colleagues, competitors and sources with her warm heart and world-class reporting skills, has died in Amherst, Massachusetts, after a three-year bout with brain cancer. She was 55. SENT: 1,000 words, photo.

NOT REAL NEWS — A variety of false claims gained attention online this week, including that Pfizer admitted in a clinical study that the COVID-19 vaccine could be passed from person to person. SENT: 1,400 words, photos.

ISRAEL-PALESTINIANS — Palestinian worshippers clash with Israeli police at the famed Al-Aqsa Mosque in Jerusalem’s Old City as weeks-long tensions between Israel and the Palestinians soar again, with as many as 53 people injured in the violence. By Joseph Krauss. SENT: 920 words, photos.

FRANCE-LANGUAGE OF INCLUSION — The fight to make the French language kinder to women took steps forward, and back, this week. SENT: 820 words, photo.

IRAN-NUCLEAR — World powers began a fourth round of high-level talks in Austria aimed at bringing the United States back into the nuclear deal with Iran, with major stumbling blocks remaining Friday but both sides suggesting a resolution was possible. SENT: 630 words, photos.

EUROPE-SUMMIT — On the list of things not to do during a pandemic, holding big international gatherings is close to the top. But European Union leaders and their large following of diplomats and advisers are meeting in Portugal for two days of talks, sending a signal that they see the threat from COVID-19 on their continent as waning, amid a quickening vaccine rollout. SENT: 760 words, photos. WITH: EUROPE-SUMMIT-SOCIAL-RIGHTS — Hardship felt during the COVID-19 pandemic has spurred European Union leaders to add muscle to the bloc’s safeguards for its 450 million citizens in welfare, jobs and gender equality. SENT: 300 words, photos: EUROPE-SUMMIT-VACCINES — The European Union has called on the United States to start boosting its vaccine exports to contain the global COVID-19 crisis, and said that the U.S. backing of patent waivers would provide only a long-term solution at best. SENT: 520 words, photos.

COLOMBIA-PROTESTS — Deep social discontent that has festered throughout the coronavirus pandemic is driving thousands of Colombians into the streets to protest, and some of the demonstrations have turned deadly. SENT: 1,050 words, photos.

NASA-CHIEF — New NASA Administrator Bill Nelson is big on tackling climate and diversifying the agency’s workforce. But he hedged during an interview Friday about whether the U.S. can put astronauts on the moon by 2024. SENT: 430 words, photos.

BURKINA FASO-MILITARY CHAPLAINS — Salomon Tibiri, a pastor and military chaplain in Burkina Faso, has been offering soldiers spiritual succor for more than 15 years. But he’s never fielded as many calls from anxious soldiers as in recent years, when the army found itself under attack by Islamic extremist fighters. SENT: 980 words, photos.

BKN--WESTBROOK-TRIPLE-DOUBLE RECORD — Russell Westbrook’s stat lines of late have been looking like typos. The Washington Wizards point guard’s next triple-double -- which could come as soon as Saturday -- will be the 181st of his career, tying Oscar Robertson’s NBA record. SENT: 800 words, photos.