The Justice Department is sending a strong message about its priorities these days.

In just over the past two weeks, it has opened investigations of police in Louisville, Kentucky, and Minneapolis. Federal prosecutors have charged four former Minneapolis police officers with civil rights violations in George Floyd's death, and accused three men of hate crimes in the death of Ahmaud Arbery in Georgia. In both criminal cases, authorities moved forward with federal charges before most of the defendants have gone to state trial.

Attorney General Merrick Garland is making good on his confirmation promise to refocus the department around civil rights after four years of tumult during the Trump administration, when such investigations waned and the focus was on curbing immigration and the Russia probe. 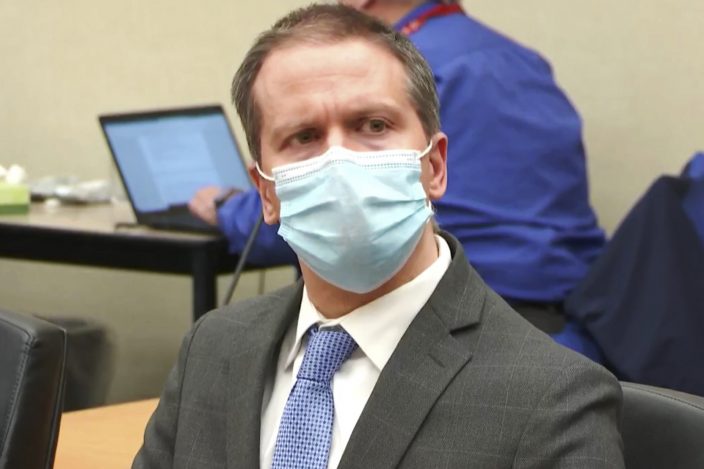 FILE - This April 20, 2021, file image from video, defendant, former Minneapolis police Officer Derek Chauvin, listens to verdicts at his trial for the 2020 death of George Floyd at the Hennepin County Courthouse in Minneapolis. Chauvin was convicted of murder and manslaughter charges in state court and is scheduled to be sentenced June 25. Chauvin's lawyer, Eric Nelson, has filed a request for a new trial in Floyd's death, citing a host of reasons, including publicity that was “so pervasive and so prejudicial ... that it amounted to a structural defect in the proceedings.” (Court TV via AP, Pool)

“What we couldn’t get them to do in the case of Eric Garner, Michael Brown in Ferguson, and countless others, we are finally seeing them do,” the Rev. Al Sharpton said Friday after the charges were announced in Floyd's death.

Former Minneapolis officer Derek Chauvin has already been convicted of murder and manslaughter charges in state court and is scheduled to be sentenced June 25. The federal case could be insurance against a successful state appeal or a lenient sentence.

Separately, federal officials accused Chauvin in a 2017 case involving Chauvin's arrest of a 14-year-old boy. Chauvin hit the boy, who is Black, with a flashlight and pinned him to the ground, putting his knee on the boy's neck and back. 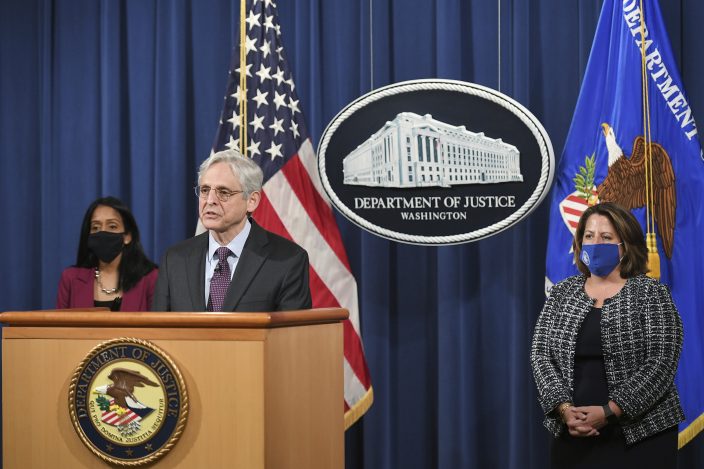 Attorney General Merrick Garland speaks at the Department of Justice in Washington, Monday, April 26, 2021, as associate Attorney General Vanita Gupta and Deputy Attorney General Lisa Monaco. listen. The Justice Department is opening a sweeping probe into policing in Louisville after the March 2020 death of Breonna Taylor, who was shot to death by police during a raid at her home. (Mandel NganPool via AP)

Chauvin's lawyer, Eric Nelson, has filed a request for a new trial in Floyd's death, citing a host of reasons, including publicity that was “so pervasive and so prejudicial ... that it amounted to a structural defect in the proceedings.”

He also argued that the trial judge, Peter Cahill, abused his discretion when he denied earlier requests to move the trial. Cahill has not said when he would rule on Nelson’s request for a new trial. 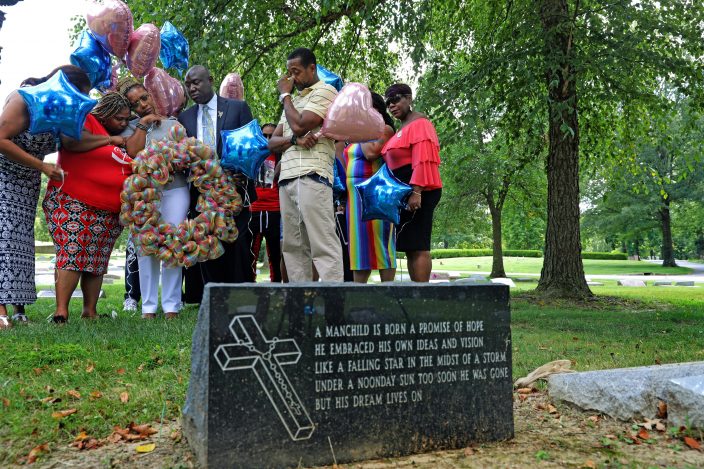 FILE - In this Friday, Aug. 9, 2019 file photo, Lesley McSpadden, the mother of Michael Brown, prays with a group from Rainbow of Mothers, before placing a large wreath at her son's grave on the fifth anniversary of this death, at St. Peter's Cemetery in St. Louis. At left is Samaria Rice, the mother of Tamir Rice, who was killed by police in 2014 in Ohio. At center is Ben Crump, her attorney, and at right, her husband, Louis Head. (Laurie SkrivanSt. Louis Post-Dispatch via AP)

The three other officers brought up on civil rights charges, Thomas Lane, J. Kueng and Tou Thao, haven't been tried yet in state court on charges of aiding and abetting both second-degree murder and manslaughter in the Floyd case.

Usually, federal prosecutors hold off on any charges until local investigations are completed. But when they do, it's often seen a safety net against the difficulty of prosecuting law enforcement locally.

According to a person familiar with the investigation, that happened during the case against former officer Michael Slager in South Carolina. In 2015, Slager shot to death Walter Scott, an unarmed Black man who ran from a traffic stop.

Local prosecutors worried they could not win a conviction, this person said, so federal prosecutors stepped in and brought charges, working out a plea deal to resolve both the federal and state cases. Slager was sentenced to 20 years in federal prison.

The person was not authorized to publicly discuss those internal deliberations and spoke on condition of anonymity.

The federal charge is limited in its scope and has been rarely used. According to Syracuse University’s Transactional Records Access Clearinghouse, or TRAC, federal prosecutors have used it an average of 41 times a year between 1990 and 2019.

In the 1960s, federal authorities successfully prosecuted eight men involved in the 1964 disappearances and murders of civil rights workers Andrew Goodman, James Chaney and Michael Schwerner in Neshoba County, Mississippi, after local authorities said they did not have enough evidence to prosecute anyone.

One of the most high profile uses of the federal statutes came in the 1992 Rodney King case in Los Angeles. Federal authorities charged four law enforcement officers with violating King’s constitutional rights in his videotaped beating. That decision came after a jury in Simi Valley acquitted the officers in the state case, prompting several days of riots in Los Angeles.

It's not clear whether Garland was stepping in to aid local prosecutors in Minneapolis with the three officers, but it's likely they are communicating about the cases. And the same in Georgia, where federal hate crime charges were announced against Travis McMichael and his father, Gregory, and a third man, William “Roddie” Bryan, in the death of 25-year-old Ahmaud Arbery. The three are jailed on state murder charges and are due in court next week. No trial date has been set.

Arbery was killed on Feb. 23, 2020 by three close-range shotgun blasts after the McMichaels pursued him in a pickup truck. Arbery was dead more than two months when a cellphone video of the shooting was leaked online, leading to a national outcry. The Georgia Bureau of Investigation took over the case and arrested the men.

Federal officials have also revived pattern or practice investigations, which were rarely used under the Trump administration. They weren't banned under President Donald Trump, but his attorney general, William Barr, suggested they may have been previously overused.

Jeff Sessions was Trump's first attorney general, and when he resigned in November 2018, he signed a memo that sharply curtailed the use of consent decrees, which are often used during major policing changes in a city. The policy made their use more difficult to enact and required top Justice Department officials to approve the deals. It was quickly rescinded under Garland.

Federal officials have initiated broad reviews that will investigate Louisville police tactics following the death of Breonna Taylor in Louisville last year. A similar investigation into Minneapolis policing was announced the day after Chauvin was found guilty.

Those public announcements have leading to hope that the Garland Justice Department will take a fresh look at some closed investigations. The family of 12-year-old Tamir Rice, who was shot to death by a Cleveland police officer in 2014 while the boy was playing with a toy gun, wrote a letter to Garland asking the investigation be reopened into the officer.

"The election of President Biden, your appointment, and your commitment to the rule of law, racial justice, and police reform give Tamir’s family hope that the chance for accountability is not lost forever,” the family said in the letter.