There was a time, not long ago, when Elise Stefanik would not say Donald Trump's name.

He was simply “my party's presidential nominee,” she would say. The pragmatic New York congresswoman was far more focused on welcoming a new generation of voters to what she hoped would be a more inclusive Republican Party.

Today, Stefanik is one of Trump's fiercest defenders in the House of Representatives, where her loyalty to the former president — and the support he returned — has carried the 36-year-old to the brink of becoming one of the most powerful women in Congress. She is widely expected to become the third-ranking House Republican in the coming days once Rep. Liz Cheney, R-Wyo., is stripped of her leadership post because of her vocal criticism of Trump. 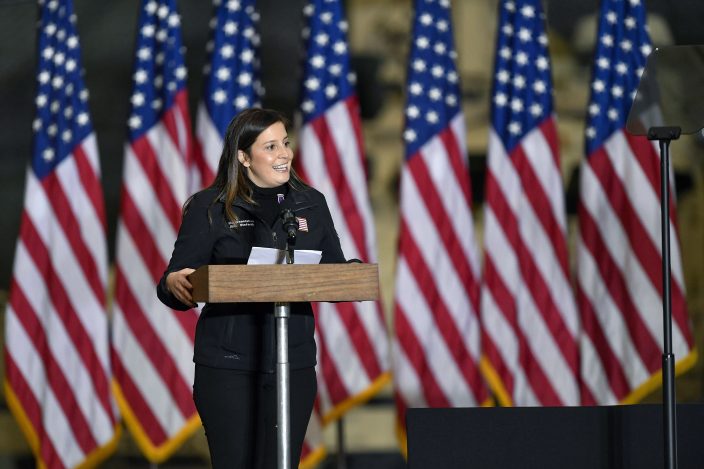 FILE - In this Jan. 17, 2021, file photo Rep. Elise Stefanik, R-N.Y., introduces Vice President Mike Pence and second lady Karen Pence to speak to Army 10th Mountain Division soldiers in Fort Drum, N.Y. Conservatives in and out of Congress are expressing opposition to Stefanik’s rise toward House Republicans' No. 3 leadership job. Stefanik has embraced many of former President Donald Trump's evidence-free claims about 2020 election fraud. She declared this week that states unconstitutionally changed their election laws and said she supports an audit of Arizona votes that conservatives are using to bolster suspicions about the results. (AP PhotoAdrian Kraus, File)

Stefanik's rise is linked to her commitment to bringing more Republican women to Congress, an effort that helped make the House GOP's 2021 first-term class one of the most diverse in history. But those close to Stefanik suggest there is one moment above all that solidified her political transformation and rise in Republican politics — and that moment had little to do with diversity.

It was a Thursday night in November 2019, and Trump's first impeachment inquiry was raging on Capitol Hill. Stefanik had emerged as a leading Trump defender in committee hearings, but on that night, she brought her message to Fox News' Sean Hannity for the first time.

After attacking the Democrats' case for impeachment, she asked Fox viewers to send money to a website designed to protect her from a growing wave of political attacks. FILE - In this May 8, 2020, file photo President Donald Trump, center, speaks during a meeting with Republican lawmakers, in the State Dining Room of the White House, from left, White House chief economic adviser Larry Kudlow, Treasury Secretary Steven Mnuchin, Trump, House Minority Leader Kevin McCarthy of Calif., and Rep. Elise Stefanik, R-N.Y. Stefanik has embraced many of former President Donald Trump's evidence-free claims about 2020 election fraud. She declared this week that states unconstitutionally changed their election laws and said she supports an audit of Arizona votes that conservatives are using to bolster suspicions about the results. (AP PhotoEvan Vucci, File)

Within 15 minutes, she had raised $250,000, aides later tweeted. Several hundred thousand more flowed into her campaign by the next morning. Her team had never seen anything like it, according to people with direct knowledge of her operation who spoke on condition of anonymity to disclose private discussions.

The snowball grew the next day when Trump went on “Fox and Friends” and praised Stefanik. It grew still more weeks later when Trump singled her out during a White House event as he crowed about beating impeachment.

In total, Stefanik raised more than $13 million over that cycle, almost twice as much as the combined fundraising totals from her previous three elections. She raised an additional $2 million for Republican candidates and assembled what her office now describes as one of the five strongest donor email lists among 212 House Republicans.

Even as staff privately encouraged her to moderate her message in the following weeks, Stefanik leaned harder into Trumpism. Her team began regularly insulting critics and reporters on social media. Her transformation was complete when Stefanik, a former White House aide under President George W. Bush and admirer of former House Speaker Paul Ryan, R-Wis., voted against certifying the 2020 election results even after a violent mob stormed the U.S. Capitol on Jan. 6.

Stefanik's evolution is the story of the modern Republican Party, which has come to believe that the path to power and fundraising success runs through Trump, whether party members like him or not. A few Republicans have resisted his influence, including Cheney, but the vast majority has fallen in line even as Trump continues to spread the same disinformation about the 2020 election that inspired the Jan. 6 insurrection.

Trump “has been our strongest supporter of any president when it comes to standing up for the Constitution,” Stefanik said this past week on former Trump aide Steve Bannon's “War Room” podcast.

In the same interview, she again cast doubt about the integrity of the 2020 election, even though allegations about widespread voter fraud have been discredited by senior Trump administration officials and dozens of judges across the country.

Those who have worked closely with Stefanik describe her as a hardworking, smart and disciplined messenger, tenacious in her pursuit of energizing Republican voters and framing the terms of the debate.

She became a policy aide in the Bush White House after graduating from Harvard University in 2006. By the time the 2012 presidential election arrived, she was a well-regarded political operative with strong ties to the Republican establishment. She joined former Minnesota Gov. Tim Pawlenty’s short-lived presidential campaign before going to work for Mitt Romney, the party’s presidential nominee against the Democratic incumbent, Barack Obama.

After the election, Stefanik moved from Washington to her parents’ home in upstate New York with an eye on the U.S. House seat left open by Democrat Bill Owens' retirement. In what was widely considered a swing district, the 30-year-old Stefanik won the race and became the youngest woman, at that time, ever elected to Congress.

She found success with a moderate message focused on bringing a new generation of voters to the Republican Party.

Jeff Graham, the former mayor of Watertown, New York, remembers meeting the fresh-faced Stefanik a year before the election. He quickly became a supporter.

“At first I said, ‘Who the hell is she?’ I went on Google, couldn’t find a lot about her,” he said. “Even though she was young, she had a rich background -- being in the Bush White House and being pals with Paul Ryan."

In her early years in Congress, Stefanik earned a reputation as a studious moderate who stayed close to her district, a massive rural expanse of upstate New York bordered by Vermont to the west and Canada to the north. She paid especially close attention to Fort Drum.

“She put politics aside,” said Carl Zeilman, chairman of the Saratoga County Republican Committee. “She knows how to roll up her sleeves and get things done.”

The decision to support the Ohio moderate was in line with her voting record. Stefanik has a lifetime rating of 48% from the conservative Heritage Action for America and 35% from Club for Growth, among the lowest grades for House Republicans.

In the late spring of 2016, when Trump emerged as the GOP’s presumed presidential nominee, local press noted that she refused to say Trump’s name, promising only to “support my party’s nominee in the fall.”

Stefanik became a more vocal Trump supporter as the election approached, but she regularly reminded voters that she disagreed with him at times. She described his remarks captured on video about sexually assaulting women as “offensive” and “just wrong.”

She warmed to Trump further after he took office. She also started a political action committee, Elevate PAC, designed to bring more Republican women to Congress. She was widely praised for the effort last fall, when 18 of the 30 women she endorsed won.

One was Rep. Ashley Hinson, an Iowa Republican who says she was in constant communication with Stefanik throughout her election. Beyond offering strategic guidance and moral support, Stefanik helped connect Hinson with her network of donors and political contacts in Washington.

“It was an important and very pivotal year for the GOP in terms of telling the story that we were a party of women, minorities and veterans,” Hinson said. “And Elise had a great hand in that.”

Trump was impressed, too.

While Cheney's conservative ratings are far superior to Stefanik's, Trump this past week called Cheney “a warmongering fool who has no business in Republican Party Leadership.”

“Elise Stefanik is a far superior choice, and she has my COMPLETE and TOTAL Endorsement for GOP Conference Chair,” he said in a written statement. “Elise is a tough and smart communicator!”

Graham, the former Watertown mayor, acknowledged that Stefanik has become more “Trumpian,” but like many other Republicans in the rural district, he's generally pleased with the trajectory of her career.

“Our members of Congress up here have not had much time on the national stage," Graham said. “We’re proud of most of it.”

German woman on trial accused of killing 5 of her 6 chi ...

A German woman has gone on trial a ...