Jeff McNeil and Francisco Lindor teamed up to produce all four runs a night after scuffling in the dugout and the New York Mets beat the Arizona Diamondbacks 4-2 Saturday night.

The pair attempted to dismiss Friday's dustup by bizarrely claiming they were arguing over an animal spotted in the clubhouse tunnel — Lindor said it was a rat, McNeil’s story was that it was a raccoon or possum.

No critters Saturday — just a couple All-Star hitters. McNeil hit a two-run homer in the third off Merrill Kelly (2-3), and Lindor had a double, an RBI and scored on a throwing error after a stolen base. 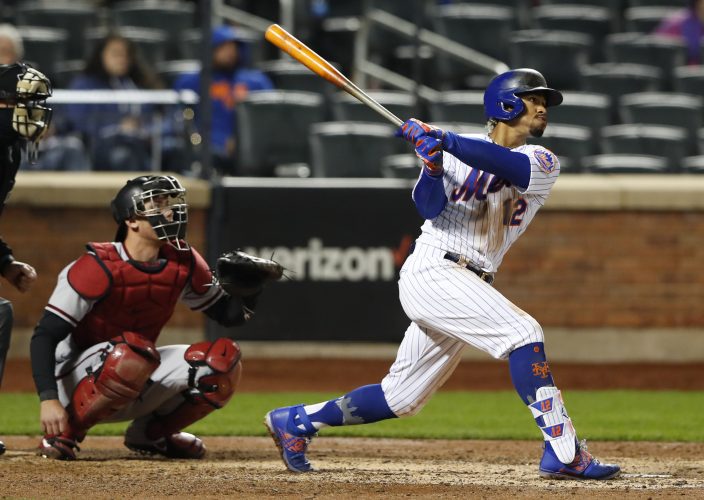 New York Mets' Francisco Lindor follows through on a double against the Arizona Diamondbacks during the fifth inning of a baseball game Saturday, May 8, 2021, in New York. (AP PhotoNoah K. Murray)

Five pitchers combined for an eight-hitter on a bullpen day for the Mets, who have won four straight. The Diamondbacks fell to 0-5 on a six-game trip, during which they have been outscored 29-10.

Opener Tommy Hunter tossed two hitless innings before Joey Lucchesi (1-2) followed and earned the win after allowing one run over 2 1/3 innings. Trevor May earned his first save with the Mets with a one-hit ninth.

Lucchesi drew a walk leading off the third against Kelly. McNeil followed with a homer, after which Lindor drew a walk, stole second — his 100th career theft — and raced home on a two-base throwing error by Diamondbacks catcher Carson Kelly. 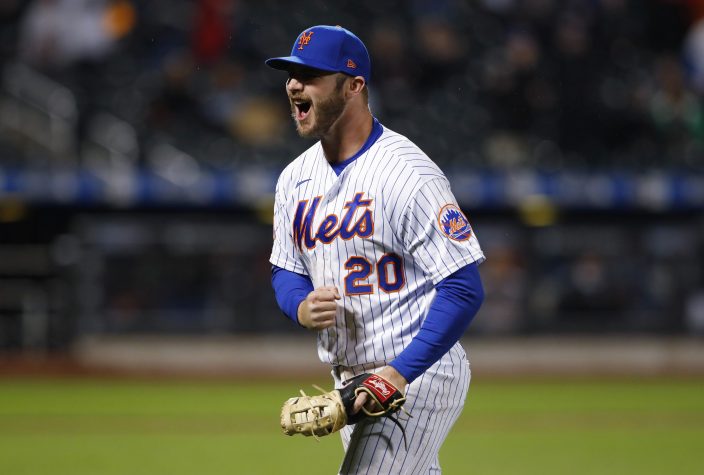 New York Mets first baseman Pete Alonso reacts after the third out against the Arizona Diamondbacks in the seventh inning of a baseball game Saturday, May 8, 2021, in New York. (AP PhotoNoah K. Murray)

In the seventh, McNeil beat out the back end of a potential double-play grounder, stole second and scored on Lindor’s single.

Josh Rojas reached via catcher’s interference in his first two plate appearances for the Diamondbacks, delivered their first hit — a single leading off the sixth — and scored their first run on a groundout by David Peralta.

Arizona was 3 for 11 with runners in scoring position Saturday after going 1 for 16 in such situations Friday. The Diamondbacks left the bases loaded in the seventh against Jeurys Familia. Pinch-hitter Stephen Vogt had an RBI single in the eighth before Aaron Loup stranded stranded runners at the corners by inducing Pavin Smith to hit a comebacker. 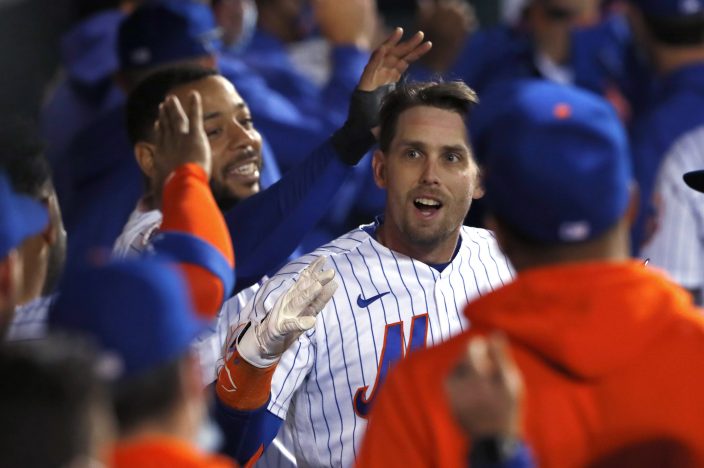 New York Mets' Jeff McNeil celebrates in the dugout after hitting a home run against the Arizona Diamondbacks during the third inning of a baseball game Saturday, May 8, 2021, in New York. (AP PhotoNoah K. Murray) 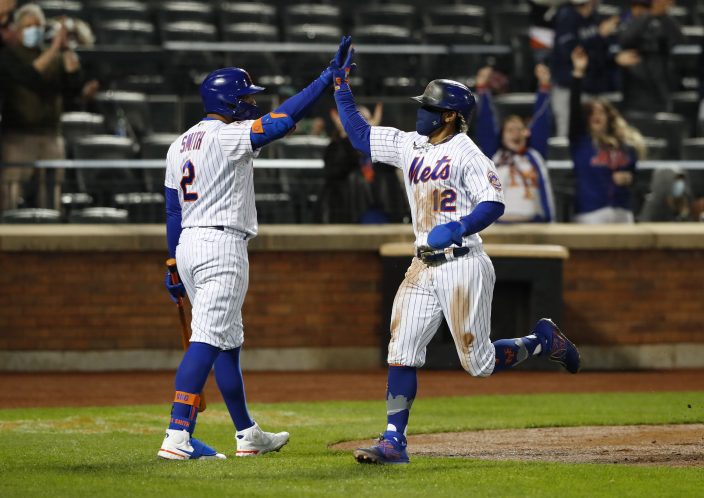 New York Mets' Francisco Lindor (12) is congratulated by Dominic Smith (2) after scoring against the Arizona Diamondbacks during the third inning of a baseball game Saturday, May 8, 2021, in New York. (AP PhotoNoah K. Murray)

Hunter made his first start since Aug. 22, 2012, when he gave up eight runs over three innings for the Baltimore Orioles against the Texas Rangers. He had made 375 relief appearances since.

Diamondbacks: OF Ketel Marte (right hamstring) has increased the intensity of his running and batting practice and could be ready to begin a rehab assignment shortly. Marte was injured April 7. ... Manager Torey Lovullo said LHP Madison Bumgarner (right wrist) is feeling no ill effects from being hit by a pitch while batting against the Miami Marlins Thursday. 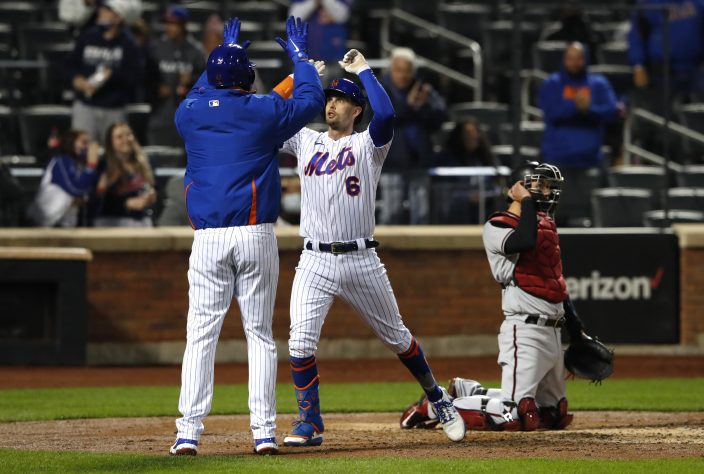 Mets: RHP Noah Syndergaard (Tommy John surgery) and RHP Seth Lugo (right elbow) could start rehab assignments within the next week. Acting general manager Zack Scott said the hope is Lugo can return in late May while Syndergaard wouldn’t be back until sometime in June. ... Scott said the Mets would continue to take things slowly with RHP Carlos Carrasco (right hamstring), who was moved to the 60-day injured list Thursday and can’t return until at least May 29.

Mets: While it is not yet official, both Scott and manager Luis Rojas expressed confidence RHP Jacob deGrom (2-2, 0.51 ERA) would make his first start since April 28. DeGrom was scratched from his scheduled start Tuesday due to a sore right lat.