Rangers rookie center fielder Adolis Garcia threw out Kyle Lewis at the plate on a wild, scrambly play for the final out, and Texas held off the Seattle Mariners 9-8 Saturday night.

Trailing 9-7 with two outs in the ninth inning, the Mariners had Lewis at first base and Mitch Haniger at third when J.P. Crawford blooped a single between three Rangers in left-center field.

Haniger easily scored and when the ball ricocheted off Garcia, Lewis raced toward to the plate. Garcia recovered and threw to catcher Jonah Heim, who made the game-ending tag. 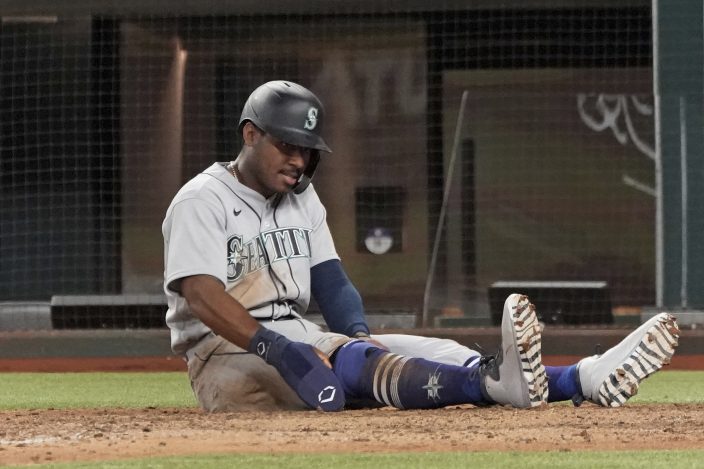 Seattle Mariners baserunner Kyle Lewis sits at home plate after being tagged out to end a baseball game in the ninth inning against the Texas Rangers, Saturday, May 8, 2021, in Arlington, Texas. (AP PhotoLouis DeLuca)

Both teams had leadoff homers in the eighth, with Luis Torrens putting the Mariners up 7-6. Garcia started the bottom half of the inning against reliever Anthony Misiewicz (2-2) with a shot to straightaway center, his eighth homer this year being his first at home.

Khris Davis then made his Rangers debut with a pinch-hit single after coming off the injured list earlier in the day, and scored on Heim's double. 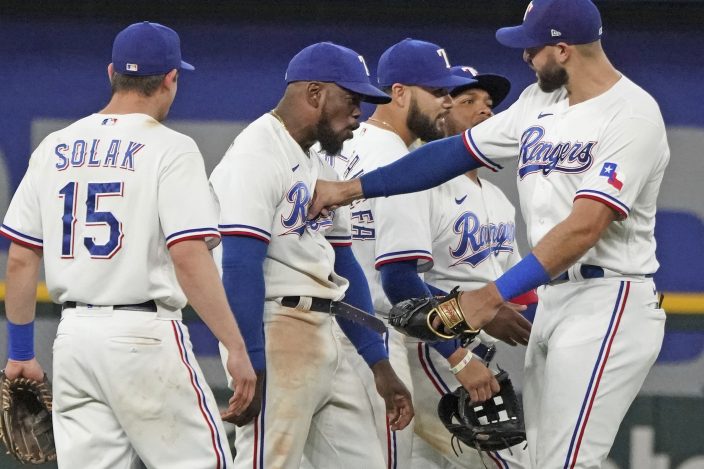 Texas Rangers center fielder Adolis Garcia, second from left, absorbs a playful punch from teammate Joey Gallo, right, as they celebrate their win over the Seattle Mariners after a baseball game Saturday, May 8, 2021, in Arlington, Texas. (AP PhotoLouis DeLuca)

With runners on second and third, Crawford fielded a grounder to shortstop and threw home in plenty of time to get Charlie Culberson. But Torrens never tagged him — it wasn't a force play, and the run scored to make it 9-7.

Davis and Heim were both acquired by Texas in the February deal that sent longtime Rangers shortstop Elvis Andrus to Oakland.

John King (4-1), the third Texas pitcher, threw 1 1/3 innings before Ian Kennedy got his AL-leading 10th save in as many chances. 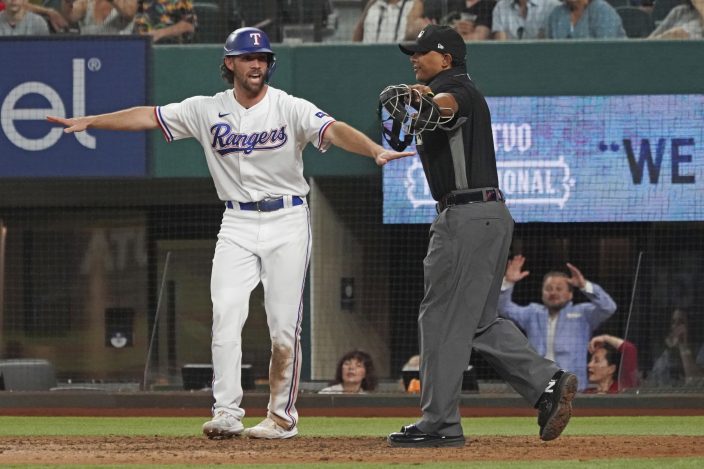 Texas Rangers base runner Charlie Culberson signals himself safe at home as he scores a run against the Seattle Mariners in the eighth inning of a baseball game Saturday, May 8, 2021, in Arlington, Texas. (AP PhotoLouis DeLuca)

Evan White ended his 0-for-27 slump with a two-run homer and later added an RBI double for the Mariners, who blew an early 4-0 lead and had their eight-game winning streak against the AL West rivals snapped.

Seattle had opened the series with a 5-4 victory Friday night, its eighth win in a row against Texas, going back to last season. That matched the Mariners' longest winning streak in the series set May 3, 1995, in a game featuring three future Hall of Fame players — Ken Griffey Jr. and Edgar Martinez for Seattle, and Ivan Rodriguez for the Rangers.

Isiah Kiner-Falefa drove in three runs, including a two-run single in the sixth that put Texas up 6-5. Kyle Seager's solo homer in the seventh. Texas Rangers right fielder Joey Gallo tosses a ball to a fan after catching it in the fifth inning of a baseball game against the Seattle Mariners, Saturday, May 8, 2021, in Arlington, Texas. (AP PhotoLouis DeLuca)

Seattle led 4-0 in the second against Rangers starter Kohei Arihara after Dylan Moore’s leadoff bunt single was followed by White’s second homer of the season. Two innings later, Moore and White had back-to-back doubles for a 5-3 lead against Arihara, who didn’t make it through that inning.

Gallo hit an opposite-field shot leading off the second, and his two-run homer in the fourth got the Rangers within 5-3. He has six homers this season, four coming in the last six games.

It was Gallo's ninth career multihomer game but first in their new ballpark that opened last season. 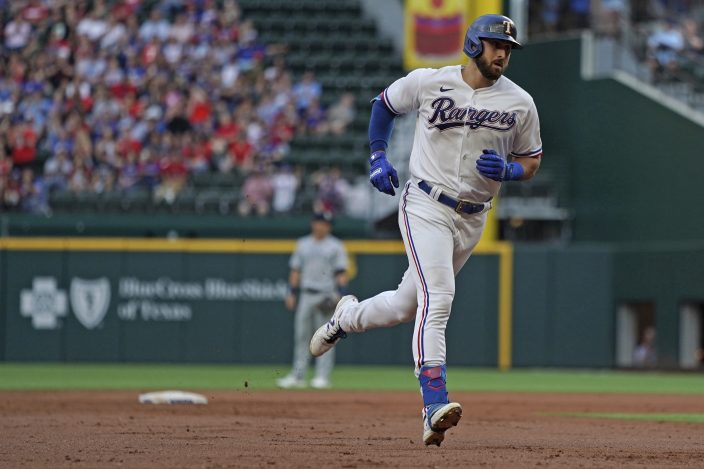 Texas Rangers center fielder Joey Gallo (13) rounds the bases after hitting a home run against the Seattle Mariners in the second inning of a baseball game Saturday, May 8, 2021, in Arlington, Texas. (AP PhotoLouis DeLuca)

Mariners: RHP Ljay Newsome suddenly exited the game after 0-1 pitch to Andy Ibañez with two outs in the fourth. A trainer visited the mound and the team later said Newsom left because of right elbow inflammation. Newsome gave up three runs on four hits when following opener Erik Swanson.

Rangers: Davis had opened the season on the injured list because of a left quad strain suffered in a spring training game March 23. To make room on the roster, OF Eli White (.127 batting average in 20 games) was optioned to Triple-A Round Rock.