Ehire Adrianza capped a night full of comebacks for Atlanta with a game-ending RBI single in the 12th inning, helping the Braves stun the Philadelphia Phillies for a chaotic 8-7 victory Saturday.

Atlanta overcame deficits of 3-1 in the ninth and 4-3 in the 11th before rallying from a 7-4 hole in the 12th — all with Ronald Acuña Jr. out of the game after he was hit by a pitch in his left little finger in the seventh. X-rays were negative.

Philadelphia Phillies' Jean Segura (2) is congratulated upon his return to the dugout after hitting a home run off Atlanta Braves pitcher Ian Anderson in the first inning of a baseball game Saturday, May 8, 2021, in Atlanta. (AP PhotoBen Margot)

“We looked like ourselves tonight the way these guys came roaring back,” said Braves manager Brian Snitker. “They never quit. We’ve been witnessing that the last three or four years and they showed it tonight, the heart of this team.”

William Contreras tied it at 7 with a three-run double off right-hander Enyel De Los Santos (0-1) before scoring on Adrianza's hit. Contreras' rip scored designated runner Ozzie Albies along with Austin Riley, who walked, and Dansby Swanson, who singled. 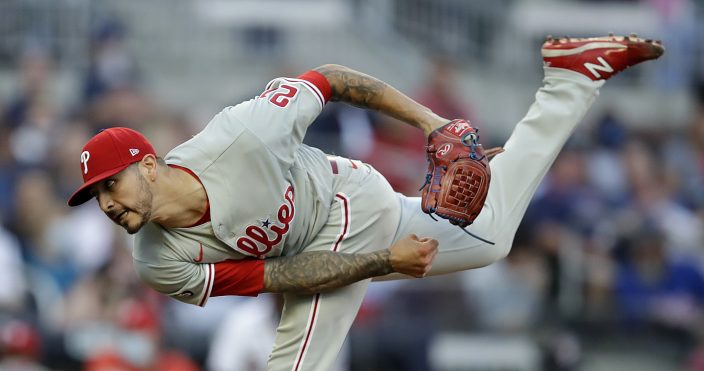 Philadelphia Phillies pitcher Vince Velasquez works against the Atlanta Braves in the first inning of a baseball game Saturday, May 8, 2021, in Atlanta. (AP PhotoBen Margot)

Philadelphia had a three-run lead after Jacob Webb (1-1) threw the ball to the backstop on Harper's bases loaded grounder in the top of the 12th, which allowed two runs to score. Webb failed to cover the plate after his errant throw, allowing Scott Kingery and Andrew McCutchen to score. J.T. Realmuto added a run-scoring single.

Phillies closer Héctor Neris blew a 3-1 lead in the ninth. After walking Adrianza with two outs, Neris gave up Pablo Sandoval’s fourth pinch-hit homer, the most in the majors, to force extra innings.

It was the second blown save in eight chance for Neris. Manager Joe Girardi said he still has confidence in his closer. 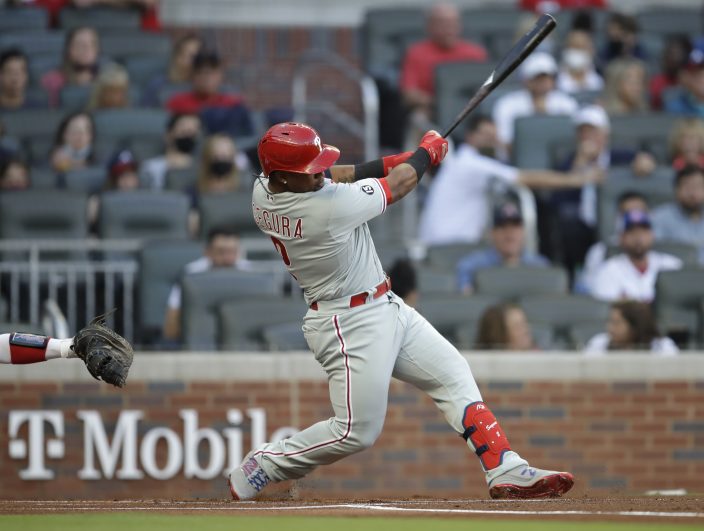 Philadelphia Phillies' Jean Segura swings for a home run off Atlanta Braves pitcher Ian Anderson in the first inning of a baseball game Saturday, May 8, 2021, in Atlanta. (AP PhotoBen Margot)

“Hector has done a good job for us,” Girardi said. “He’s pitched well for us, so yeah.”

Jean Segura had three hits, including a homer, for the Phillies.

Segura, who had four hits in Friday night’s 12-2 win in his return from the 10-day injured list with a right quadriceps strain, hit a low liner that barely cleared the left-field wall for his first-inning homer off Ian Anderson. 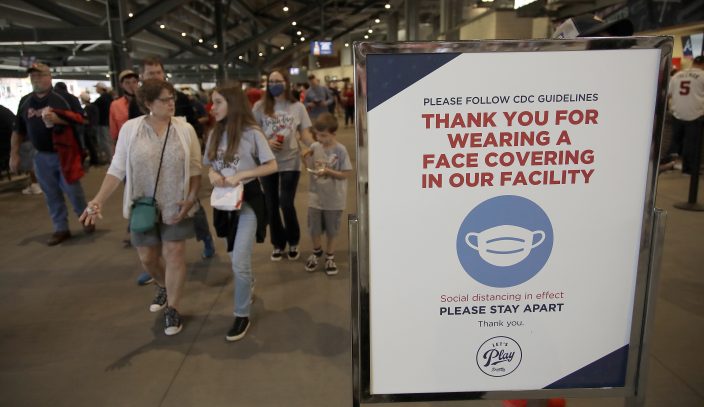 People make their way into Truist Park as they pass signage thanking fans for wearing a face mask per CDC guidelines prior to the baseball game between the Atlanta Braves and the Philadelphia Phillies on Saturday, May 8, 2021, in Atlanta. The Braves have opened the park to full attendance on the weekend for the first time in a year. (AP PhotoBen Margot)

Freddie Freeman ended a career-worst, 0-for-22 drought when he led off the sixth with a home run off Vince Velasquez into the Braves’ bullpen behind the center-field wall.

Velazquez gave up two hits and one run in 5 1/3 innings. 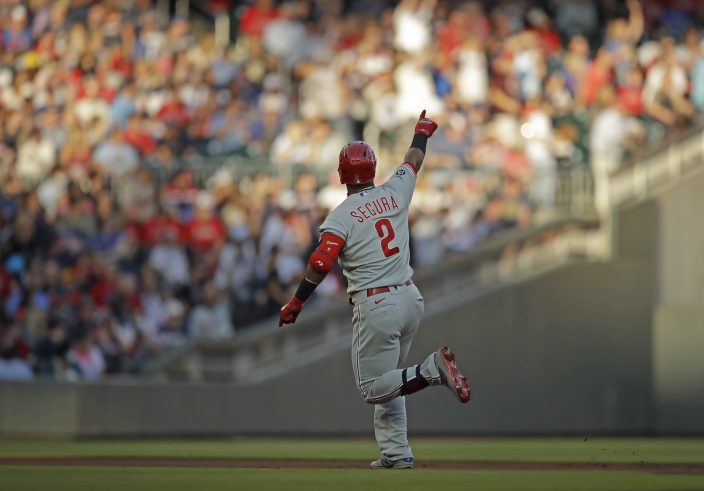 Braves: RHP Chris Martin, on the 10-day IL with right shoulder inflammation, was scheduled to throw at Triple-A Gwinnett. Snitker said Martin says “he feels real good.” ... RHP Carl Edwards Jr. was designated for assignment after giving up three runs and recording only one out on Friday night. Edwards, who was with the team for only one day, was the second reliever to be designated for assignment in two days, following RHP Nate Jones. INF Sean Kazmar was optioned to Triple-A Gwinnett while RHP Victor Arano and RHP Jaseel De La Cruz were recalled. 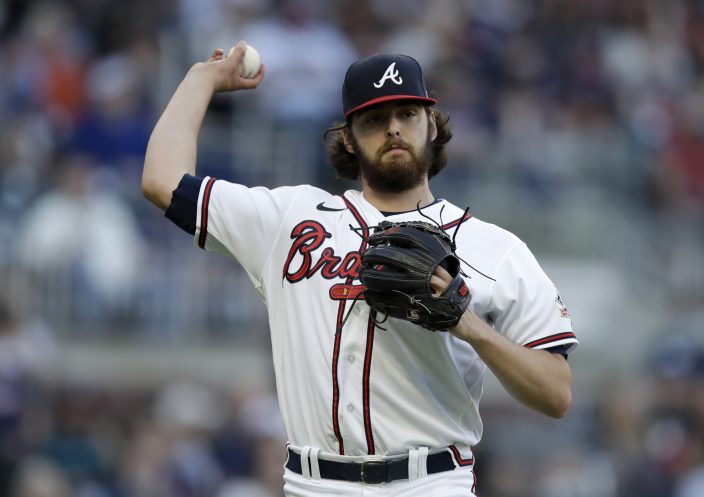 Atlanta Braves pitcher Ian Anderson throws to first base to get an out against Philadelphia Phillies' Andrew McCutchen in the first inning of a baseball game Saturday, May 8, 2021, in Atlanta. (AP PhotoBen Margot)

The Braves say Acuña, whose 10 homers are tied for the major league lead, is day to day with a finger contusion. He was struck by a 98 mph fastball from Sam Coonrod.

“He was in good shape when I saw him after the game,” Snitker said. “... I think we dodged the bullet. I think the ball hit the end of the bat and pinched his finger a little. .. Hopefully he’ll be right back in there tomorrow.” 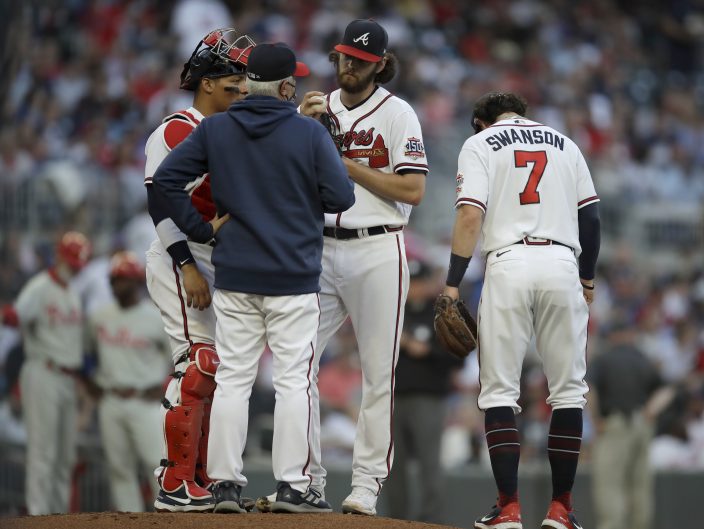 Atlanta Braves pitcher Ian Anderson, third from left, speaks with pitching coach Rick Kranitz, second from left, in the first inning of a baseball game against the Philadelphia Phillies Saturday, May 8, 2021, in Atlanta. (AP PhotoBen Margot)

Albies hit a one-out triple in the fourth for Atlanta’s first hit. McCutchen tried to make a backhand catch in the left field corner, but the ball hit his left wrist above his glove before he ran into the padded wall in foul territory. McCutchen leaned over in pain, with the ball at his feet, before finally recovering to throw the ball to the infield. 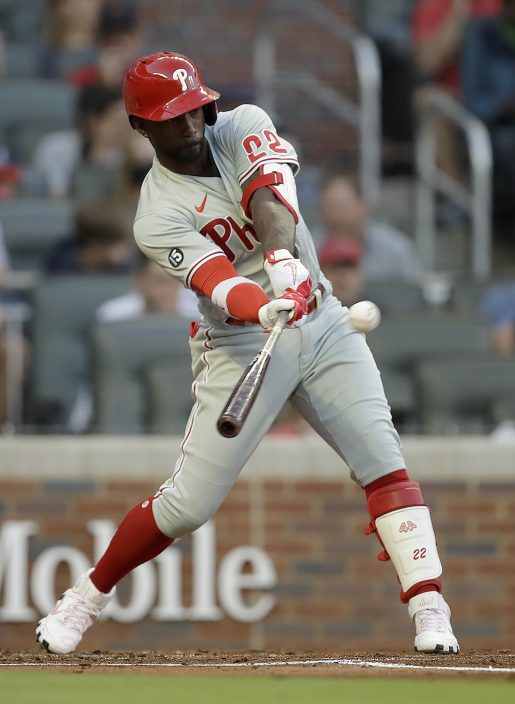 Philadelphia Phillies' Andrew McCutchen swings for an RBI-single off Atlanta Braves pitcher Ian Anderson in the second inning of a baseball game Saturday, May 8, 2021, in Atlanta. (AP PhotoBen Margot)

McCutchen remained in the game.

Braves RHP Huascar Ynoa and Phillies RHP Aaron Nola, each looking for his fourth win, are the scheduled starters when the weekend series concludes on Sunday night. 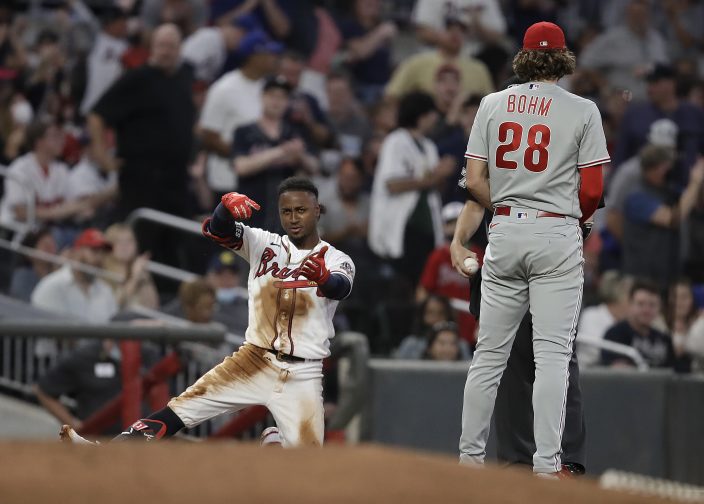 Barry Cohen and his wife were soun ...

Cristiano Ronaldo is racking up th ...

Phillies offense breaks out in 12-2 rout of Morton, Braves