Kevin Durant scored 33 points, including five free throws over the last 21 seconds, and Kyrie Irving added 31 as the Brooklyn Nets snapped a four-game skid by storming back to beat the short-handed Denver Nuggets 125-119 on Saturday night.

The Nets moved a half-game in front of Milwaukee for the second seed in the Eastern Conference. Brooklyn remained three games behind East-leading Philadelphia.

After trailing by as many as 21 points in the first half, the Nets took the lead for good at 111-110 on a 3-pointer by Joe Harris with 6:12 remaining. It was their first lead since 35 seconds into the game. 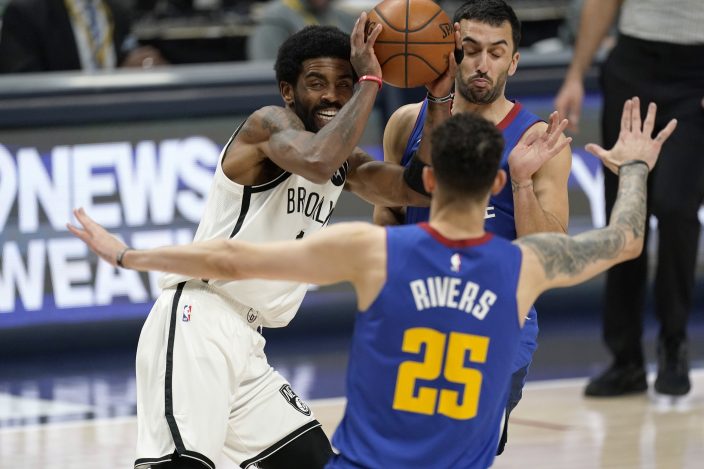 Brooklyn Nets guard Kyrie Irving is defended by Denver Nuggets guards Austin Rivers, front, and Facundo Campazzo during the second half of an NBA basketball game Saturday, May 8, 2021, in Denver. (AP PhotoDavid Zalubowski)

But it was far from easy down the stretch. Nikola Jokic had a chance to give the Nuggets the lead with 23.9 seconds left, only to see his turnaround miss. Durant made two free throws to make it 122-119.

Durant was fouled soon after Jokic missed a shot on the other end. The Nuggets big man was upset over the no-call and lost his cool, picking up a technical with 9.1 seconds left. Durant made three free throws to secure the win.

Blake Griffin had 16 of his 20 points in a pivotal third quarter to help the Nets climb back into the game. Denver Nuggets forward Michael Porter Jr. dunks against the Brooklyn Nets during the first half of an NBA basketball game Saturday, May 8, 2021, in Denver. (AP PhotoDavid Zalubowski)

Jokic had 29 points and Michael Porter Jr. added 28 points, including six 3-pointers, as the Nuggets had their seven-game home winning streak snapped. It was their final regular-season game this season at Ball Arena, where the Nuggets finished 25-11.

Facundo Campazzo had 19 points and little-used Markus Howard chipped in a career-best 13 points as the Nuggets went with unconventional lineups after playing the night before at Utah. Nets: G James Harden was out for a 17th straight game with a right hamstring strain. ... Durant had 11 boards. ... The Nuggets had a 27-1 edge in second-chance points. 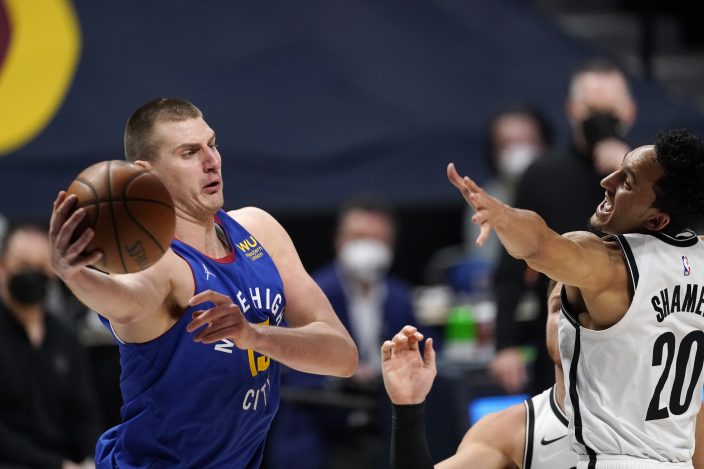 Nuggets: Porter scored Denver's opening 11 points. ... This was the largest blown lead in a loss this season for Denver. The previous biggest was 20 at Washington on Feb. 17.

Brooklyn coach Steve Nash spoke of Jokic in high regard. 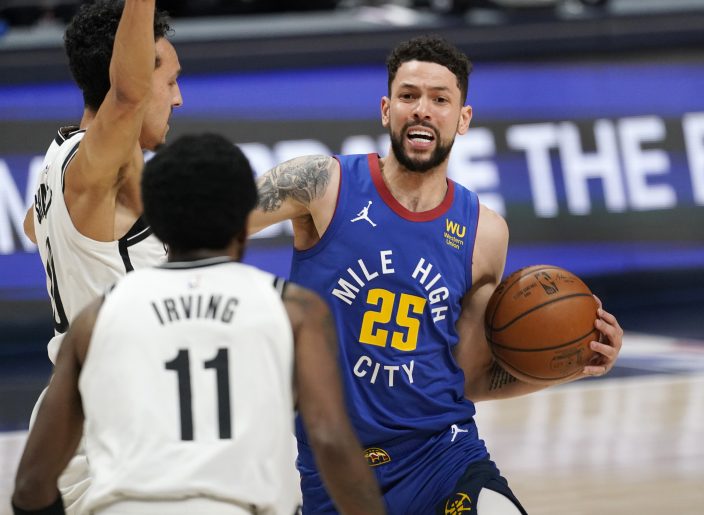 “Clearly, I think Jokic is the MVP this year,” Nash said. “He’s kind of gone wire-to-wire at this high level, and makes his teammates better, makes everything go. They lose Jamal Murray and they haven’t really skipped a beat. That shows how good he is.”

Nuggets: At Charlotte on Tuesday as Denver concludes the season with four straight road games.