Stephen Curry scored 49 points in 29 minutes and matched his season best with 11 3-pointers and the Golden State Warriors beat the Oklahoma City Thunder 136-97 on Saturday night.

Curry shot 14 of 26 overall and 11 of 21 beyond the arc while fans serenaded him with chants of “MVP! MVP!” as they have ever since being allowed back in Chase Center. He made five 3s in the first quarter, one in the second and five more in the third before sitting out the entire fourth quarter.

“I appreciate the love,” Curry said. “Nights like tonight, you want to get off to a good start knowing we should win this game. When you see the first two go down you start to find another level of confidence … and try to create an avalanche from there.” 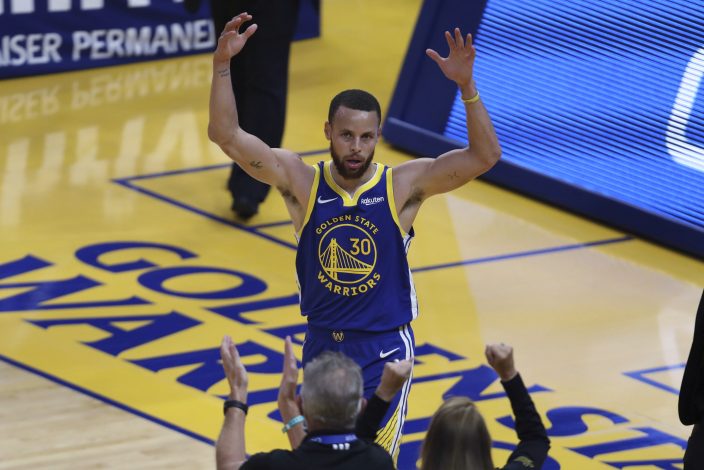 Golden State Warriors' Stephen Curry waves to the crowd after scoring against the Oklahoma City Thunder during the first half of an NBA basketball game in San Francisco, Saturday, May 8, 2021. (AP PhotoJed Jacobsohn)

It’s the fifth time in the last 15 games and seventh game overall this season that Curry has had 10 or more 3s in a game, breaking his own single-season record of six set in 2018-19.

“It seems like he’s just always spectacular these days and tonight he topped it, like really spectacular,” Warriors coach Steve Kerr said. “When he got going in the third, we had about 4,000 fans in the stands and you could hear ever one of them in anticipation of the ball going into the hoop. It’s amazing. He’s just an incredible player. In an era where the 3-point shot is king, Steph is the best one of them all.”

Draymond Green had 15 points and 13 assists to help the Warriors to their second win over the Thunder in three days. Andrew Wiggins scored 18 points, and Jordan Poole had 16. 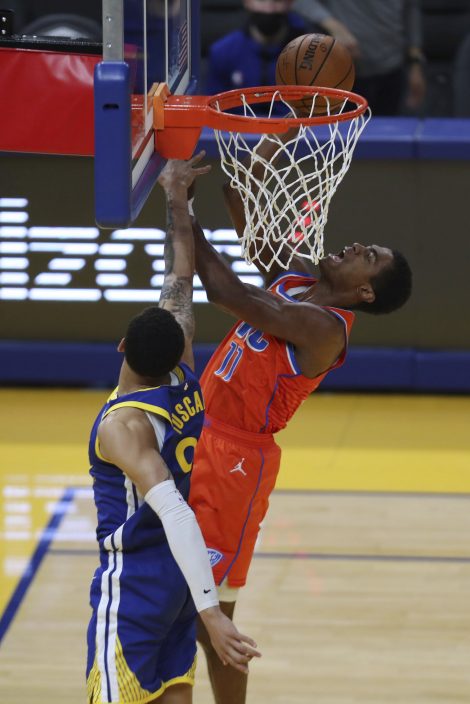 Golden State remained a half-game ahead of Memphis for eighth place in the West. The two teams play each other in the regular season finale May 16 at Chase Center.

Svi Mykhailiuk scored 17 points and Luguentz Dort added 16 for Oklahoma City. The Thunder have lost six straight and 20 of 21.

“(Curry) puts a ton of pressure (on), even if he starts 0 for 5,” Thunder coach Mark Daigneault said. “That’s what opens everything up for them. He had it going tonight. We didn’t do enough.” Golden State Warriors' Draymond Green hangs from the rim after scoring against Oklahoma City Thunder's Darius Bazley during the first half of an NBA basketball game in San Francisco, Saturday, May 8, 2021. (AP PhotoJed Jacobsohn)

Curry got hot early and never let up. He scored 24 points in the first quarter — one fewer than the Thunder had as a team — and went 7 for 7 on free throws.

That didn’t include what was arguably Curry’s most dramatic highlight on a shot he wasn’t given credit for.

The 33-year-old dribbled behind his back at the top of the arc, drove near the key then flipped an off-balance, one-handed shot off the glass and in, but referees ruled that Curry had been fouled by Josh Hall before getting the shot off. 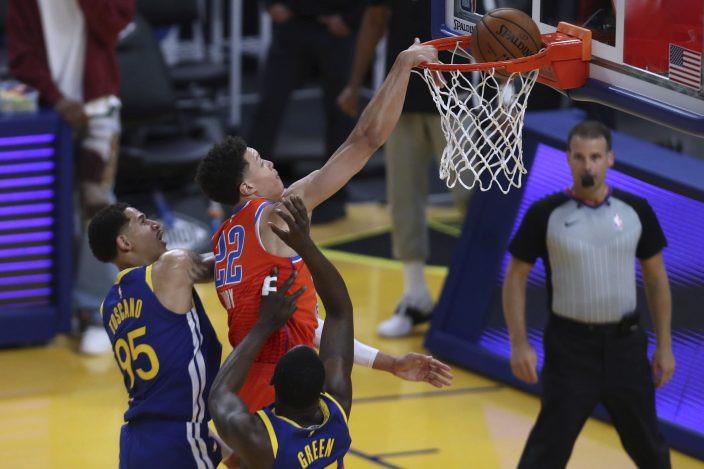 “Steph puts on a show every night,” Warriors center Kevon Looney said. “Sometimes you take it for granted. It seemed like one play all five guys were holding him and he was able to get up a shot and make it.”

After sitting out most of the second quarter, Curry made back-to-back 3s and added another as part of a 19-6 run to start the third.

In addition to scoring 24 points in the first quarter, Curry poured in 22 in the third. He is the first player in the NBA to have two 20-point quarters in the same game since doing it against the Washington Wizards on Oct. 24, 2018.

Green and Oklahoma City’s Isaiah Roby were assessed offsetting technical fouls coming out of halftime after both the two exchanged heated words at the end of the second quarter. Players from both teams were headed to their respective locker rooms when Green and Roby got into the verbal altercation.

Thunder: Ty Jerome did not play after waking up with a calf strain. … This marks the first time Oklahoma City has been swept in the season series with Golden State since 2016-17.

Warriors: Curry has scored 40 or more in 10 games this season. … Eric Paschall has been able to scrimmage some with his teammates but remains doing mostly individual and conditioning drills as he works his way back from a left hip flexor strain. Paschall has missed 19 games because of the injury.

Thunder: Take a short trip north to Sacramento on Sunday for the first half of a back-to-back against the Kings. The teams play again at Golden 1 Center on Tuesday.

Warriors: Face the Utah Jazz on Monday night. The two split a pair of games earlier this season, the home team winning each time.