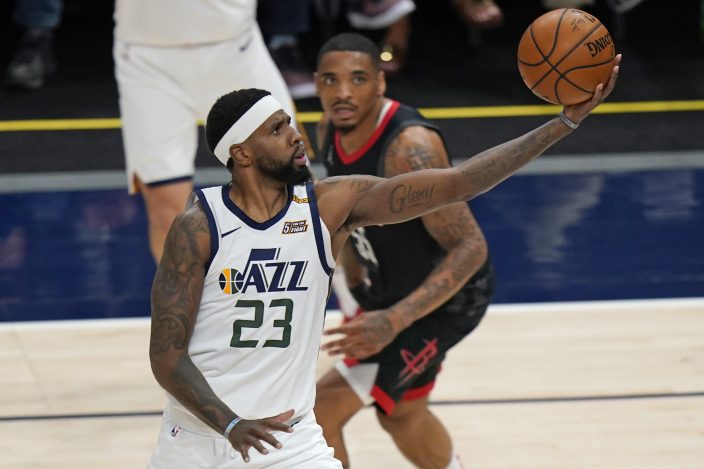 Houston Rockets forward DaQuan Jeffries, rear, looks on as Utah Jazz forward Royce O'Neale (23) lays the ball up during the first half of an NBA basketball game Saturday, May 8, 2021, in Salt Lake City. (AP PhotoRick Bowmer)

“We just had to really fight through mentally. And just keep pushing ... that’s how we stuck out this win, but I ain’t going to lie to you: This season has been grueling and tiring, but it is what it is and we came here to work,” Clarkson said.

Niang took advantage of some post-ups in the paint and was a sharpshooter from beyond the arc. Starting just his eighth game, Niang scored 10 points in the third quarter and his 3-pointer with 2:50 left in the period gave Utah its largest lead, 96-75.

“I know he’s gonna be at the right spot at the right time,” Utah's Joe Ingles said of Niang. “If I get in the lane and I key to the corner, he’s going to be somewhere in that area and he will definitely shoot it so it’s a good look for us, when he’s out there playing like that with confidence.” 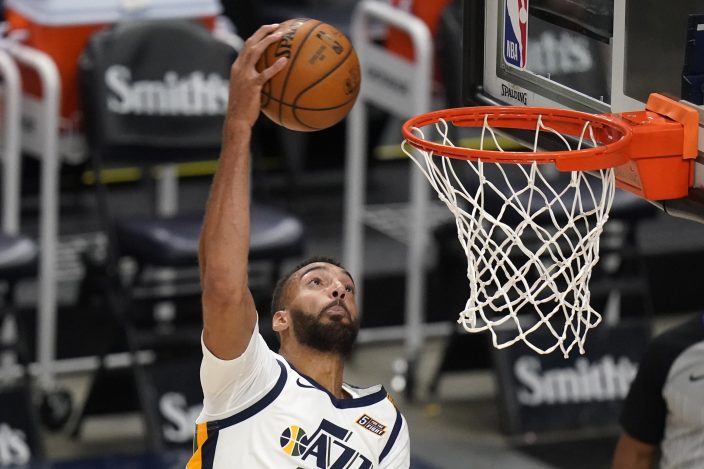 Utah Jazz center Rudy Gobert goes to the basket against the Houston Rockets during the second half of an NBA basketball game Saturday, May 8, 2021, in Salt Lake City. (AP PhotoRick Bowmer)

The usually mild-mannered Niang was so fired up, he drew a technical for taunting after draining a 3 that tied his career high of 24 early in the final period. He was 6 of 8 on 3-pointers.

“I usually hold my emotions, and I just happened to lose my cool. That’s not who I am or aspire to be,” Niang said. “I thought he had brushed me in the face on purpose. So I told him that he was too late, like, he wasn’t going to get to my shot anyway.”

Rudy Gobert had 13 points and 14 rebounds for the Jazz. 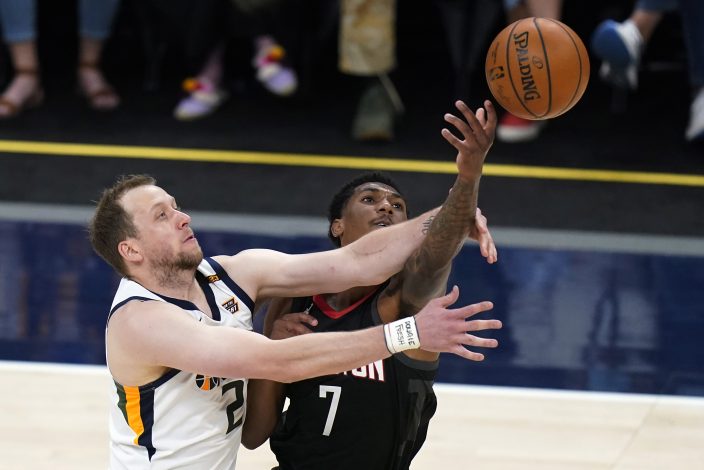 Utah Jazz guard Joe Ingles (2) and Houston Rockets guard Armoni Brooks (7) reach for the ball during the first half of an NBA basketball game Saturday, May 8, 2021, in Salt Lake City. (AP PhotoRick Bowmer)

The Rockets have lost five straight and 20 of their past 23 games.

“They fought hard and they battled. Another hard-fought game just like last night. Again, I was super proud of this group,” coach Stephen Silas said.

Khyri Thomas and KJ Martin each had career highs of 27 for Houston. Thomas has scored 47 in two games with the Rockets, and Martin marked his third straight 20-point game and fourth of his career.

“I just look at it as an opportunity to go out and play basketball. I love to do it, so I just come out every night and compete as hard as I can,” Martin said.

Both teams were playing the second night of back-to-back, which led to some sloppy play. The Jazz improved to 12-2 on zero days rest.

The undermanned Rockets used a starting lineup with Martin at 6-foot-7 as the tallest player to face the 7-foot-1 Gobert. Danuel House Jr. and D.J. Augustin moved off the injury report and onto the court for first time in weeks to give Houston eight available players.

Rockets: At Portland on Monday night.