Allegiance to a lie has become a test of loyalty to Donald Trump and a means of self-preservation for Republicans.

Trump's discredited allegations about a stolen election did nothing to save his presidency when courtrooms high and low, state governments and ultimately Congress — meeting in the chaos of an insurrection powered by his grievances — affirmed the legitimacy of his defeat and the honesty of the process that led to it.

Now those “Big Lie” allegations, no closer to true than before, are getting a second, howling wind. 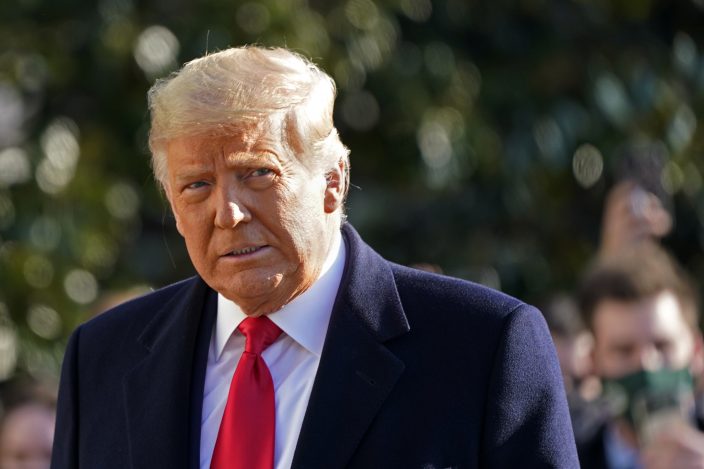 FILE - In this Jan. 12, 2021, file photo President Donald Trump walks to board Marine One on the South Lawn of the White House in Washington. Trump’s discredited allegations about a stolen election did nothing to save his presidency months ago. Courtrooms, state governments and ultimately Congress affirmed the legitimacy of his defeat and the honesty of the process. (AP PhotoGerald Herbert, File)

Republicans are expected to believe the falsehoods, pretend they do or at bare minimum not let it be known that they don’t. State Republican leaders from Georgia to Arizona have been flamed by Trump or his followers for standing against the lies.

Only a select few Republicans in Washington are defying him, for they, too, know that doing so comes with a cost.

Liz Cheney, lifelong conservative and daughter of a vice president once loved by the Republican right while earning the nickname Darth Vader, was willing to pay it. 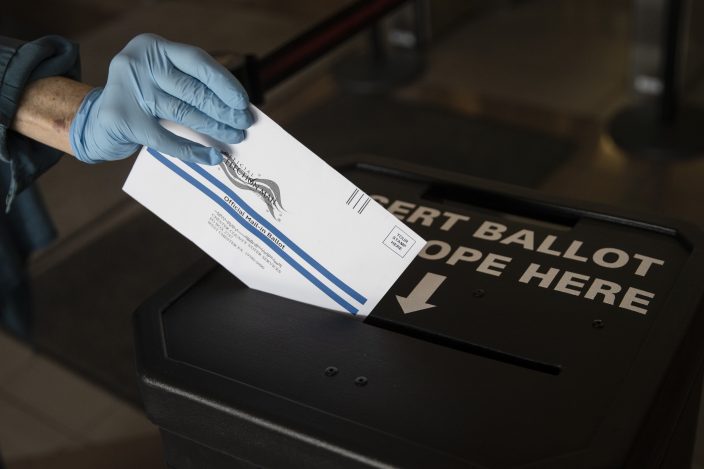 FILE - In this May 28, 2020, file photo a voter casts her mail-in ballot at in a drop box in West Chester, Pa., prior to the primary election. Former President Donald Trump’s discredited allegations about a stolen election did nothing to save his presidency months ago. Courtrooms, state governments and ultimately Congress affirmed the legitimacy of his defeat and the honesty of the process. (AP PhotoMatt Rourke, File)

“History is watching,” the Wyoming congresswoman wrote as House Republicans prepared to strip her of her No. 3 leadership position this coming week over her confrontation with Trump. “Republicans need to stand for genuinely conservative principles, and steer away from the dangerous and anti-democratic Trump cult of personality.”

Everyone enmeshed in Trump’s relentless election claims agrees a “Big Lie” is at the heart of the matter. President Joe Biden says so. Cheney said so. Dominion Voting Systems alleges in a massive lawsuit that Trump lawyer Rudy Giuliani “manufactured and disseminated the ’Big Lie.'”

Trump tried to appropriate the phrase by turning it against his accusers, a pattern from his presidency when he railed against “fake news” after having his own called out. 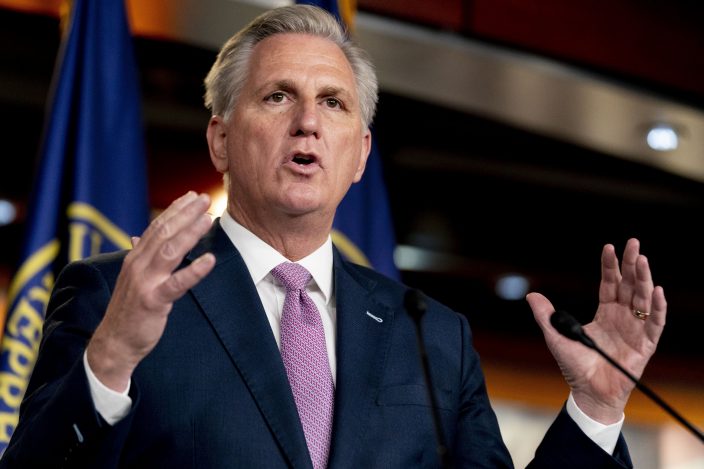 FILE - In this April 22, 2021, file photo, House Minority Leader Kevin McCarthy of Calif., speaks during his weekly press briefing on Capitol Hill in Washington. McCarthy is leading his party to an inflection point. House Republicans are preparing to dump Rep. Liz Cheney from the No. 3 leadership position. If so, McCarthy will have transformed what’s left of the party of Lincoln more decisively into the party of Trump. (AP PhotoAndrew Harnik, File)

“The Fraudulent Presidential Election of 2020 will be, from this day forth, known as THE BIG LIE!” he said in a statement last week, delivered as if by force of proclamation.

Trump led his party in an election that cost Republicans the presidency and their Senate majority while leaving them short of taking over in the House. For all that, the party's brute-force Trump faction is ascendant as Republicans place their bets on the energy and passions of his core supporters in the approach to the midterm elections next year.

That bet requires a suspension of disbelief when Trump makes his fantastical claims about a rigged election. 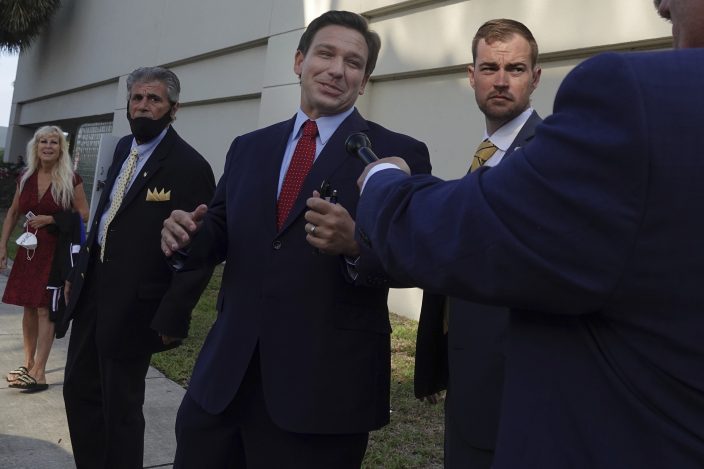 Florida Gov. Ron DeSantis leaves the site of an appearance, Thursday, May 6, 2021, in West Palm Beach, Fla. DeSantis has signed a sweeping elections bill into law that he and other Republicans said would place guardrails against fraud, even though there were no signs of voter irregularities in the November presidential election. (Joe CavarettaSouth Florida Sun-Sentinel via AP)

“If you’ve got to say things you don’t believe in, as long as that leads to a win, that’s what’s most important,” he told MSNBC. “If you think you can win by fanning these flames of disinformation, why wouldn’t you do that?” He added: “If you have no integrity."

In the running to replace Cheney in the House GOP leadership, Rep. Elise Stefanik of New York in recent days endorsed Trump's false claims of voting fraud and of a ballot recount being conducted in Arizona's Maricopa County by a company whose leader has shared unfounded conspiracy theories about the election. 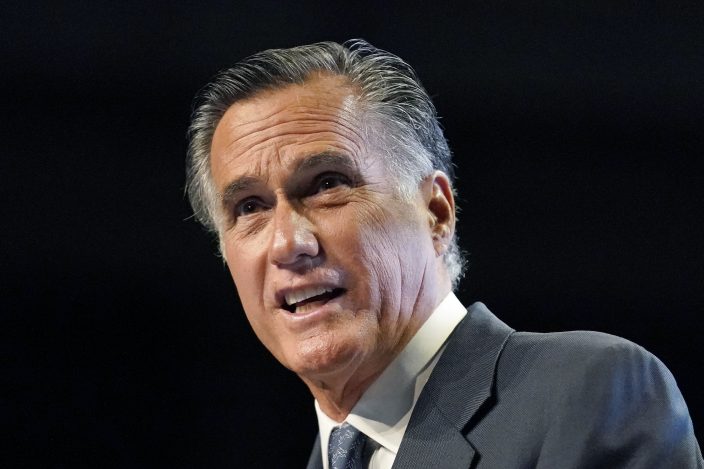 Artifice unfolded in Florida as Republican Gov. Ron DeSantis staged a fake signing ceremony Thursday on Fox News for a bill he actually signed elsewhere. The bill imposes new voting restrictions to fix problems state officials acknowledged haven't really been found, but might be in the future.

Republicans are pushing voting curbs in multiple states as well as the federal level even as state leaders have pronounced Trump’s case baseless.

“They can't change the 2020 election but they can use it as a predicate for new restrictive voting laws,” election law scholar Richard Hasen of University of California, Irvine, said of the Trump loyalists. 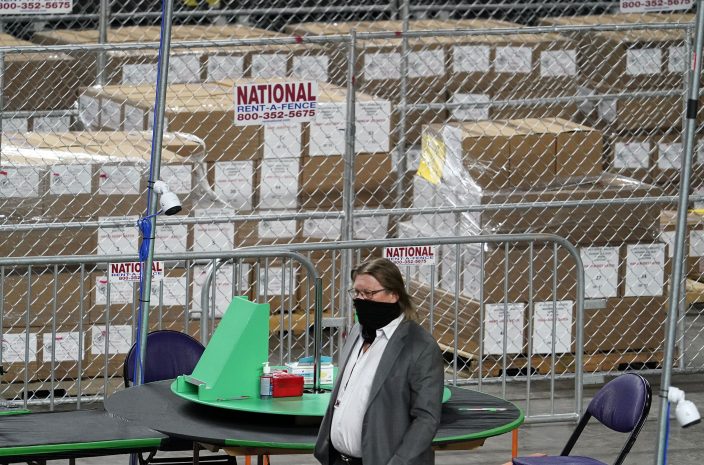 Maricopa County ballots cast in the 2020 general election are being examined and recounted by contractors working for Florida-based company, Cyber Ninjas, who was hired by the Arizona State Senate at Veterans Memorial Coliseum in Phoenix, Thursday, April 29, 2021. (Rob SchumacherThe Arizona Republic via AP, Pool)

“It’s extremely troubling for American democracy and undermines voter confidence in the integrity of the election process. Very dangerous.”

In a statement Friday, Trump asserted: “At 6:31 in the morning on November 4th, a dump of 149,772 votes came in to the State of Michigan. Biden received 96% of those votes and the State miraculously went to him.”

No vote dump happened. The morning after November’s election, Trump allies shared a map of Michigan that appeared to show Biden getting a huge spike of votes in an update. But the online news organization that was tracking results and published that map confirmed the same day it had made a data error and corrected it.

Trump went on: "Likewise, at 3:42 in the morning, a dump of 143,379 votes came in to the state of Wisconsin, also miraculously, given to Biden. Where did these ‘votes’ come from?”

Nothing nefarious here, either. Biden's early-morning comeback was simply the result of absentee and early votes being counted in Wisconsin’s largest city and reported at once. Milwaukee counts absentee ballots in one centralized location and reports the results in a batch.

Election officials finished counting the city’s roughly 169,000 absentee ballots and uploaded the results about 3 a.m. after Election Day. Milwaukee police then escorted the city’s elections director to the county courthouse to deliver thumb drives with the data.

The outstanding ballots at that point overwhelmingly broke for Biden. A Democrat winning in a big city surprises no one.

In Utah a week ago, Sen. Mitt Romney was roundly booed by members of his party, while prevailing in a censure vote, for criticisms of Trump that hecklers called treasonous. Romney voted in both of Trump's impeachment trials to convict him; Cheney split her decision in the two House impeachments.

For four years Mike Pence epitomized the loyal vice president. But his pro forma certification of Biden's victory Jan. 6 put him on the outs with Trump and clouded his political future, though he had no authority under the Constitution, congressional rules, the law or custom to stand in Biden's way.

In one of his broadsides last week, Trump assailed Cheney, Pence and labeled Sen. Mitch McConnell “gutless and clueless” in one go. McConnell, the Senate Republican leader, voted for Trump's acquittal but pronounced him “practically and morally responsible” for provoking the Jan. 6 insurrection, drawing the ex-president's enduring enmity.

Since then, McConnell and Pence have turned the other cheek. Darth Vader's daughter didn't. But at the moment, the force seems to be with Trump.