There was no shortage of tips about who killed Pamela Pitts, a rowdy but compassionate 19-year-old whose body was found burned beyond recognition in a pile of trash in 1988.

A Satanic cult. A drug dealer. A cowboy. An ex-lover. A guy nicknamed “Halftrack.” Or maybe it was an overdose at a spot in central Arizona where people went to party.

It would take more than 30 years, some prison calls and an eyebrow-raising plea deal before a convicted murderer would confess and the mystery would partly be solved. But in a shocking twist, a court recently agreed Pitts’ killer wouldn't spend any more time behind bars. 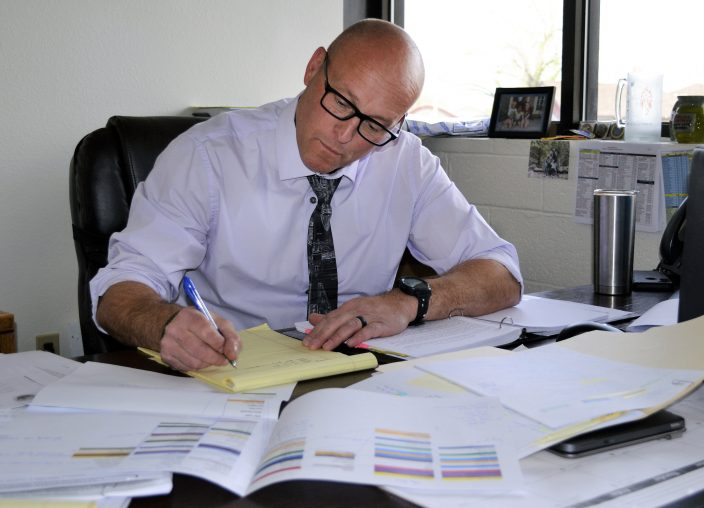 This photo provided by the Yavapai County Sheriff's Office shows Lt. Victor Dartt working from his office in Prescott, Ariz., on April 21, 2021. Dartt led the investigation into the 1988 death of Pamela Pitts, whose then-roommate, Shelly Harmon, confessed to the killing in March 2021 after already having served time for the 1991 death of an ex-boyfriend. (Yavapai County Sheriff's Office via AP)

Over the years, investigators couldn't pin down the evidence they needed to arrest anyone. The tips that poured in didn't add up. The slaying had stoked widespread fear about a killer on the loose around Prescott, a tourist town about 100 miles (160 kilometers) north of Phoenix.

And then the case went cold.

Yet, suspicion followed Pitts' roommate, Shelly Harmon, for the 20 years she spent in prison for fatally shooting her ex-boyfriend, Raymond F. Clerx. As her sentence was ending, police reopened the Pitts case and started monitoring Harmon's phone calls, eventually collecting 20 hours' worth of recordings, according to court documents obtained by The Associated Press. 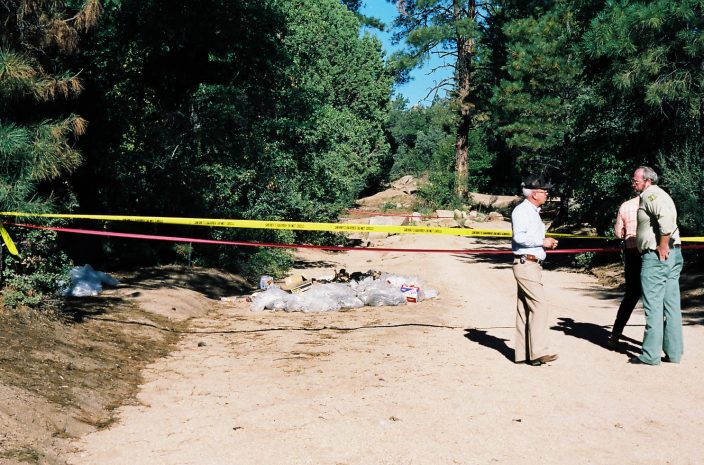 One call gave prosecutors what they said they needed to connect Harmon to Pitts' killing. In it, Harmon's father said she never told him what actually happened.

“I had a moment. I had a huge moment,” Harmon replied.

Dennis McGrane of the Yavapai County Attorney's Office saw it as an admission of guilt. 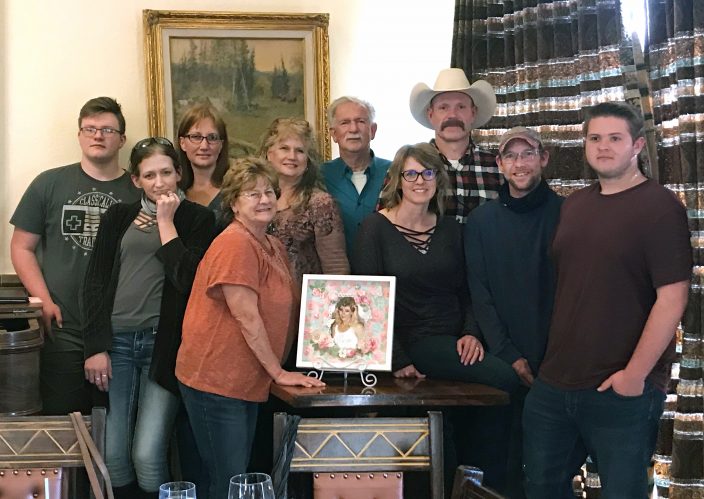 “Like a sudden quarrel with the roommate," he said. “She wasn't planning it, but she did do it.”

Clerx had wanted to end the relationship and was going to take their dogs. In a burst of anger, Harmon shot him as he lay on the roof of a car watching planes overhead. She stored his body in the trunk of her car for two weeks before the smell became overpowering and she dropped it in a mineshaft. 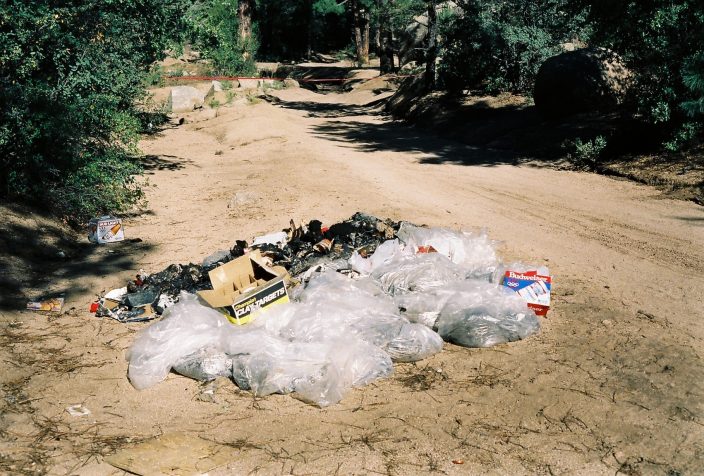 This undated photo provided by the Yavapai County Sheriff's Office shows the site outside Prescott, Arizona, where Pamela Pitts' body was found in 1988 among a pile of trash. Pitts' then-roommate, Shelly Harmon, recently confessed to killing her and was sentenced to time she already had served in another killing. (Yavapai County Sheriff's Office via AP)

Before confessing, Harmon said, “I loved him. I was planning to spend the rest of my life with this man.”

With Pitts' death, Harmon's story changed over the years: She said Clerx was her alibi. She said she was never at the party spot outside town where Pitts went missing on Sept. 16, 1988. She claimed another roommate strangled Pitts. At one point, Harmon declared, “I never killed my roommate. I never wanted to kill anyone. I loved her dearly.”

Prosecutors tried to draw similarities between the two cases to back up a theory that when Harmon felt threatened or abandoned, she killed. 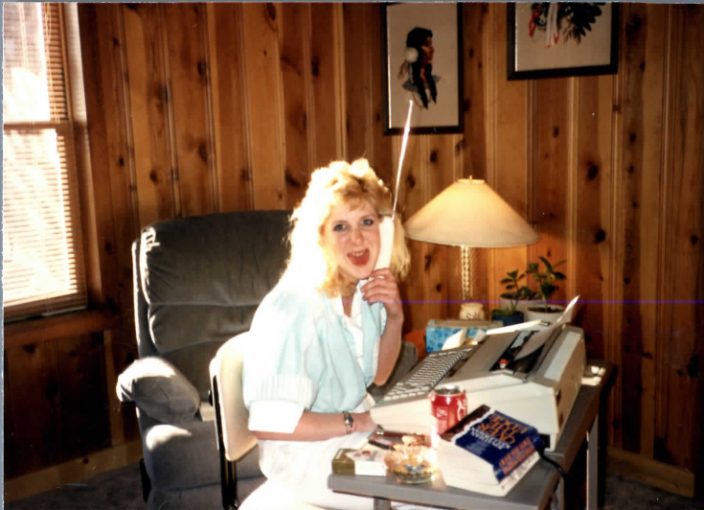 This undated photo provided by the Pitts family shows Pamela Pitts at the Pitts family home outside Prescott, Ariz. Pitts' then-roommate, Shelly Harmon, recently confessed to killing Pitts in 1988 and was sentenced to time she already had served in another killing. (Pitts family via AP)

Cates called that a stretch and argued prosecutors may have well said, “They were both human, they both breathed air."

What prosecutors did have is that Harmon was furious with Pitts over money, for wanting to move out and for sharing news of Harmon's pregnancy that she wanted to keep from her father, according to court documents.

The same day Pitts went missing, Harmon drove around Prescott looking for her and saying she'd kill her if she found her, the documents say. Harmon also said she knew how to conceal a killing: by burning a body or dumping it down a mineshaft — a statement a judge said could be included at a trial that was supposed to start in mid-March. 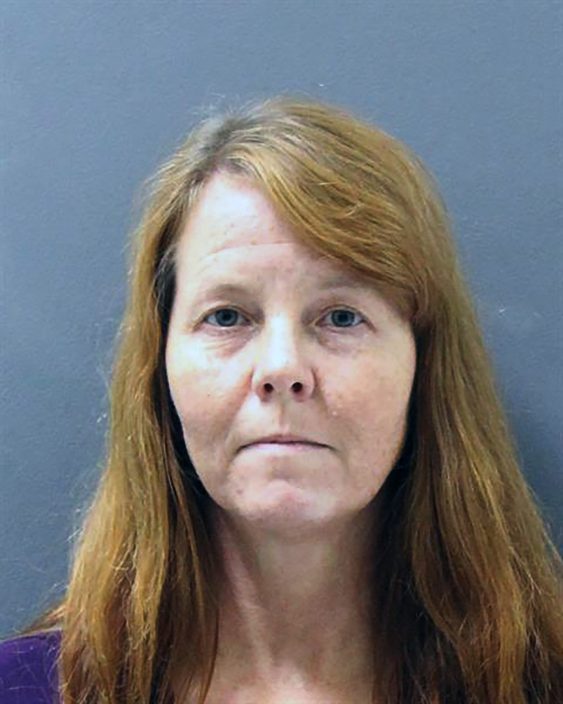 But prosecutors were dealt a huge blow when the court ruled no evidence of Clerx's death could be introduced. The risk of unfair prejudice was too great, the court said.

Plus, the autopsy was inconclusive because of the extent of Pitts' burns. The court ruled that no one could suggest it was a homicide or probable homicide, though that was listed on the report. Pitts was identified through dental records.

Prosecutors acknowledged that they faced a trial without the evidence they had hoped to present. Some witnesses also had died or their memories faded, and the records were incomplete. That's when they considered a plea deal.

“It weighed heavily on us, guaranteeing an outcome versus taking a chance at trial," McGrane said.

Harmon maintained the evidence was stronger against someone else. A former lead detective on the case recommended charges against another woman in 1990 and would have been the defense's star witness, Cates wrote in court documents.

He accused prosecutors of intentionally delaying the case, not taking it to a grand jury until a month after the former detective died in 2017. Harmon was charged with a first-degree murder.

Yavapai County sheriff's Lt. Victor Dartt, who got the case as a new detective in 2011, said he followed leads until they no longer checked out.

“Shelly was the only one that I could keep corroborating,” he said.

Harmon was living outside Carson City, Nevada, after being released from prison for Clerx's death. She got married, managed rental properties, and did bookkeeping and tax work. Neighbors and friends called her a brilliant and generous Christian woman, entrusting her to care for them, their pets and their homes.

Harmon had not registered as a felon as required in Nevada, so she was picked up on that allegation and told of the murder charge once she got to a sheriff's office, Dartt said.

In March, she agreed to plead guilty to second-degree murder and detail how she killed Pitts. Until then, authorities thought someone else may have witnessed the killing and had not come forward.

Harmon said she was alone. In court, Harmon recounted that she was upset Pitts was late on rent and had overdrawn a joint bank account. So, she went looking for her, the two fought and Harmon said, “I just lost it.”

She said she hit Pitts repeatedly against the ground until she was no longer moving, no longer breathing. As voices drew near, Harmon said, she "freaked out.

The Pitts' family found the account unbelievable, ridiculous and weak, like half a story. Harmon did not talk about how Pitts' body was burned.

“It was just to get out of jail," said Pitts' brother, Paul Pitts Jr. “She got a golden ticket, and she got away with murder.”

Harmon was sentenced to 20 years but received credit for the time she served for Clerx's death and the years she spent in jail awaiting trial in Pitts' slaying.

Still, the Pitts family celebrated — it wasn't justice, but it was an ending to the decadeslong case. They remembered Pitts, who exuded 1980s rock style and whose room always smelled like Aqua Net hair spray. She loved animals, took care of the elderly, was kind and bubbly but also had a tough, know-it-all side, her family said.

Her remains were cremated, and her family spread the ashes by Thumb Butte, a geographical landmark in Prescott, where she liked to hike and visit a creek.

Her father bought dinner and drinks at a restaurant after the March 1 court hearing. The family crowded around a framed picture of Pitts and smiled, thankful for the work law enforcement put into the case.

Pitts' mother, Carol, said Harmon will have to live with killing her daughter for the rest of her “miserable life.”

None of Harmon's family or friends were at her final court hearing, according to court documents.

She's barred by the plea agreement from talking about the case. And her usually chatty attorney, Cates, would only say, “This is a very sad case all the way around, and it just needed to end.”

Harmon, now 50, is back in Nevada, friends say. Mary Burgoon said she's had a few meals with Harmon and her husband. She said Harmon was unjustly jailed and believes Harmon pleaded guilty only to avoid prison time.

“Wouldn't you if that was the only way you could get out of there?” said Burgoon, a past president of the Carson City Republican Women's Club. “I do not believe that she did it.”