Among the moneyed du Ponts, who preferred the privacy of their elegant homes and the offices and plants of the chemical company that bore their name, Pierre S. “Pete” du Pont IV was a bit of a rebel.

Du Pont, who died Saturday at age 86 after a long illness, according to his former chief of staff, broke with family tradition by leaving the family business for a career in law and politics.

That led du Pont to multiple elected offices and an unsuccessful bid in the 1987-88 Republican presidential primary race. 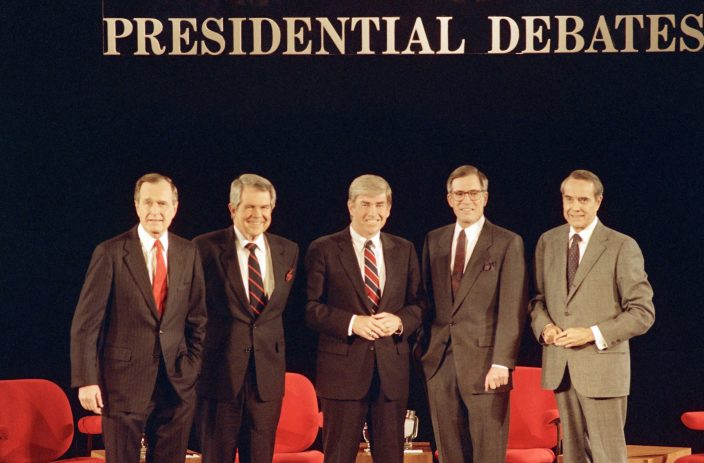 The du Ponts, big-money establishment industrialists, were among the nation’s wealthiest families. That wasn’t a problem for du Pont when he ran for statewide office in Delaware.

After one term in the Delaware state House and three terms in Congress, du Pont was elected governor in 1976 and set about working to restore the state’s financial stability.

However, his elite background turned out to be a problem for him in his race for national office.

“I was born with a well-known name and genuine opportunity. I hope I have lived up to both,” du Pont said in announcing his longshot presidential bid in September 1986. As a little-known governor of a small state, du Pont had to distinguish himself from the rest of the Republican field - including Vice President George Bush and Sen. Bob Dole.

He did that by questioning sacrosanct social programs that his better-known rivals feared to address, such as doing away with farm subsidiaries.

Some of his positions were more conservative than those taken by then-President Ronald Reagan, including mandatory drug testing of high school students.

Du Pont insisted his was a candidacy of ideas, and he offered no apologies, even after Bush dismissed as “nutty” du Pont’s idea to create another form of Social Security modeled on private IRA accounts. The idea later became a mainstream Republican proposal. So did another one, school choice.

“Before you run for president, you ought to decide why you want to be president and what you do if you get there,” du Pont once said. “The only thing that would be worth being in that job is to try to change the things that need to be changed.”

But du Pont’s February 1988 withdrawal became inevitable after his poor showings in the Iowa caucuses and the New Hampshire primary.

During an appearance at the Hotel du Pont in downtown Wilmington, where du Pont announced he was abandoning his campaign for president, he praised an electoral process that gave a shot at the White House to a former small-state governor with unorthodox ideas.

“You’ve given me the opportunity of a lifetime. You listened, you considered and you chose. I could not have asked for any more,” du Pont said. “For in America, we do not promise that everyone wins, only that everyone gets a chance to try.”

Pierre du Pont IV was born Jan. 22, 1935, in Delaware. After attending Phillips Exeter Academy in New Hampshire, he graduated from Princeton University in 1956 with an engineering degree. Following a four-year stint in the Navy, he obtained a law degree from Harvard University in 1963.

He joined the Du Pont Company, where he held several positions, resigning as a quality control supervisor in 1968 to begin his political career.

He left a firm imprint on the government of his native state.

After running unopposed for a state House seat in 1968, du Pont immediately set his sights on Congress, running as a fiscal conservative and winning the first of three terms in 1970.

As governor, du Pont fought successfully to restore financial integrity to a state he had declared “bankrupt” shortly after his 1977 inauguration. He presided over two income tax cuts; constitutional amendments restricting state spending and requiring three-fifths votes in the legislature to raise taxes; and establishment of an independent revenue forecasting panel.

After a rocky start with Democratic legislators, including an embarrassing override of a 1977 budget veto, du Pont forged successful relationships with lawmakers from both parties to tackle thorny issues including prison overcrowding and corruption and school desegregation. He was re-elected in a landslide in 1980, winning a record 71 percent of the vote and becoming the first two-term governor in Delaware in 20 years.

In his second term, du Pont signed landmark legislation that loosened Delaware’s banking laws, including removing the cap on interest rates that banks could charge customers. The Financial Center Development Act made Delaware a haven for some of the country’s largest credit card issuers.

Under du Pont’s leadership, Delaware also established a nonprofit employment counseling and job placement program for Delaware high school seniors not bound for college. It served as the model for a national program adopted by several other states.

Du Pont is survived by his wife of over 60 years, the former Elise R. Wood; a daughter and three sons; and 10 grandchildren.

Due to the coronavirus pandemic, a memorial service will be held at a later date, according to Bob Perkins, his former chief of staff.

Simpson out, St. Pierre in on a stunning day at trials