Kevin Harvick crossed the finish line at Darlington Raceway a year ago and was struck by the stillness and silence of the empty grandstands.

NASCAR was one of the first major sports to resume competition early in the pandemic, setting its own path in a strange new world of health screenings, temperature checks and empty race tracks.

“I didn't think it was going to be that much different, and then we won the race and it is dead silent out here,” said Harvick, who paused to take in the eerie silence that day. “It's weird. There's nobody up there.” 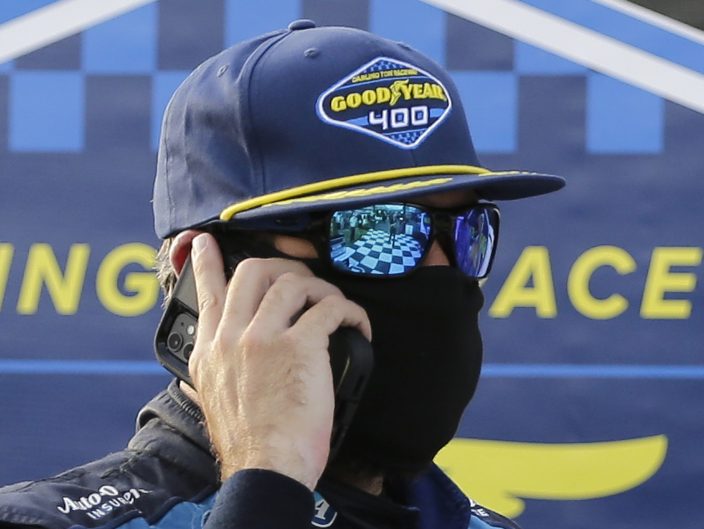 It has taken almost a full year but NASCAR's slow walk toward normalcy is ready to hit another gear: Daytona International Speedway, Darlington Raceway, Kansas Speedway and Pocono Raceway all announced last week their grandstands will open to full capacity later this year. Atlanta Motor Speedway plans the same for July.

NASCAR re-opened its infield to sponsors, guests and media at Darlington last weekend as a trial run. The garage and infield have been closed to nearly everyone since March 8, 2020, and NASCAR President Steve Phelps had said it would remain that way until a vaccine was widely available.

Vaccines have been available since early April to almost everyone in North Carolina, where most NASCAR teams are based, and it allowed NASCAR to put a plan in place for a reopening. There is no vaccine requirement for competitors, but NASCAR permitted teams, drivers and manufacturers to admit a total of 350 fully vaccinated guests and sponsors Sunday at Darlington.

“It’s so important for us. Some of the key players and our sponsors have such interest in it, and they love being here and being a part of it,” said Joe Gibbs, team owner for the winning car driven by Martin Truex Jr. Gibbs included Bass Pro Shops CEO Johnny Morris among his guests.

“We had guys flying in from all over,” Gibbs said. "It’s very, very important to get those key people from the companies back into our sport, and I’m looking forward to getting to go again and do hospitalities.”

The infield will be closed this weekend at Dover, but the footprint is expected to expand to 550 sponsors and guests at Circuit of the Americas in Texas and the Coca-Cola 600 at Charlotte Motor Speedway later this month. Those two races will help set access protocols moving forward.

A year ago, NASCAR restarted its engines 71 days after the series shut down and it was the first major sport to complete its entire season last November. It did so by never changing its procedures during the pandemic.

NASCAR does not test for COVID-19 and the temperature check and health screenings that have been used since the sport restarted have not changed. The motorhome lot has been largely off limits to families, which created some grumbling as some drivers noted it was absurd to enforce banishment during races for those spending time together away from the track.

Motorsports are unlike any other sport in that the hallmark of the industry is the behind-the-rope experience offered to sponsors, fans and even the families of the competitors:

- A driver can bring his children to the pre-race meeting, the post-race news conference and can stand at his car with his entire family all the way up until its time to start his engine.

- The sponsor is given access to the team, can sit on the pit stand during the race, or mingle in a hospitality suite with clients and customers during a meet-and-greet with a driver and team owner.

- Fans can purchase passes into the garage and watch cars roll through inspection, walk down pit road and position themselves to chase their favorite driver for a selfie or an autograph. Infield camping spots are sometimes visited by drivers cruising by on a cart.

IndyCar has had two industry-wide mass vaccinations, will host 135,000 fans on May 30 at the Indianapolis 500 and has been operating as business as usual since the season opened last month. But some of NASCAR's drivers have expressed vaccine hesitancy, and Phelps called mandating the shot “a bit of a slippery slope" so re-opening the garage has taken time.

It has also come with some confusion about the current rules for garage decorum, particularly as mask mandates are being lifted in various states. The Darlington weekend marked the first time Fox pit reporters Jamie Little and Regan Smith did not wear masks while on camera; some drivers took their masks off.

NASCAR clarified Monday that masks are still mandated in the garage for everyone except drivers, who are socially-distanced when they are being interviewed on camera.

Truex noted his brother-in-law works on Sheldon Creed's winning truck and couldn't be part of the photographs Friday night: “He’s like ‘They wouldn’t let us in victory lane and I don’t understand because we were all wearing masks and when we get done here in victory lane we’re all going to get in the van together and drive home,’” Truex said.

It was the same for Truex as he celebrated his third win of the season, pretty much without his crew.

“I think it’s time to get back to doing things like we always did, and I think it’s slowly going that direction,” he said. “I can’t wait until it’s back to the way it used to be.”