Jason Robertson scored 4:30 into overtime, and the Dallas Stars rallied to beat the Chicago Blackhawks 5-4 on Monday night in the final game of the season for each team.

Miro Heiskanen had a goal and an assist for Dallas (23-19-14), which had dropped six of seven. Joe Pavelski, Jason Dickinson and Joel Kiviranta also scored, and Jake Oettinger made 19 saves.

The Stars controlled play for most of the night, finishing with a 50-23 advantage in shots on goal. But they trailed 4-2 before Kiviranta and Dickinson scored 1:54 apart midway through the third. 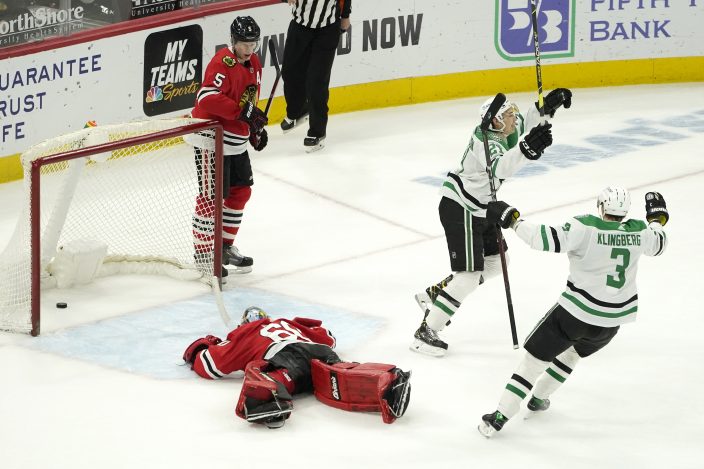 Radek Faksa received a double minor for high-sticking late in regulation, but Dallas killed off the penalty. Jamie Benn then had a shot that trickled past Blackhawks goaltender Collin Delia, and Robertson knocked it home for his 17th on the year.

Delia made 45 stops and Alex DeBrincat extended his goal-scoring streak to seven in a row, but Chicago (24-26-6) finished the season with seven losses in its last nine games. DeBrincat, Dylan Strome, Pius Suter and Vinnie Hinostroza each had a goal and an assist

DeBrincat and Suter helped Chicago get off to a fast start in just its second game of the season with a crowd at the United Center. 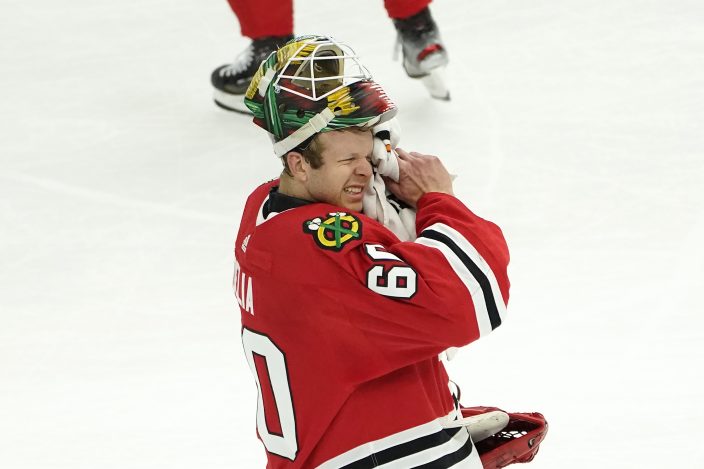 Chicago Blackhawks goaltender Collin Delia wipes his face during a break in the action in the second period of an NHL hockey game against the Dallas Stars Monday, May 10, 2021, in Chicago. (AP PhotoCharles Rex Arbogast)

DeBrincat jumped on a Dallas turnover, skated in alone on Oettinger and converted a backhand 53 seconds into the game. Suter then got a slick pass from DeBrincat and sent a wrist shot from the right circle past Oettinger on the glove side at 1:22.

The 23-year-old DeBrincat finished with a team-high 32 goals. He had nine goals and two assists during his season-ending scoring streak.

Dallas got one back when a wide-open Pavelski slammed home his team-best 25th from right in front with 4:30 left in the first. 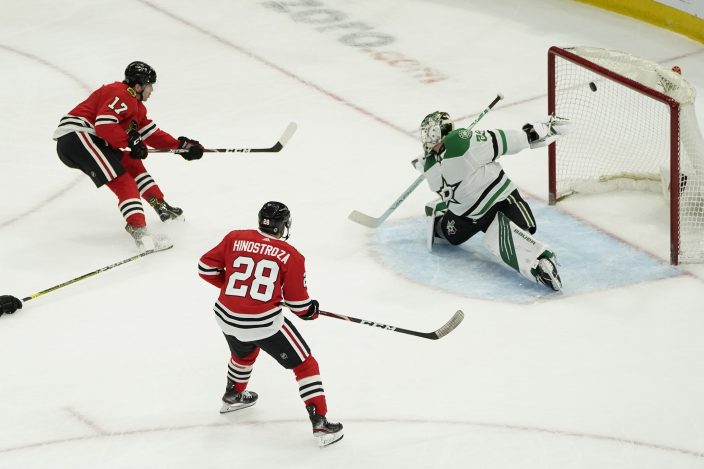 Heiskanen rung a shot off the post in the post in the second, and the Blackhawks rushed down to the other end for a 2-on-0 break. Strome got a pass from Hinostroza and beat Oettinger for a 3-1 lead with 3:32 left.

It was Strome's first goal since April 10 and No. 9 on the year. He was a healthy scratch for four of the previous nine games.

Forwards Patrick Kane, Dominik Kubalik and David Kampf played in every game for the Blackhawks. Pavelski and defensemen Jamie Oleksiak and Esa Lindell accomplished the feat for the Stars.

The Blackhawks recognized their COVID-19 testing staff during a first-period timeout. The crowd cheered when they showed the workers on the overhead videoboard.