Luke Weaver pitched scoreless ball into the seventh inning for his best outing in nearly a month, which helped the Arizona Diamondbacks snap a six-game losing streak with a 5-2 win over the Miami Marlins on Monday night.

Weaver (2-3) cruised though 6 1/3 innings, giving up four hits, striking out six and dominating a team that beat him a week ago in Miami.

The excellent performance might have saved his spot in the rotation. The 27-year-old has struggled for most of the past two seasons and had a 6.07 ERA over six starts this year coming into Monday's game. 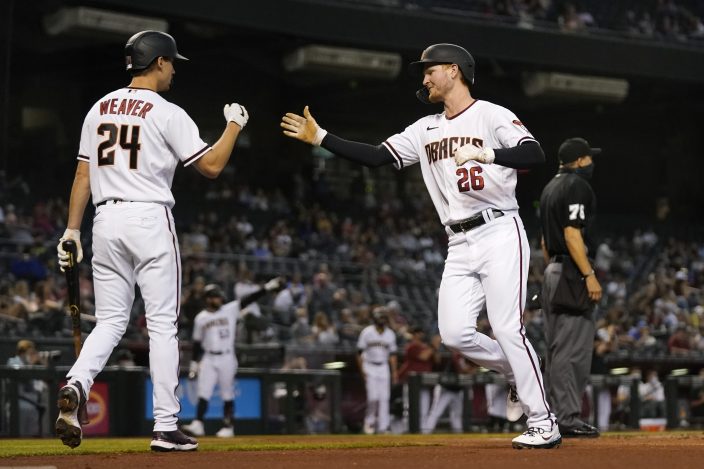 Arizona Diamondbacks' Pavin Smith (26) and Luke Weaver (24) celebrate their runs scored against the Miami Marlins during the third inning of a baseball game Monday, May 10, 2021, in Phoenix. (AP PhotoRoss D. Franklin)

One of Weaver's biggest problems has been high pitch counts, which meant early exits and extra work for the bullpen. But he made quick work of the Marlins through six innings, needing just 65 pitches — 51 for strikes. He was pulled in the seventh after striking out Corey Dickerson. Taylor Clarke got the final two outs of the inning.

It was a much-needed win for the Diamondbacks, who had plunged in the standings after a terrible six-game road trip that included three-game sweeps by the Marlins and Mets. The offense scored just 12 runs the entire week.

Arizona's bats were a little better on Monday. David Peralta had a triple and a double, while Asdrubal Cabrera added a two-run double. 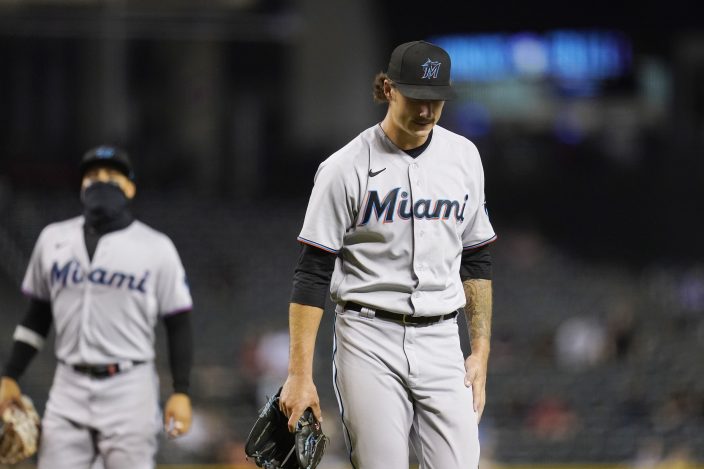 Miami Marlins starting pitcher Jordan Holloway, right, walks off the field as he is replaced while Marlins second baseman Isan Diaz, left, looks on during the fourth inning of a baseball game against the Arizona Diamondbacks, Monday, May 10, 2021, in Phoenix. (AP PhotoRoss D. Franklin)

The Marlins scored their only runs in the eighth when Jesús Aguilar smacked a two-run homer off Joakim Soria into the left-center seats. It was his seventh long ball of the season.

Stefan Crichton threw a scoreless ninth for his fourth save. Right fielder Pavin Smith stole a solo homer from pinch-hitter Sandy Leon for the final out, jumping at the fence and snagging the ball just before it went over.

Jordan Holloway (1-1) took the loss in his first career start, giving up four runs over 3 2/3 innings. 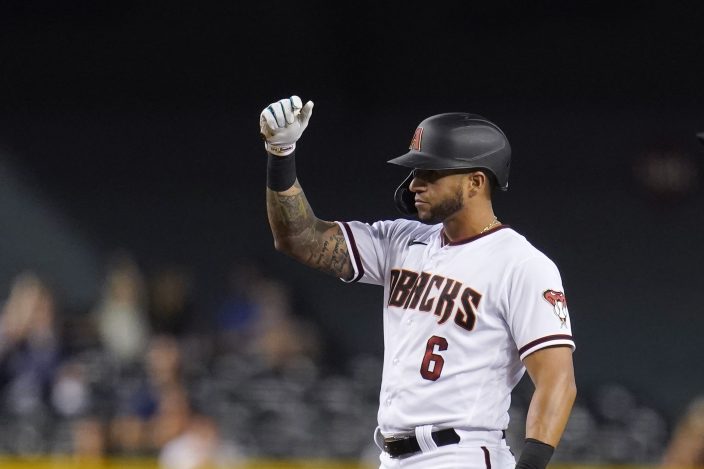 Arizona Diamondbacks' David Peralta celebrates his double against the Miami Marlins during the fifth inning of a baseball game Monday, May 10, 2021, in Phoenix. (AP PhotoRoss D. Franklin)

The 24-year-old Holloway had been impressive in his first six big league appearances out of the bullpen, giving up six hits over 10 1/3 scoreless innings. But the Diamondbacks jumped on the right-hander quickly, with Smith and Carson Kelly starting the offense with back-to-back doubles to open the bottom of the first.

Arizona managed just one run in the first despite loading the bases with no outs. The Diamondbacks pushed ahead 4-0 in the third when the first four batters reached base. Cabrera's double down the right-field line brought home two runs.

Christian Walker put the Diamondbacks ahead 5-0 in the fifth with a two-out double. 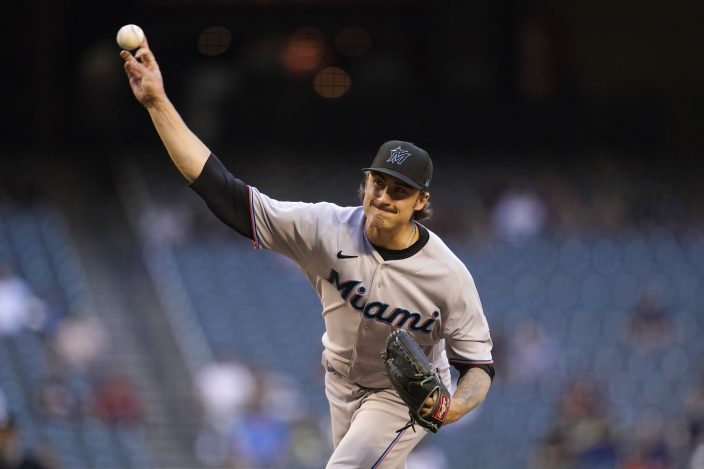 Miami Marlins starting pitcher Jordan Holloway throws a pitch against the Arizona Diamondbacks during the first inning of a baseball game Monday, May 10, 2021, in Phoenix. (AP PhotoRoss D. Franklin)

The Marlins had one of their few offensive opportunities snuffed out in the sixth when Magneuris Sierra was picked off first base following his leadoff single.

The play was close and Walker might have missed the tag, but there was a problem: Marlins manager Don Mattingly didn't have another challenge because his appeal failed in the fifth. 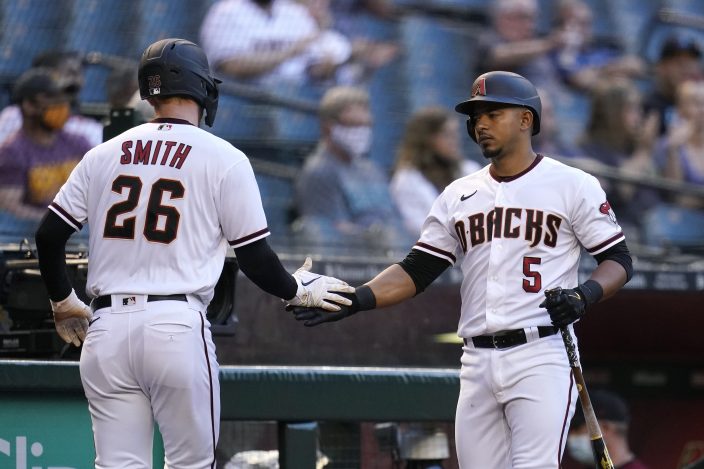 Arizona Diamondbacks' Pavin Smith (26) celebrates his run scored against the Miami Marlins with teammate Eduardo Escobar (5) during the first inning of a baseball game Monday, May 10, 2021, in Phoenix. (AP PhotoRoss D. Franklin)

Sierra stood on first base for a minute, looking over at Mattingly, who was leaning against the rail. Finally, the manager flipped his palms up as if asking “What do you want me to do?”

Sierra finally realized he was out of luck and trudged back to the bench.

Diamondbacks: Manager Torey Lovullo said OF Ketel Marte (hamstring) will be at Chase Field on Tuesday and go through some drills so the team can see his progress, especially when it comes to running. ... RHP Taylor Widener (strained groin) threw a bullpen and Lovullo said the session went well.

The Diamondbacks send out LHP Madison Bumgarner (3-2, 4.91 ERA) to face Marlins RHP Pablo López (0-2, 2.04). Bumgarner has been excellent over his past four starts, giving up just three earned runs in 23 innings.

Germany is opening a museum explor ...

Everyone who’s played it, from the ...