Mauricio Dubon broke a seventh-inning tie with a two-out, pinch-hit single, Alex Wood won for the fourth time in five starts and the San Francisco Giants beat the Texas Rangers 3-1 on Monday night.

Brandon Belt hit his eighth home run and Mike Yastrzemski doubled for San Francisco. The Giants (21-14) are tied with idle St. Louis for the best record in the National League. 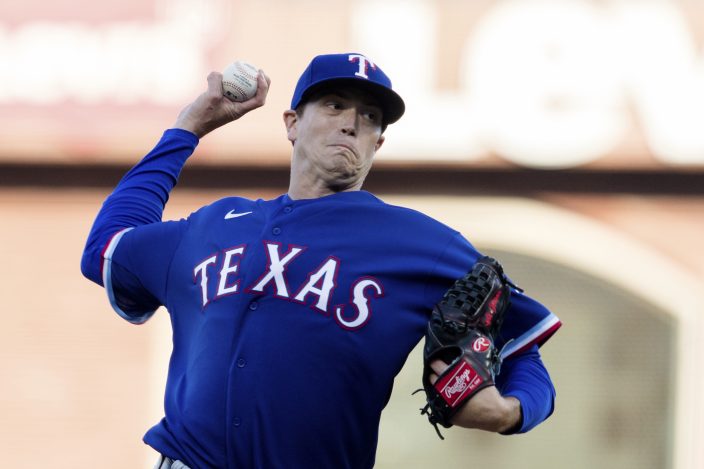 Wood (4-0) had seven strikeouts and allowed one run in seven innings, lowering his ERA to 1.80. The lefty got double plays in the fifth and seventh innings and fanned Adolis Garcia and Joey Gallo with two on and one out in the sixth.

Tyler Rogers retired three batters. Jake McGee allowed two hits in the ninth but got Charlie Culberson to pop out to third to end it. 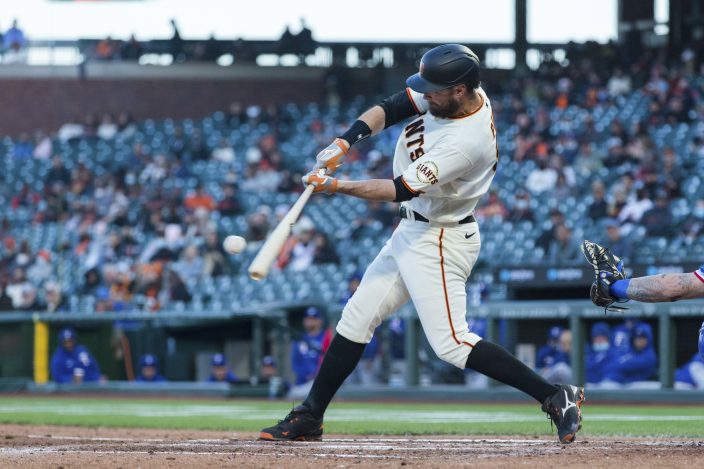 San Francisco Giants' Brandon Belt hits a solo home run against the Texas Rangers during the fourth inning of a baseball game in San Francisco, Monday, May 10, 2021. (AP PhotoJohn Hefti)

Khris Davis had two hits for the Rangers.

The Giants took the lead for when Kapler turned to his bench in the seventh.

Pinch-hitters Austin Slater and Darin Ruf walked and singled respectively off reliever John King (4-2). Dubon, hitting for Wood, followed with a single to left, and Slater slid into home well ahead of the throw from Davis. Culberson’s throwing error on Yastrzemski’s grounder allowed Ruf to score. 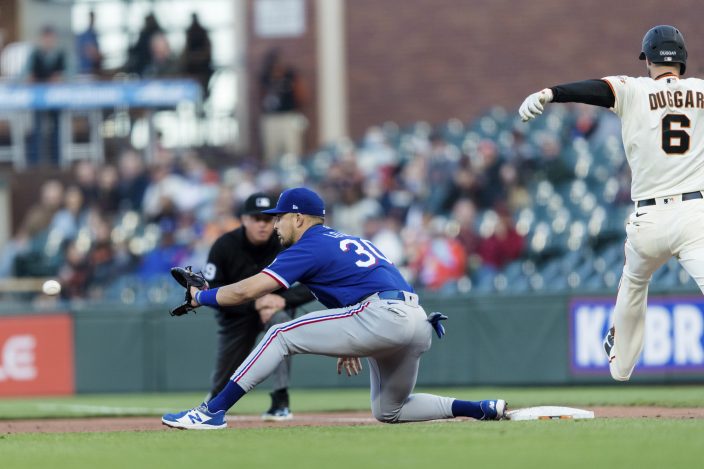 Texas Rangers first baseman Nate Lowe (30) makes the catch for an out against San Francisco Giants' Steven Duggar (6) during the third inning of a baseball game in San Francisco, Monday, May 10, 2021. (AP PhotoJohn Hefti)

“It’s tough when you’re going to roll out three pinch-hitters all at once,” Kapler said. “If you don’t end up scoring a run, you’re almost out of players. Dubon’s at-bat was excellent, that’s the one that’s going to stand out. But Slater’s was equally as good and Ruf’s was awesome.”

Rangers manager Chris Woodward was aware that Kapler was sitting on a bevy of right-handed hitters in the dugout but brought in the lefty King to pitch.

“The first two batters, punch out, punch out,” Woodward said. “Falling behind Ruf was kind of the biggest point of the inning. Dubon’s at-bat was a good at-bat by the kid. (King) just didn’t make a pitch there at the end.” 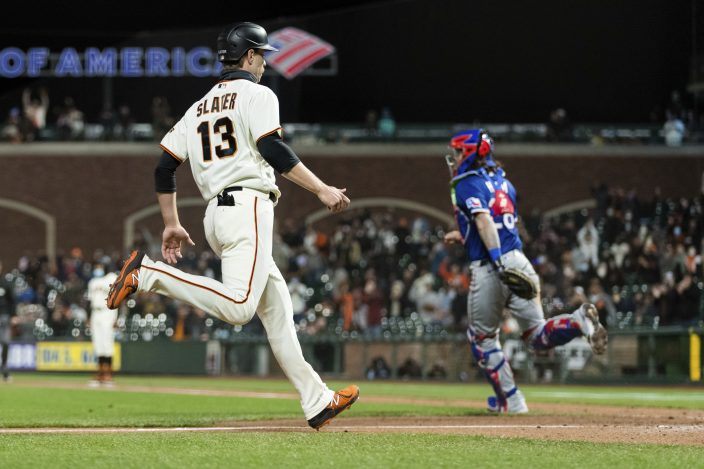 San Francisco Giants' Austin Slater (13) scores a run against the Texas Rangers during the seventh inning of a baseball game in San Francisco, Monday, May 10, 2021. (AP PhotoJohn Hefti)

Belt hit an opposite-field home run to left-center off starter Kyle Gibson in the fourth.

The Rangers scored their only run when Davis tripled leading off the fifth and scored on Culberson’s RBI single.

Gibson allowed one run and four hits with six strikeouts in six innings. It was Gibson’s seventh consecutive quality start, tying the Rangers franchise record set by Yu Darvish in 2012. 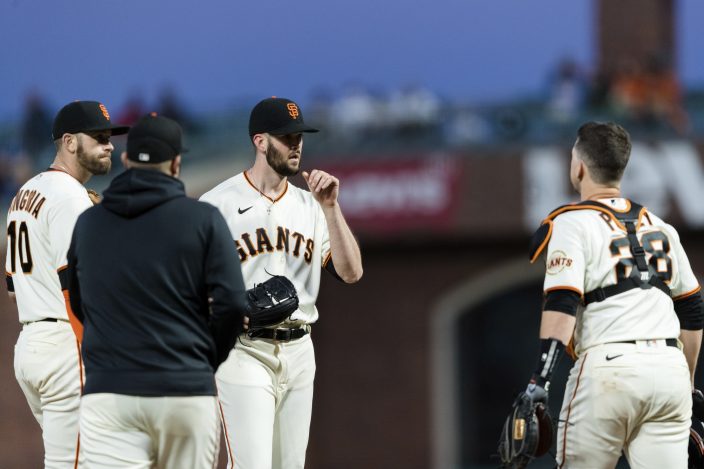 Belt’s home run was the 15th by the Giants in May, tying the Rangers for most in the majors. ... The triple by Davis was his first since July 11, 2018 while still with Oakland. ... Buster Posey walked and went 0 for 3, ending his eight-game hitting streak. ... San Francisco is 13-4 at home.

Rangers catcher Jack Kruger, claimed off waivers from the Los Angeles Angels on Sunday, was optioned to Triple-A Round Rock. He is on the club’s taxi squad for the series against the Giants.

Giants: On Thursday, the Giants will reach their 85% threshold for vaccination, according to Kapler. He expects everyone to be able to lower masks in the dugout, clubhouse and other shared spaces while respecting the distance with those who haven’t been vaccinated. “We’re going to be nearly fully vaccinated as a group,” Kapler said.

Rangers RHP Jordan Lyles (1-2. 7.09 ERA) takes the mound Tuesday and has allowed a home run in a franchise-record 12 consecutive starts dating to last season. RHP Logan Webb (1-3, 5.34) pitches for the Giants and has allowed nine earned runs over his last 9 2/3 innings.