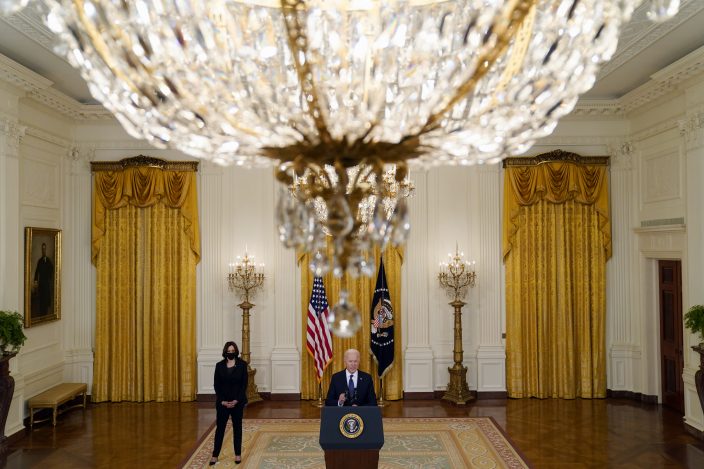 Vice President Kamala Harris, left, listens as President Joe Biden speaks about the economy, in the East Room of the White House, Monday, May 10, 2021, in Washington. (AP PhotoEvan Vucci)

CHINA-TWITTER-FAKE-FANS — A seven-month investigation by The Associated Press and the Oxford Internet Institute finds that China’s rise on Twitter has been powered by an army of fake accounts that have retweeted Chinese diplomats and state media tens of thousands of times. The accounts covertly amplified propaganda that can reach hundreds of millions of people — often without disclosing the fact that the content is government-sponsored. Erika Kinetz. SENT: 3,120 words, photos. An abridged version of 830 words is also available. 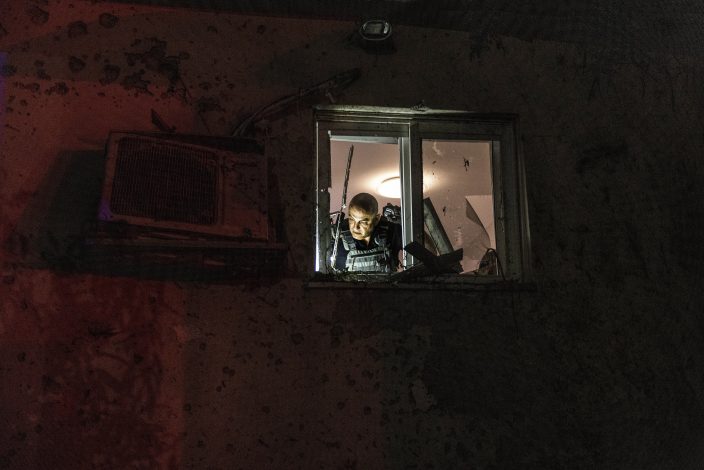 Israeli police inspect damage to a house hit by a rocket fired from the Gaza Strip, at a kibbutz near the Israel-Gaza border, Tuesday, May 11, 2021. (AP PhotoTsafrir Abayov)

ISRAEL-PALESTINIANS — Israel unleashed new airstrikes on Gaza, hitting the high-rise home of a Hamas field commander and two border tunnels dug by militants, as Hamas and other armed groups fired dozens of rockets toward Israel. It was an escalation sparked by weeks of tensions in contested Jerusalem. Since sundown Monday when the cross-border fighting erupted, 24 Palestinians — including nine children — were killed in Gaza, most by airstrikes, Gaza health officials say. The Israeli military said 15 of the dead were militants. During the same period, Gaza militants fired more than 200 rockets toward Israel, injuring six Israeli civilians. By Fares Akram and Karin Laub. SENT: 870 words, photos.

VIRUS-OUTBREAK-INDIA-AID — Volunteers at Hindu temples, Muslim groups and Sikh relief organizations across the United States are mobilizing to support India as the world’s second most populous country struggles to handle a devastating surge of the coronavirus. From coast to coast, faith groups tied to the Indian diaspora have collected hundreds of oxygen concentrators and electrical transformers to ship to overwhelmed hospitals, raised millions for everything from food to firewood for funeral pyres and gathered in prayer for spiritual support for the Asian nation. By Luis Andres Henao and Jessie Wardarski. SENT: 920 words, photos. With VIRUS-OUTBREAK-INDIA-PHOTO-GALLERY — Jumbo Mumbai COVID-19 hospital treats thousands.

VIRUS-OUTBREAK-VACCINE-KIDS — U.S. regulators expanded the use of Pfizer’s COVID-19 vaccine to children as young as 12, offering a way to protect the nation’s adolescents before they head back to school in the fall and paving the way for them to return to more normal activities. By Lauran Neergaard and Candice Choi. SENT: 840 words, photo, video. 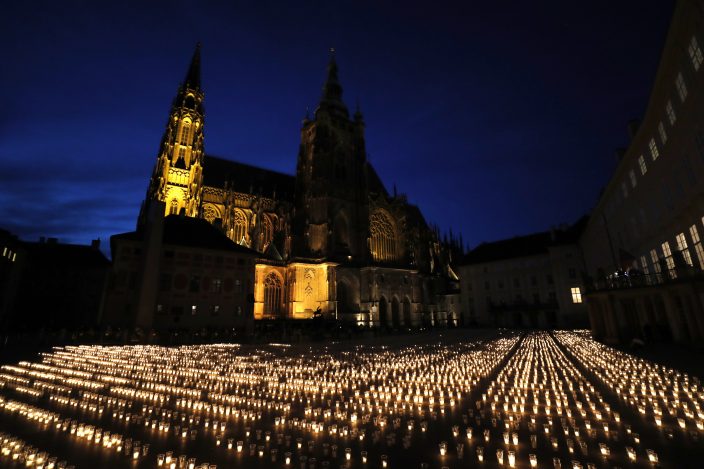 Candles are lit to commemorate victims of the COVD-19 pandemic at the Prague Castle in Prague, Czech Republic, Monday, May 10, 2021. The Czech Republic is massively relaxing its coronavirus restrictions as the hard-hit nation pays respect to nearly 30,000 dead. (AP PhotoPetr David Josek)

MYANMAR-100-DAYS — One hundred days since their takeover, Myanmar’s ruling generals maintain just the pretense of control over the country. It’s an illusion sustained mainly by its partial successes at silencing independent media and keeping streets clear of demonstrators by using lethal force. There are fears the military takeover is turning Myanmar into a failed state. By Grant Peck. SENT: 1,010 words, photos. With MYANMAR-PHOTO GALLERY; THAILAND-MYANMAR-JOURNALISTS — Police in Thailand arrest three journalists who fled Myanmar.

CONGRESS-ELECTIONS BILL — Republicans are preparing to launch an all-out assault on a sweeping voting rights bill from Democrats. They plan to force dozens of politically inconvenient votes during a hearing that will spotlight an increasingly charged national debate over access to the ballot. By Brian Slodysko and Christina A. Cassidy. SENT: 970 words, photos. UPCOMING: 1,100 words after 10 a.m. meeting begins. 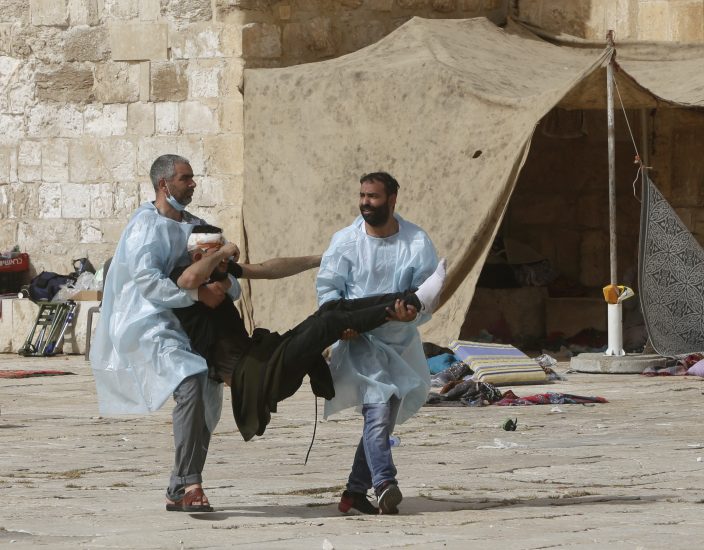 Palestinians evacuate a wounded man during clashes with Israeli security forces at the Al-Aqsa Mosque compound in Jerusalem's Old City Monday, May 10, 2021. Israeli police clashed with Palestinian protesters at the flashpoint Jerusalem holy site on Monday, the latest in a series of confrontations that is pushing the contested city to the brink of eruption. Palestinian medics said at least 180 Palestinians were hurt in the violence at the Al-Aqsa Mosque compound, including 80 who were hospitalized. (AP PhotoMahmoud Illean) 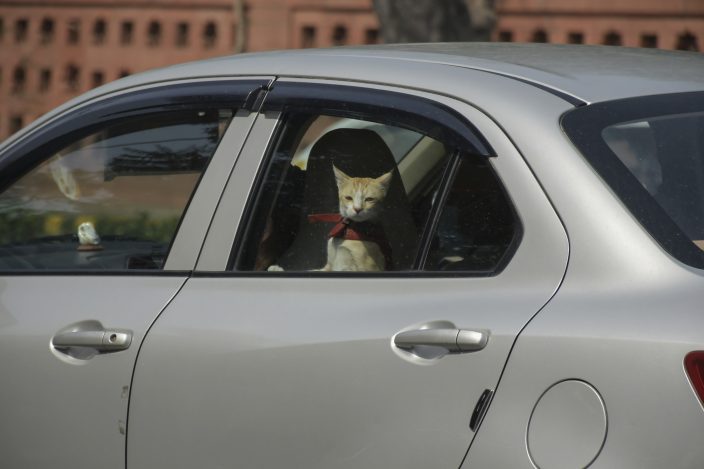 A cat peeps through the window of a car driving past the parliament complex during a lockdown to curb the spread of coronavirus in New Delhi, India, Monday, May 10, 2021. (AP PhotoIshant Chauhan)

VIRUS-OUTBREAK-ARGENTINA-ADAPTING-DOCTORS — Many doctors in Argentina have become experts at intubation during the current outbreak of coronavirus cases that has filled clinics in Buenos Aires and nearby towns with patients. SENT: 680 words, photos. With VIRUS-OUTBREAK-THE-LATEST.

MEXICO-VACCINES — Mexican authorities say that the Russians have been having so many problems producing the second dose of the Sputnik V coronavirus vaccine that Russia probably will be unable to supply enough to people who got the first dose. SENT: 640 words, photo.

VIRUS-OUTBREAK-HONG-KONG — Hong Kong officials drop a plan to mandate foreign domestic workers be vaccinated against the coronavirus, after hearing international criticism the move would be discriminatory. SENT: 240 words, photos.

PIPELINE-CYBERSECURITY ATTACK — The operator of a major U.S. pipeline hit by a cyberattack says it hopes to have service mostly restored by the end of the week. SENT: 1,020 words, photos, video.

DUBAI-YOUNGEST-DJ — A 9-year-old girl who lives in Dubai is scratching her way to the top as a DJ in world competitions. SENT: 630 words, photos.

UNITED-NATIONS-IRAQ-ISLAMIC-STATE — The head of a U.N. team investigating atrocities in Iraq announced it has found “clear and compelling evidence” that Islamic State extremists committed genocide against the Yazidi minority in 2014 and said the militant group successfully developed chemical weapons and used mustard gas. SENT: 930 words, photo.

GEORGIA CHASE-DEADLY SHOOTING — Three Georgia men were scheduled to appear before a federal judge on federal hate crime charges in the slaying of Ahmaud Arbery, a 25-year-old Black man who was chased and shot after being spotted running in the defendants’ neighborhood. SENT: 710 words, photos. UPCOMING: Court hearing at 1:30 p.m.

NORTH-CAROLINA-DEPUTY-SHOOTING — The family of a Black man who was fatally shot by sheriff’s deputies in North Carolina is expected to view more than 18 minutes of body camera video of the incident. SENT: 400 words, photos.

COLORADO-SHOOTING — Residents of a tight-knit trailer park in Colorado Springs tried to make sense of a weekend shooting at a birthday party that killed six people before the gunman, described as a boyfriend of one of the victims, took his own life. SENT: 620 words, photos.

JAPAN-NISSAN-GHOSN — Nissan Chairman Carlos Ghosn told prosecutors during questioning on financial misconduct charges before he fled Japan that his compensation was never decided upon, according to records presented in Tokyo District Court. By Business Writer Yuri Kageyama. SENT: 530 words, photo.