Top-ranked Novak Djokovic shouted at the umpire before regaining his cool to see out his rain-delayed second-round match against Taylor Fritz at the Italian Open on Tuesday.

With conditions worsening during the second set and rain getting heavier, Djokovic’s temper boiled over and he roared, “How much more do you want to play?” at the umpire before adding “I asked you three times and you are not checking anything” as his remonstrations with the chair continued. 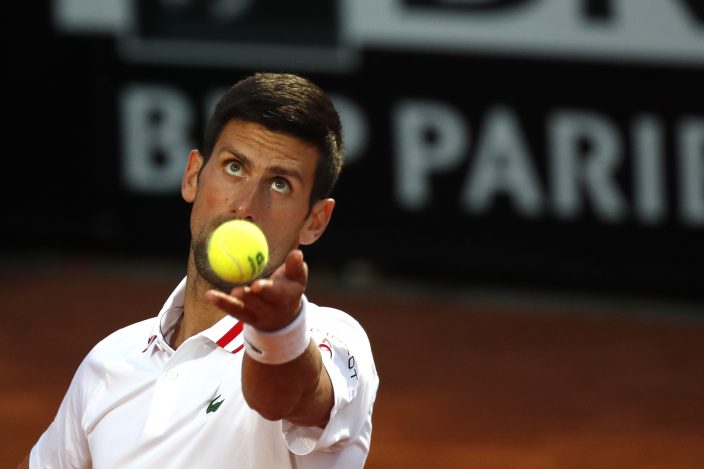 Novak Djokovic of Serbia serves the ball to Taylor Fritz of the United States during their match at the Italian Open tennis tournament, in Rome, Tuesday, May 11, 2021. (AP PhotoAlessandra Tarantino)

“I was stressed out in the end obviously, but I think it was the right call to stop the match,” Djokovic said.

“When I came back, I thought we were quite even actually till the last point. I’m glad that I managed to finish off this match in straight sets. I know I can play better, and I’m going to work tomorrow trying to make sure I do that in two days.”

Djokovic, back in action after sitting out the Masters in Madrid, had taken the opening set 6-3 before moving a break ahead in the second to lead 5-4. 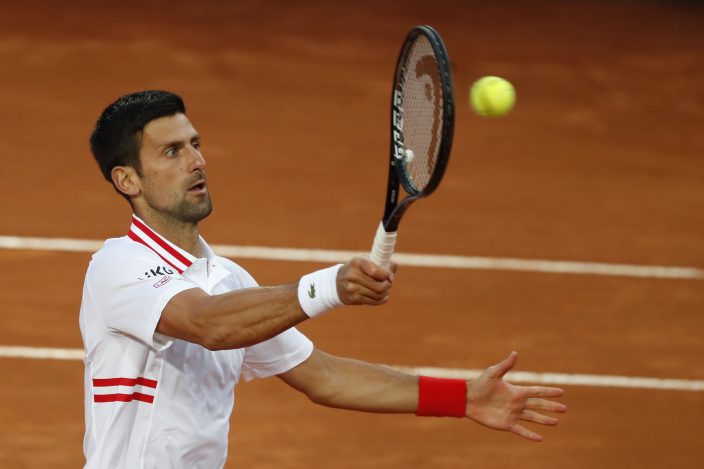 Novak Djokovic of Serbia returns the ball to Taylor Fritz of the United States during their match at the Italian Open tennis tournament, in Rome, Tuesday, May 11, 2021. (AP PhotoAlessandra Tarantino)

However, the Serb failed to serve out for the match and play was then suspended for approximately three hours. Fritz held his service game after the resumption to force the tiebreak, but Djokovic closed out the win on his first match point.

“It was a very strange match with strange conditions,” Djokovic said. "Obviously, playing under the rain nonstop for almost two full sets, it is challenging for both me and him.

“I thought that I had an advantage there because the conditions were slower which allows me to return his serves, because he’s got really big serves," Djokovic continued. "So I kind of kept the match under my control for most part of the two sets, then served for the match. Very sloppy service game. He played well, made a great passing shot to come back." 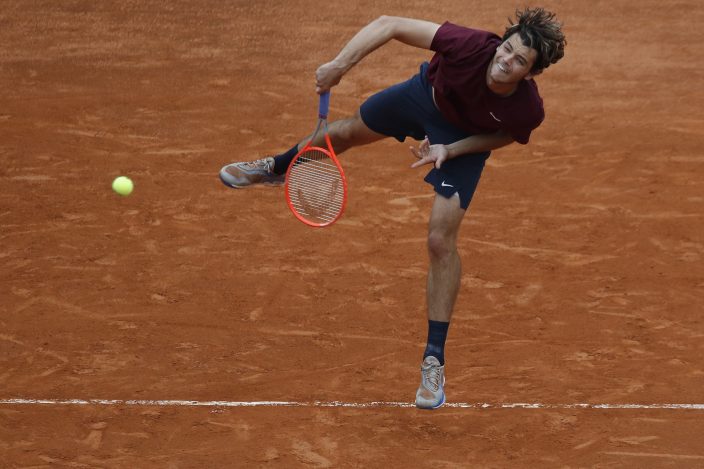 Taylor Fritz of the United States serves the ball to Novak Djokovic of Serbia during their match at the Italian Open tennis tournament, in Rome, Tuesday, May 11, 2021. (AP PhotoAlessandra Tarantino)

Last year, Djokovic was disqualified from the U.S. Open for unintentionally hitting a line judge in the throat with a ball.

Djokovic will next play a qualifier in either Alejandro Davidovich Fokina, who upset 16th seed Grigor Dimitrov 6-4 7-6 (2) in his first-round match on Tuesday, or Cameron Norrie.

All the remaining matches on Tuesday were postponed including Daniil Medvedev’s showdown with fellow Russian Aslan Karatsev.

Earlier, ninth-seeded Matteo Berrettini rallied to beat Nikoloz Basilashvili 4-6, 6-2, 6-4 — less than 48 hours after losing the final in Madrid. Fellow Italian Lorenzo Sonego is also through to the second round after celebrating his birthday by beating 14th-seeded Gael Monfils 6-4 5-7 6-4.

Kei Nishikori was handed a walkover in his second-round match against 11th-seeded Pablo Carreno Busta. Eighth-seeded Diego Schwartzman was beaten 6-1 6-3 by Canadian Felix Auger-Aliassime, who moves into the third round.