Alex the therapy bunny, a floppy-eared golden rabbit that gained social media fame by capturing the hearts of Giants fans at a game last month, is now visiting the Golden State Warriors in hopes of bringing some good fortune.

Alex's owners dressed him in a blue Warriors uniform and button and posed him for photos before Golden State hosted the Phoenix Suns on Tuesday night.

Kei Kato and her fiancé, Josh Row, were determined to bring Alex to Chase Center by season's end — and the Warriors upgraded the couple's seats to the lower bowl and made a special exception so the bunny could attend. 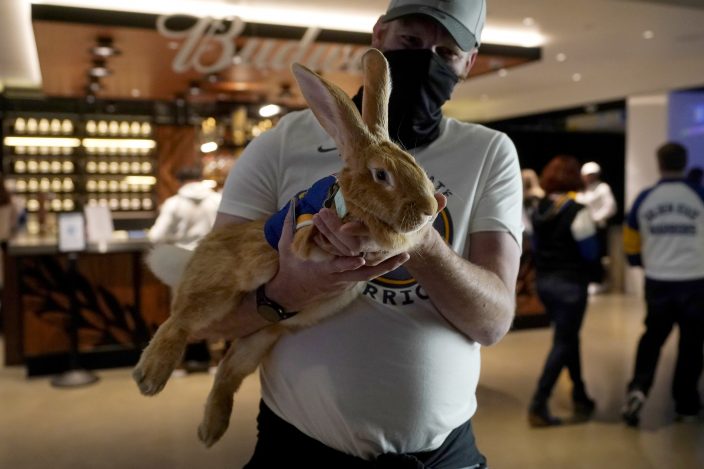 Josh Row holds up a therapy rabbit named Alex at Chase Center before an NBA basketball game between the Golden State Warriors and the Phoenix Suns in San Francisco, Tuesday, May 11, 2021. (AP PhotoJeff Chiu)

“We appreciate it,” said Kato, who has regained some comfort in social settings through Alex’s grand adventures and goodwill. “It does help. With the popularity we are able to reach out more to the community. We got a ton of people saying ‘thank you so much,’ they have PTSD, they’re having a rough day.”

Alex has been a reliable friend to Kato, who lost her brewery restaurant during the pandemic and now runs a small café in a U.S. Immigration office. She also has been working nights at a COVID-19 vaccination site, so the days are stressful. 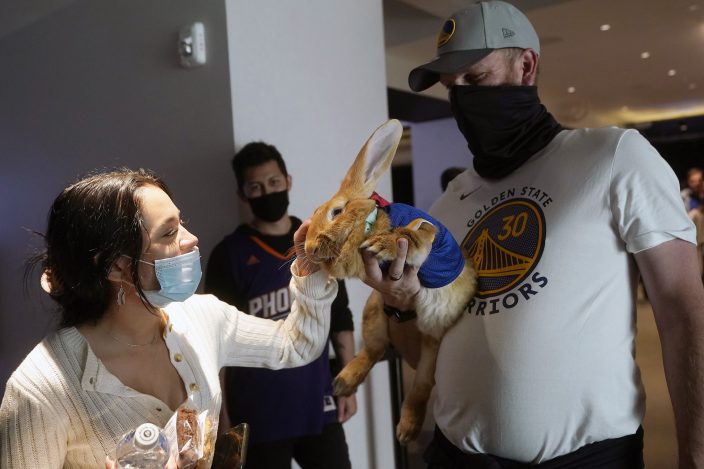 The bunny is a healthy 17 pounds at 5 months old and could top out at 30-40 pounds. He offers snuggles and kisses on command.

Alex keeps spreading joy. He has been hopping into high school Zoom classes and will be fundraising for the House Rabbit Society in the East Bay suburb of Richmond.

“We use this stuff, the popularity, to give back," Kato said. “It brought joy to us, so much joy. So many people are loving him. They're like ‘We love you!’ Every time we walk by they're like, ‘Oh, there’s Alex!' It really made us feel good. There's still good in the community. There's so much hate right now. He really brought us into the community."

Golden State coach Steve Kerr was all for it. He has a new dog himself and knows how much pets can do for people to help lift spirits.

“It doesn't surprise me. I'm a huge believer in the therapeutic benefits of having a pet,” Kerr said. “We got a dog a few months ago. I understand that a lot of people are getting pets, pandemic pets they're called. I just believe in the power of animals, the healing qualities they bring, just the unconditional love. I wasn't aware of that story but I'm all for it.”

There will certainly be more fun ahead for Alex and Co. He received a big screen bunny welcome from the Warriors during a first-quarter timeout.

“Just to give back and make everybody happy makes us happy,” Kato said. “We want to share him with the world.”