Chris Bassitt struck out a season-high 10 over seven effective innings and the Oakland Athletics beat the Boston Red Sox 3-2 on Tuesday night in a matchup of American League division leaders.

Matt Chapman and Elvis Andrus hit RBI singles for the A's in the seventh inning as Oakland broke a 1-all tie with two runs. Matt Olson also had an RBI single for the A's, who opened six-game road trip with a victory.

Yusmeiro Petit pitched a scoreless eighth and Jake Diekman got his fourth save despite walking two batters in the ninth. 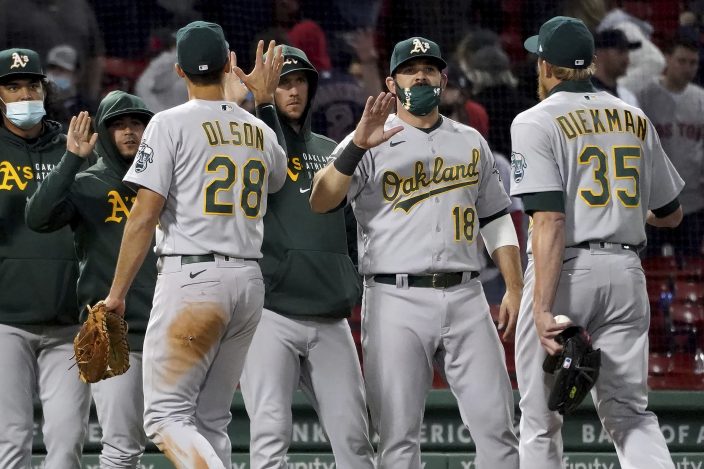 Oakland Athletics, including Mitch Moreland (18), congratulate each other after a 3-2 win over the Boston Red Sox in a baseball game Tuesday, May 11, 2021, in Boston. (AP PhotoMary Schwalm)

Rafael Devers homered for Boston, which has lost two straight since winning four in a row.

Bassitt (3-2), whose previous high for the season was nine strikeouts on April 29 at Tampa Bay, allowed just three hits and two runs. He hurt himself in the first with a pair of wild pitches that helped Boston take a 1-0 lead. But he settled down nicely after J.D. Martinez's sacrifice fly, retiring 14 straight batters before Michael Chavis singled with one out in the sixth.

Boston led 1-0 until the fourth, when Olson singled to drive in Seth Brown. 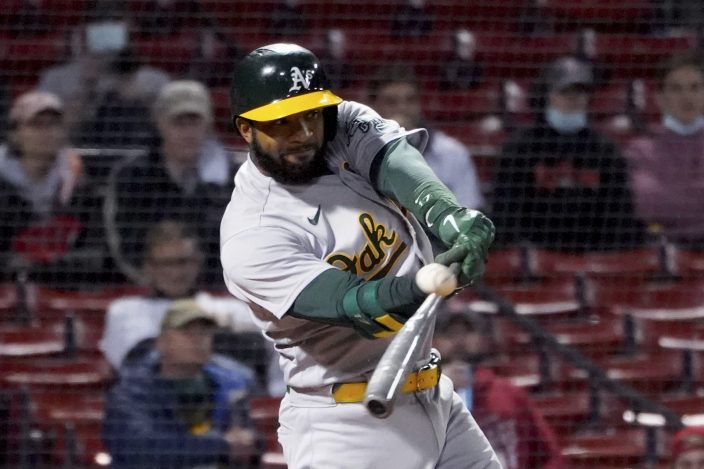 Oakland Athletics' Elvis Andrus hits a single to score Matt Chapman during the seventh inning of the team's baseball game against the Boston Red Sox, Tuesday, May 11, 2021, in Boston. (AP PhotoMary Schwalm)

Red Sox starter Nathan Eovaldi lasted six innings, holding Oakland to one run on two hits and two walks. He struck out four before Darwinzon Hernandez took over in the seventh. After Olson drew a leadoff walk, Jed Lowrie and Chapman followed with back-to-back singles as Oakland took its first lead.

Hernandez (0-2) was replaced by Adam Ottavino with one out and runners at second and third. Boston caught a break when Sean Murphy hit a hard grounder to third and Devers came right home to catcher Christian Vázquez, who had Lowrie in a rundown and tagged him for the second out. Chapman scored on Elvis Andrus’ bloop single for a 3-1 lead.

Devers' homer in the bottom of the seventh, his ninth of the season, pulled Boston back within a run. Fans booed when the umpire crew circled for a replay review, but the cheering resumed when replays showed the ball cleared the Green Monster before a fan touched it. 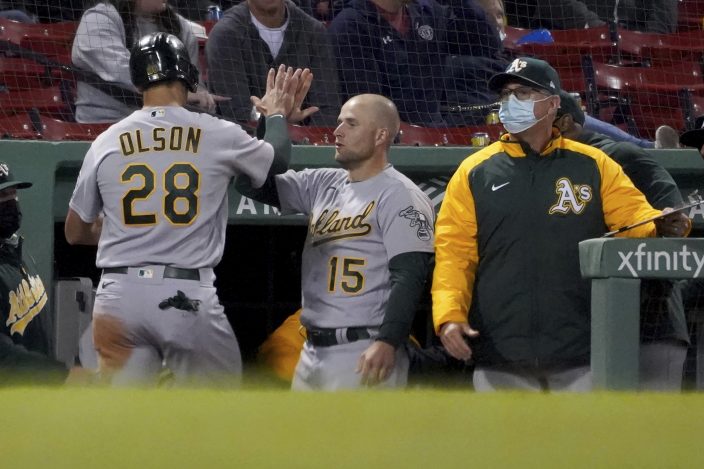 Oakland Athletics' Matt Olson (28) is congratulated at the dugout by Seth Brown (15) after scoring on a hit by Matt Chapman during the seventh inning of a baseball game against the Boston Red Sox, Tuesday, May 11, 2021, in Boston. (AP PhotoMary Schwalm)

Athletics: C Aramís García (viral enteritis) is traveling with the club and could return to the roster this week, manager Bob Melvin said. … OF Chad Pinder (sprained left knee) continued a rehab assignment with Triple-A Las Vegas, where he played shortstop on Monday. Melvin said the A’s can play Pinder in the outfield or infield whenever he’s ready to return. “We’re going to play him in different positions like we always do and then once he gets here, we’ll figure out what we think the best complement is,” Melvin said. 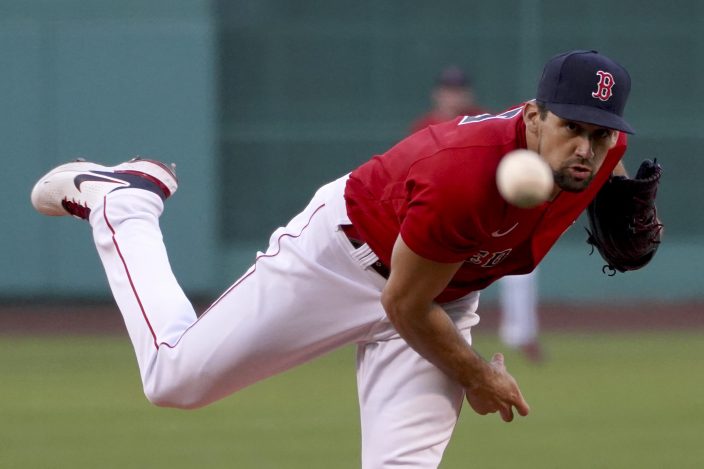 Boston Red Sox starting pitcher Nathan Eovaldi watches a throw to an Oakland Athletics batter during the first inning of a baseball game Tuesday, May 11, 2021, in Boston. (AP PhotoMary Schwalm)

Athletics: RHP James Kaprielian gets his first start in the majors Wednesday.

Red Sox: LHP Eduardo Rodríguez (5-0, 3.82 ERA) is unbeaten through six starts and has gone at least five innings in his last 34 starts.