Patrick Mazeika got his second walkoff RBI in four career games with a fielder's choice grounder in the ninth inning, helping the banged-up New York Mets rally to beat the Baltimore Orioles 3-2 on Tuesday night for their sixth straight win.

Mazeika pinch hit in the pitcher's spot with two on and one out against closer César Valdez and hit a grounder to first baseman Trey Mancini, whose throw home was a little high and too late to nab speedy Jonathan Villar as the former Oriole got a quick jump off third. 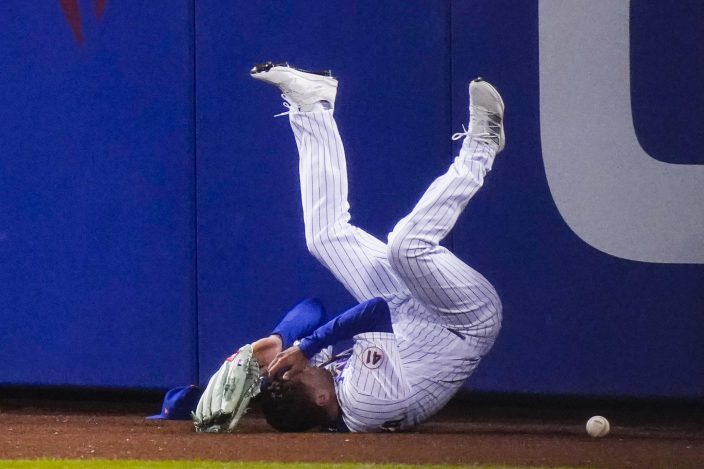 Mazeika also plated the winning run Friday with a similar fielder's choice in the 10th inning of a 5-4 victory over Arizona. And he had a go-ahead RBI on Sunday when he drew a bases-loaded walk as a pinch-hitter in the sixth inning. The 27-year-old third-string catcher still doesn't have a big league hit.

The inning started with an apparent tying homer from Kevin Pillar that was overruled after an umpire meeting. Pillar hit Valdez's second pitch over the wall in the left-field corner, and third base umpire Roberto Ortiz signaled fair, drawing immediate disagreement from the Orioles.

The umpire crew convened in the middle of the field and signaled foul ball after Pillar had finished rounding the bases. He returned from the dugout to continue his at-bat and ended up with a single, which was followed by Villar's single and a tying hit from Dominic Smith. 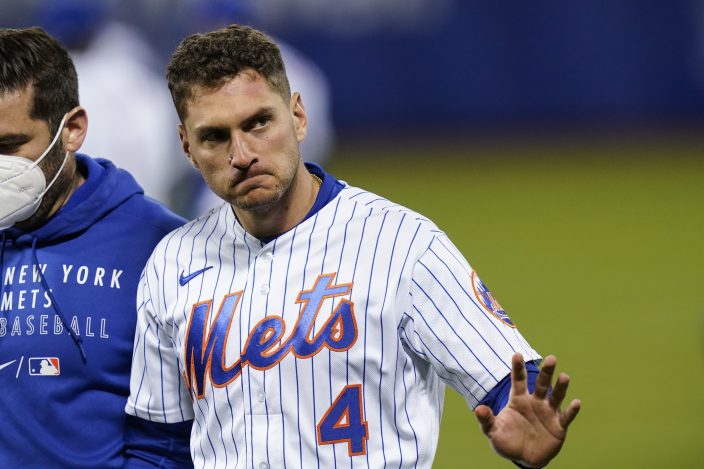 New York Mets' Albert Almora Jr. (4) gestures to fans after being injured during the eighth inning of the team's baseball game against the Baltimore Orioles on Tuesday, May 11, 2021, in New York. (AP PhotoFrank Franklin II)

Valdez (2-1) blew his third save in 11 chances. Jeurys Familia (1-0) dodged trouble in the eighth and got the win.

Jeff McNeil spoiled Means' bid for a second straight no-hitter by leading off the first inning with a sharp single, but the Mets second baseman was lifted two innings later with body cramps. The Mets also lost Albert Almora Jr. in the eighth after the center fielder crashed viciously into the outfield wall trying to catch Austin Hays' long fly.

That came hours after New York placed ace Jacob deGrom on the 10-day injured list with right side tightness. Lineup regulars Brandon Nimmo and J.D. Davis are also on the IL. 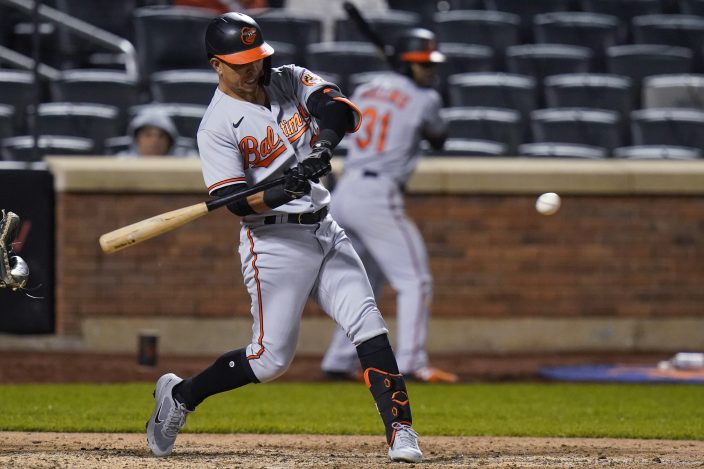 Baltimore Orioles' Ramon Urias hits a single during the ninth inning of the team's baseball game against the New York Mets on Tuesday, May 11, 2021, in New York. (AP PhotoFrank Franklin II)

Almora had Hays' drive in his mitt until he slammed face-first into the wall — the Mets unsuccessfully challenged that it was a catch — and Hays ended up with a triple. He later scored on Freddy Galvis' two-out bunt single for a 2-0 lead.

Michael Conforto made it 2-1 with an RBI single off Tanner Scott in the eighth, but Pete Alonso grounded into an inning-ending double play.

Means had five days of rest after no-hitting Seattle last week, when he threw a career-high 113 pitches in what was also his first complete game. He got a lighter workload Tuesday, throwing just 74 pitches over six innings with six hits allowed and three strikeouts. 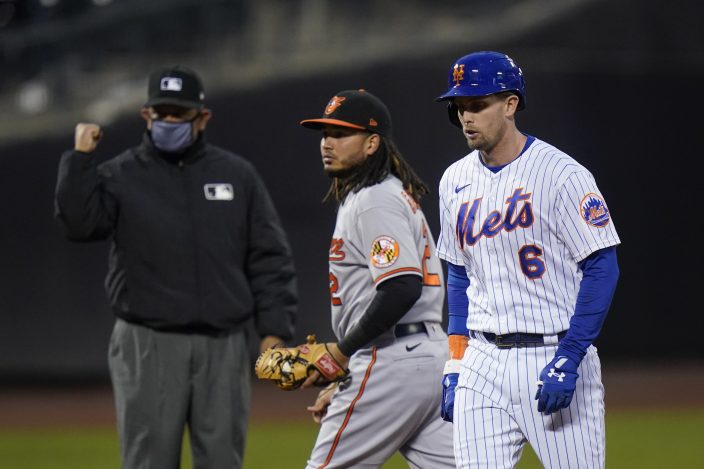 New York Mets' Jeff McNeil (6) walks away after being tagged out at second base by Baltimore Orioles' Freddy Galvis (2) during the third inning of a baseball game Tuesday, May 11, 2021, in New York. (AP PhotoFrank Franklin II)

Orioles manager Brandon Hyde said he wanted to limit the 28-year-old, a strategy made easier when Means' spot in the order came up with the bases loaded and one out against Stroman in the seventh.

Loup then retired Cedric Mullins to end the threat with Baltimore ahead 1-0. 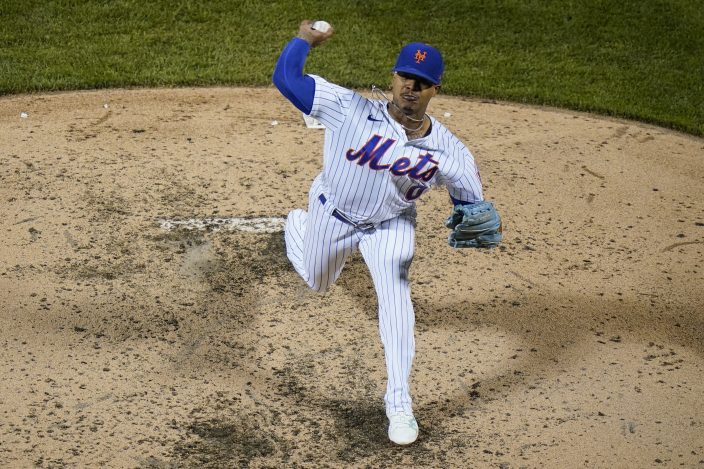 New York Mets' Marcus Stroman delivers a pitch during the sixth inning of the team's baseball game against the Baltimore Orioles on Tuesday, May 11, 2021, in New York. (AP PhotoFrank Franklin II)

Stroman was charged with one run in 6 1/3 innings, lowering his ERA to 2.01. He allowed four hits and two walks while striking out five, cruising into the seventh before loading the bases on two hits and an intentional walk.

McNeil lined another hit in the third but pulled up midway between first and second as he went for a double — he would have been out by several steps even with a full effort. He appeared only in minor discomfort but was replaced at second base by José Peraza the next inning.

McNeil's two hits lifted his average to .234 this season as he slowly pulls out of an early slump.

Almora laid face-down on the warning track for more than a minute before picking himself up with the help of a trainer and walking off under his own power. He was 0 for 3 to drop his average to .048.

The Mets did not provide an immediate update on his status.

Former Mets ace Matt Harvey will face New York for the first time Wednesday since unceremoniously splitting with the team in a 2018 trade to Cincinnati. Harvey, now with the Orioles, returned to Citi Field with the Reds later that season but did not pitch.

After struggling through stints with Cincinnati, the Los Angeles Angels and Kansas City, the 32-year-old has added a sinker and found success with Baltimore, going 3-2 with a 3.60 ERA in seven starts.

Orioles: Stewart (left hamstring strain) was held out of the starting lineup for a second straight day.

Mets: DeGrom exited his start Sunday with right side tightness. He’s already resumed playing catch, but New York isn’t sure if he’ll be ready to return when he’s eligible May 20. ... Nimmo (left index finger bone bruise) is ready to begin hitting off high-velocity machines and is closer to returning than Davis (sprained left hand). ... RHP Sean Reid-Foley was recalled from Triple-A Syracuse.