Manny Machado homered and tripled to drive in five runs, helping to make up for the absence of Fernando Tatis Jr. and two other teammates as the San Diego Padres beat the Colorado Rockies 8-1 Tuesday night.

The Padres were without Tatis, their star shortstop, after he tested positive for COVID-19 and was put on the injured list. Utility players Jurickson Profar and Jorge Mateo also were placed on the IL as part of baseball’s contact tracing health and safety protocols. 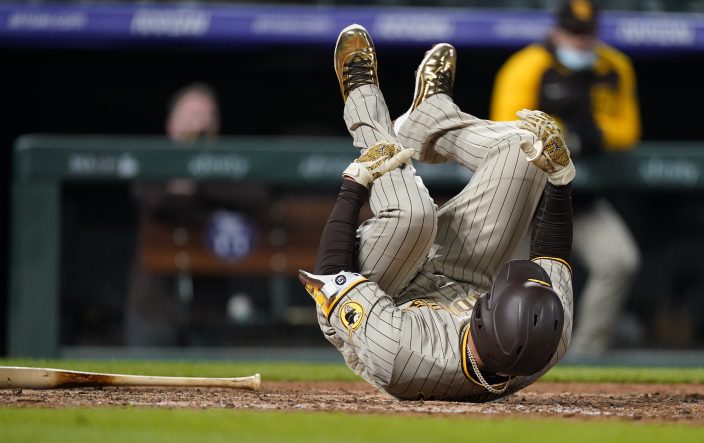 San Diego Padres' Manny Machado falls in the batter's box after fouling a ball off his foot during the eighth inning of the team's baseball game against the Colorado Rockies on Tuesday, May 11, 2021, in Denver. Machado remained in the game. (AP PhotoDavid Zalubowski)

The Padres also weathered the early departure of Wil Myers, who crashed into the right field wall in the first inning while catching Garrett Hampson’s deep fly ball.

Myers appeared shaken up on the play and was checked by team trainers but remained in the game until being replaced in right field by Tucupita Marcano in the bottom of the third inning. There was no immediate word from the Padres on Myers’ injury status. It was Colorado's sixth straight loss to San Diego dating to Aug. 30, 2020. They have been outscored 47-11 in that span.

Down 1-0 in the top of the fifth, the Padres went ahead when Machado followed Jake Croneworth’s double with a drive off Antonio Senzatela (1-4) that soared into the left-field bleachers. 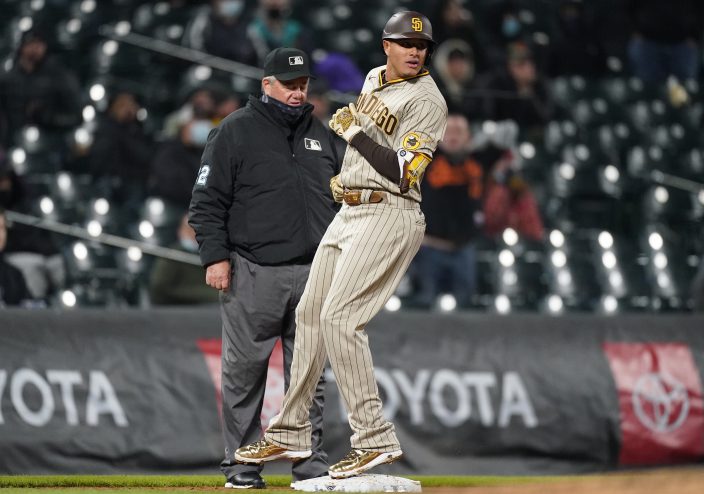 The Padres employed a pitching by committee approach ahead of Wednesday’s doubleheader at Colorado. Dinelson Lamet went the first two innings and allowed one run on one hit. Miguel Diaz (1-0) earned the win with three innings of scoreless relief. 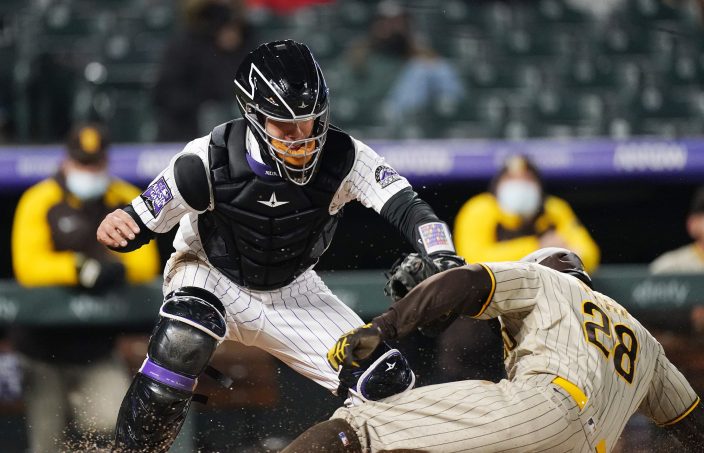 San Diego Padres' Tommy Pham, front, avoids the tag by Colorado Rockies catcher Dom Nunez to score on a ground ball by Ha-Seong Kim during the sixth inning of a baseball game Tuesday, May 11, 2021, in Denver. (AP PhotoDavid Zalubowski)

Padres: With Tatis, Profar and Mateo placed on the injured list, INF/OF Tucupita Marcano and RHP Nabil Crismatt were recalled from Triple-A El Paso and selected OF John Andreoli to the roster.

Rockies: 1B C.J. Cron has been placed on the 10-day injured list, retroactive to last Friday, with a lower back strain. Senzatela was activated from the IL prior to the game, returning from a right groin strain. 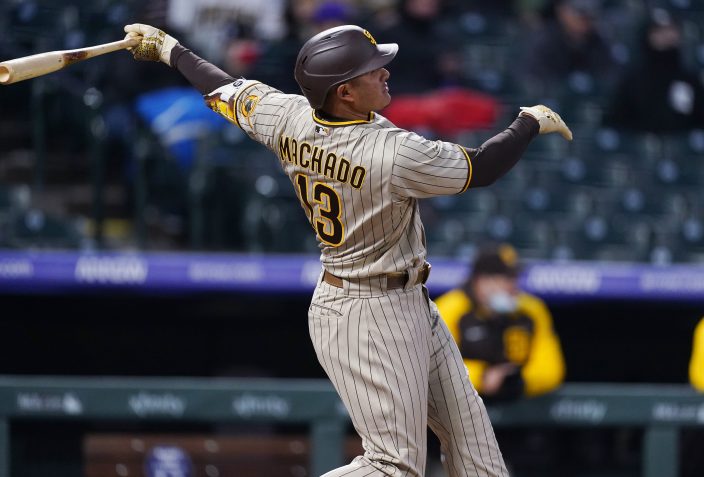 San Diego Padres' Manny Machado watches his two-run home run against the Colorado Rockies during the fifth inning of a baseball game Tuesday, May 11, 2021, in Denver. (AP PhotoDavid Zalubowski) 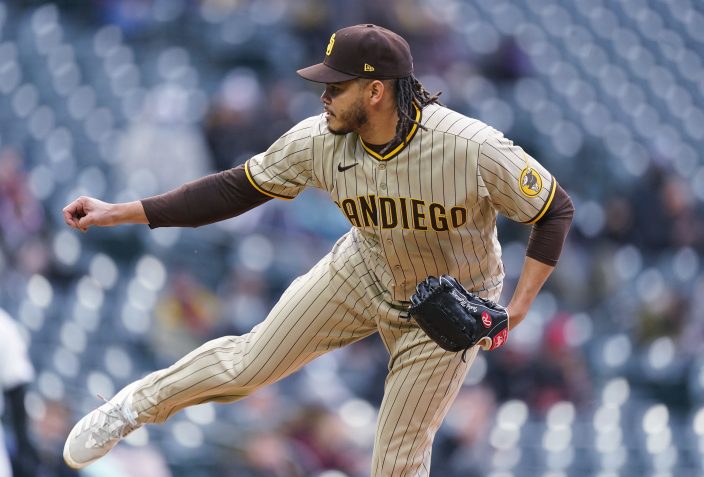 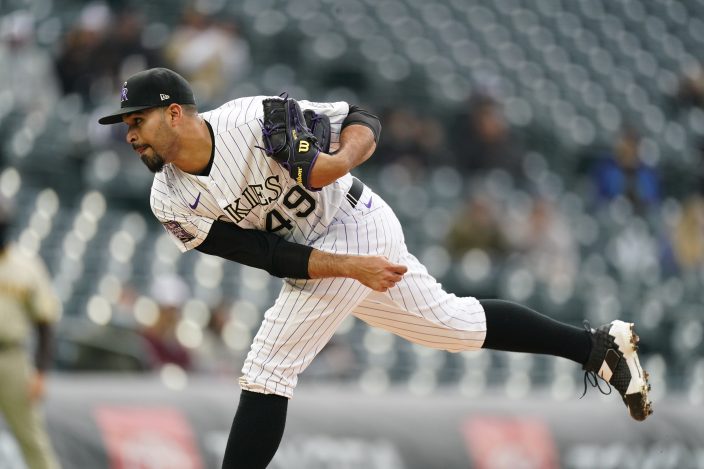 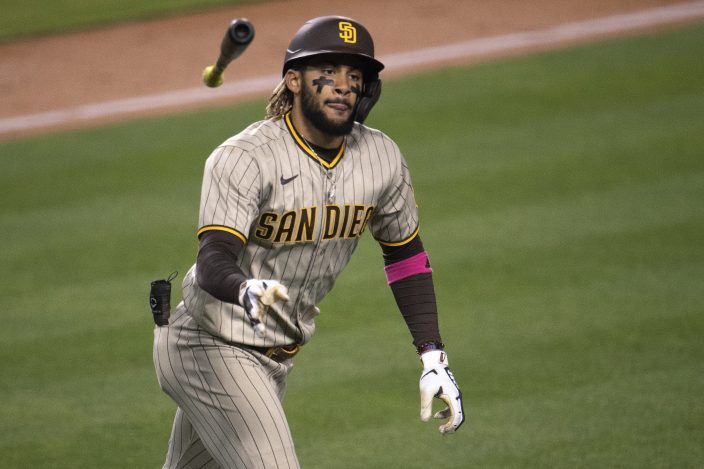 France drives in 4 as Padres rally past Rockies