The surge in Israeli-Palestinian violence has flummoxed the Biden administration in its first four months as it attempts to craft a Middle East policy it believes will be more durable and fairer than that of its predecessor.

Its early hesitation to wade more deeply into efforts to resolve the decades-long conflict has created a leadership vacuum that is exacerbated by political uncertainty in Israel and the Palestinian Authority, each of which is clamoring for outside support and unhappy with America’s new determination to toe a middle line.

Israelis and Palestinians alike have denounced the Biden administration's call for all sides to step back following clashes between Israeli security forces and Palestinians in east Jerusalem that escalated into rocket attacks on Israel from the Hamas-controlled Gaza Strip and retaliatory strikes from Israel’s military. 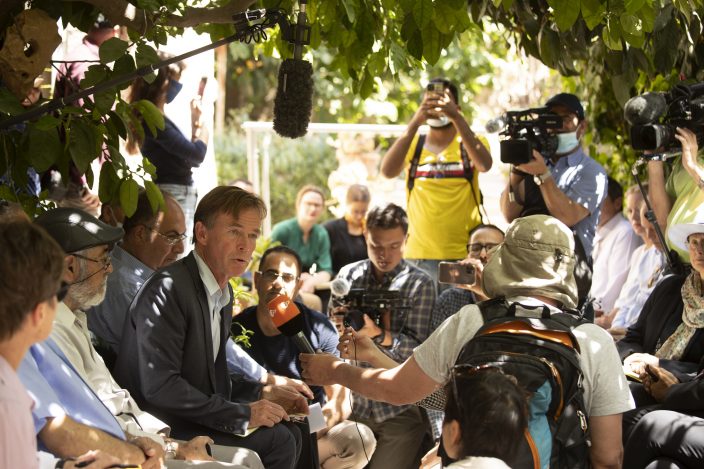 Sven Kuhn von Burgsdorff, the European Union representative for the Palestinian Territories speaks to residents of the Sheikh Jarrah neighborhood of east Jerusalem, where Palestinian families are under threat of forced eviction, Tuesday, May 11, 2021. (AP PhotoMaya Alleruzzo)

“The US State Department message is not acceptable to me,” Israel’s ambassador to the United States, Gilad Erdan, said on Twitter. “It is impossible to put in the same message statements by Israeli leaders who call for calm alongside instigators and terrorist organizations that launch missiles and rockets.”

On the Palestinian side, there is frustration that the U.S. has slow-walked a U.N. Security Council statement that it sees as too unfavorable to Israel.

“The continued paralysis of the Security Council on the situation in Palestine is unacceptable,” the Palestinian ambassador to the United Nations, Riyad Mansour, said Tuesday. “The international community, particularly the Security Council, must condemn all of Israel’s illegal actions.”

Advocates for both sides say the administration appears to be pursuing an interim strategy that lacks coherence and sends mixed messages to the parties, neither of which has shown a willingness to either listen or to back down.

The administration, unsurprisingly, has rejected that criticism.

“It is not that we failed to prioritize this,” State Department spokesman Ned Price said Tuesday, after giving a brief description of a call between Secretary of State Antony Blinken and his Israeli counterpart. “The United States is doing what we can knowing that our ability in certain situations is going to be in some cases limited."

Yet the Biden administration has also retained key elements of President Donald Trump’s policies, including several that broke with long-standing U.S. positions on Jerusalem and the legitimacy of Israeli settlements that the Palestinians believe are manifestly biased against them. The administration has said little would be accomplished with immediate, wholesale shifts in Israel-Palestinian policy

At the same time, Israelis fear that even subtle shifts away from Trump’s hard line on the Palestinians and Biden’s determination to re-enter the Iran nuclear deal represent a direct threat to its security even as the administration seeks to build on Trump-era Israeli-Arab normalization accords.

“The parties have basically been conditioned over the past four years,” said former U.S. Mideast negotiator Aaron David Miller, who served under both Republican and Democratic administrations. “The Trump sugar high for the Israelis and the vinegar high for the Palestinians have created a certain set of expectations that this administration hasn’t addressed.”

The administration has not yet named an ambassador to Israel nor indicated that it will appoint a special envoy for peacemaking. By contrast, Trump’s nomination of an ambassador to Israel was one of his earliest appointments, announced more than a month before inauguration, and President Barack Obama chose former Sen. George Mitchell to serve as his Middle East peace envoy on his second day in office.

“I realize the administration has lowballed and deprioritized the Middle East and Israeli-Palestinian issue. But the lack of an ambassador to Israel and a consul general in Jerusalem is a serious problem during a crisis," Miller said.

Some Democrats and other progressives are also voicing frustration.

“The United States must call for an immediate cease-fire and an end to provocative and illegal settlement activity. And we must also recommit to working with Israelis and Palestinians to finally end this conflict,” Sen. Bernie Sanders, the Vermont independent, said in a statement.

While it has categorically condemned Hamas rocket attacks on Israel and backed Israel’s absolute right to self-defense, the Biden administration has been yet either unwilling or unable to say whether the Palestinians meet the criteria to enjoy that same right of self-defense. It has also not modified long-held U.S. policy that the Palestinians are ineligible to take their grievances to the International Criminal Court because they are not a state.

This apparent contradiction, along with what the Palestinians consider to be a weak response to Israel's threatened evictions of Palestinian families from east Jerusalem that were a proximate cause of the latest tensions, have frustrated those looking for a new U.S. approach.

They note that the Biden administration, through a White House statement, has made clear that it believes “Palestinians and Israelis deserve equal measures of freedom, security, dignity and prosperity.”

“We're still waiting to see equal measures of empathy,” said Zaha Hassan, a visiting fellow at the Carnegie Endowment for International Peace and the lead author of a report it issued last month titled “Breaking the Israel-Palestine Status Quo.” “The administration needs to recognize that Palestinian rights need to be respected.”

Hassan and others have urged the administration to stop resisting international attempts to put pressure on Israel, like stalling a U.N. Security Council statement condemning the violence. Although it won't win Biden friends in Israel, "it will shore up U.S. credibility around the world and obviously with the Palestinians,” Hassan said.

Indians rally in 9th, top Mariners on throwing error in ...

César Hernández scored on a throwi ...