The 31-year-old Bumgarner (4-2) is starting to become the pitcher the Diamondbacks envisioned when they signed the four-time All-Star to an $85 million, five-year deal prior to the 2020 season.

Against the Marlins, he was completely in control, giving up just four hits that all came in different innings. He needed just 84 pitches to get through his outing and even added a sacrifice fly at the plate for his first RBI of the season. 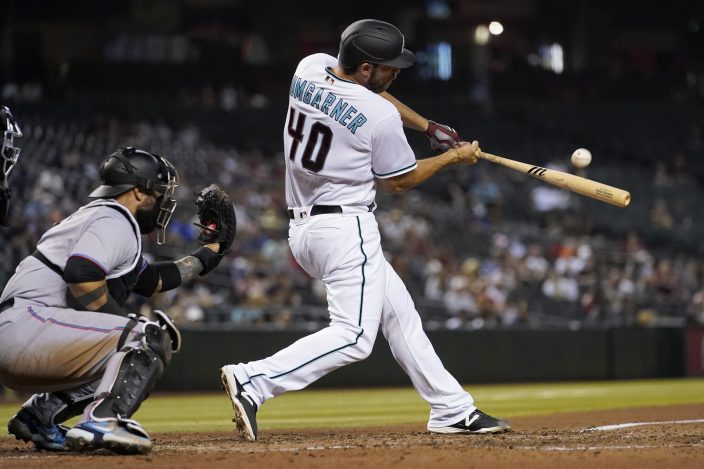 Arizona Diamondbacks' Madison Bumgarner (40) connects for a sacrifice fly during the fifth inning of a baseball game against the Miami Marlins, Tuesday, May 11, 2021, in Phoenix. (AP PhotoMatt York)

Bumgarner pitched seven hitless innings for a complete game that doesn't count as a no-hitter in the finale of a doubleheader against Atlanta on April 25 and is in the midst of a terrific five-game stretch that includes just three earned runs allowed over 30 innings.

MadBum's about-face has been a welcome change after a terrible 2020. The left-hander slogged through his worst season, finishing 1-4 with a 6.48 ERA. Even more alarming, his fastball rarely broke 90 mph and it was fair to wonder if the Diamondbacks had a made a huge mistake giving him a big contract.

These days, it appears he has plenty left in the tank. His fastball was routinely in the 92-93 mph range against the Marlins and he struck out a season-high nine. 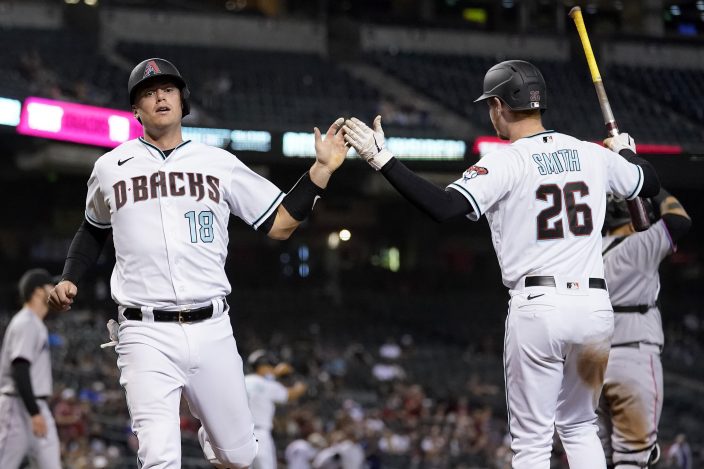 Arizona Diamondbacks' Carson Kelly (18) and Pavin Smith (26) celebrate after scoring on a double hit by David Peralta during the fifth inning of a baseball game against the Miami Marlins, Tuesday, May 11, 2021, in Phoenix. (AP PhotoMatt York)

The Diamondbacks broke the game open in the fifth when they sent 11 batters to the plate, scored five runs and pushed to a 6-0 lead. That chased starter Pablo López (0-3), who gave up six earned runs over 4 1/3 innings.

Bumgarner narrowly missed a three-run homer, settling for a sacrifice fly on a ball that carried to the left-field warning track. The big blow came when David Peralta hit a two-run double to right field. Pavin Smith and Eduardo Escobar also had RBI singles.

Nick Ahmed smacked a solo homer into the left-field bullpen to give the Diamondbacks a 1-0 lead in the second. The shortstop has slowly performed better after starting the season in a 3-for-41 (.073) slump. The homer pushed his average above .200 for the first time in about a month. 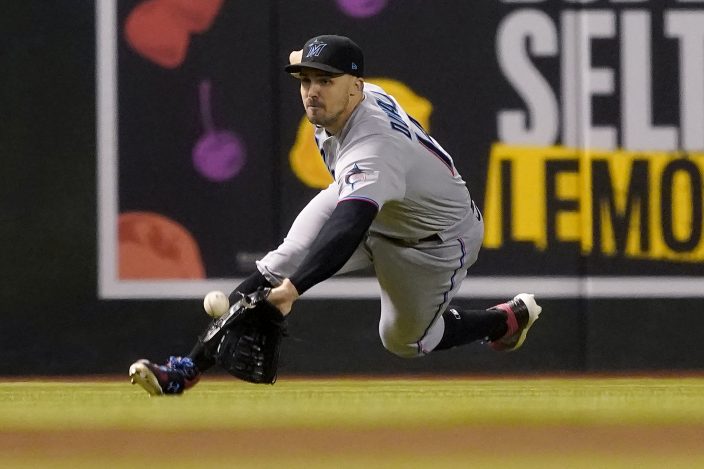 The Marlins cut Arizona's lead to 6-3 in the eighth by scoring three runs off reliever Kevin Ginkel. Jesús Aguilar hit a two-run homer during the rally, which ended when Chris Devenski struck out Brian Anderson.

Arizona piled on five more in the ninth, including Cabrera's three-run homer, and finished with 15 hits. 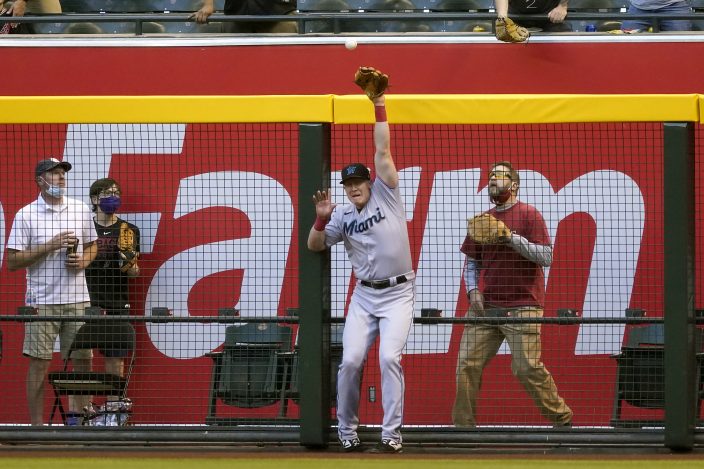 Diamondbacks: OF Ketel Marte (hamstring) came to Chase Field and went through a workout, including batting practice, fielding practice and running drills. Marte said he feels close to 100% and could play in games within a week. Manager Torey Lovullo didn't commit to a timetable but said Marte looked “fantastic." ... RHP Taylor Widener (groin) threw a bullpen Monday and Lovullo said Widener was feeling good. The manager said Widener would throw a simulated game Thursday of around 50-55 pitches.

COME AND GET IT 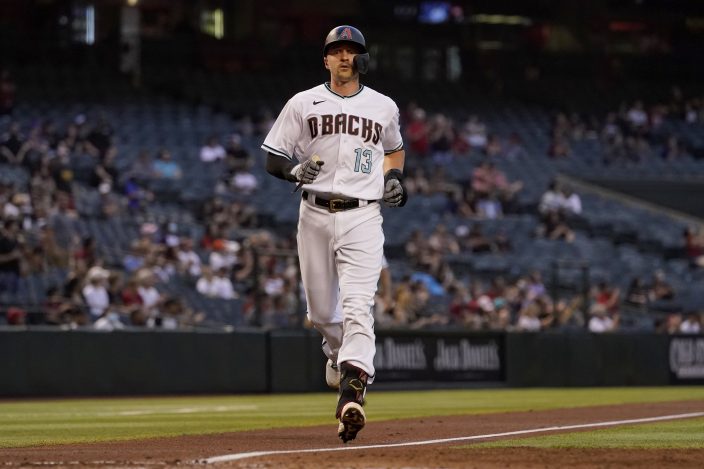 Arizona Diamondbacks' Nick Ahmed rounds the bases after hitting a solo home run against the Miami Marlins during the second inning of a baseball game, Tuesday, May 11, 2021, in Phoenix. (AP PhotoMatt York)

There was a mobile medical trailer outside Chase Field by the ticket windows offering COVID-19 vaccinations to the public.

The four-game series continues Wednesday when Arizona sends RHP Zac Gallen (1-1, 3.04 ERA) to the mound. The Marlins hadn't decided on their starter and will likely go with a combo effort from several pitchers.