Gavin Lux hit a dramatic three-run homer in the eighth inning, and the struggling Los Angeles Dodgers rallied late for a 6-4 victory over the Seattle Mariners on Tuesday night.

Lux pounded his chest and gestured to his dugout while his first homer of the season landed in the right-field bleachers for the defending World Series champions, who opened a nine-game homestand with just their sixth win in 21 games.

Corey Seager had a two-run single in the seventh for the Dodgers, and Max Muncy hit an early homer as they fell behind 4-1. 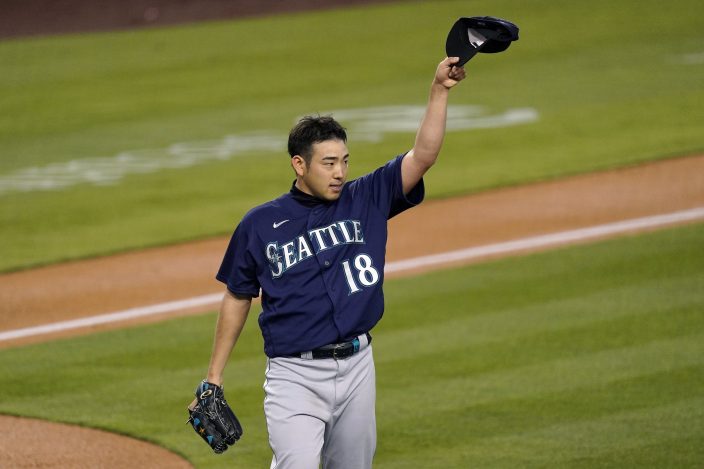 Seattle Mariners starting pitcher Yusei Kikuchi takes his hat off to right fielder Mitch Haniger after Haniger made a catch on a ball hit by Los Angeles Dodgers' Gavin Lux during the third inning of an interleague baseball game Tuesday, May 11, 2021, in Los Angeles. (AP PhotoMark J. Terrill)

But Lux, who has struggled to keep his batting average above .200 in an injury-plagued start to his season, delivered the game-changing hit that the Dodgers have lacked lately off Rafael Montero (3-2). The Seattle closer had escaped a tough jam in the seventh.

Mitch Haniger hit two solo homers and Kyle Seager added a two-run shot for the Mariners, who have lost three straight on their five-game road trip. 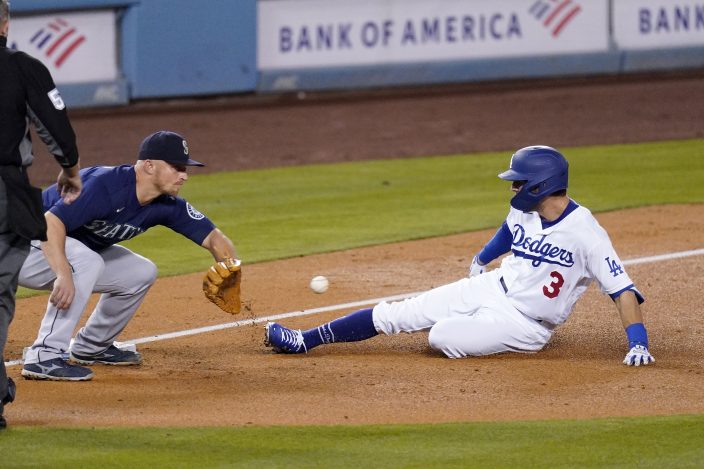 Los Angeles Dodgers' Chris Taylor, right, is safe at third for a triple ahead of the tag of Seattle Mariners third baseman Kyle Seager during the fourth inning of an interleague baseball game Tuesday, May 11, 2021, in Los Angeles. (AP PhotoMark J. Terrill)

Seattle couldn't capitalize on a strong start by Yusei Kikuchi, who racked up a career-best 11 strikeouts while pitching six-hit ball into the seventh inning.

Kikuchi outdueled Walker Buehler, who gave up homers for three of the four hits he allowed over seven innings while striking out eight.

Haniger connected for a 402-foot homer in the first inning. He then saved at least one run in the second with a sliding catch on Lux's fly to right, stranding two Dodgers. 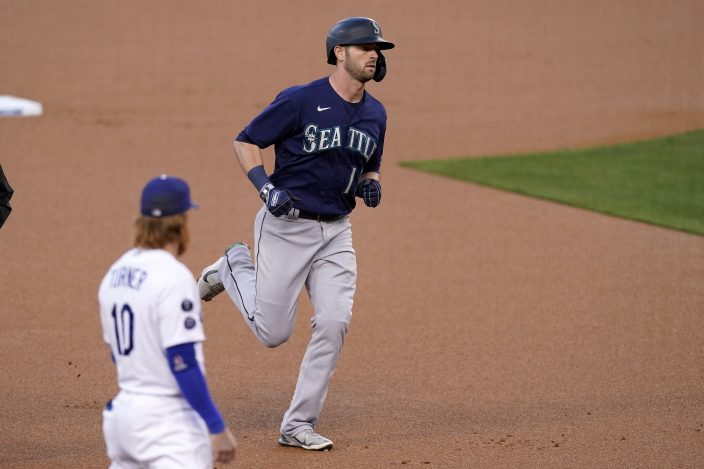 Seager lofted a high homer to right off a good inside cutter from Buehler in the fourth, putting Seattle up 3-0 with his third career homer at his younger brother's home ballpark.

Muncy's 433-foot homer in the fourth was his sixth of the season.

Haniger’s third career multi-homer game, his first since June 2018, gave him a team-leading 10 home runs this year and evoked memories of the power he showed off during his All-Star campaign in 2018, when he hit 26 homers in his only full major league season. 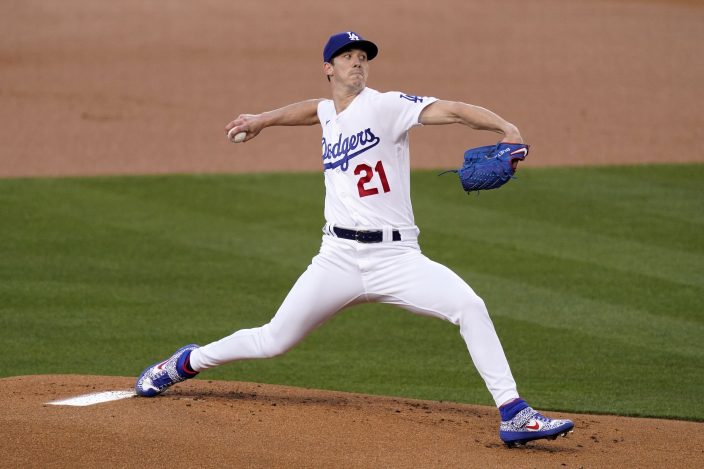 Los Angeles Dodgers starting pitcher Walker Buehler throws to the plate during the first inning of an interleague baseball game against the Seattle Mariners Tuesday, May 11, 2021, in Los Angeles. (AP PhotoMark J. Terrill)

After the Dodgers loaded the bases and chased Kikuchi in the seventh, reliever Anthony Misiewicz got a generous called third strike on Mookie Betts before Corey Seager's two-out single trimmed Seattle's lead to 4-3.

Dodgers: AJ Pollock drew a pinch-hit walk in the seventh, his first action since straining his hamstring Friday in Anaheim. ... Cody Bellinger is “progressing nicely” in his return from a hairline leg fracture, manager Dave Roberts said. Bellinger is still running at 60%. ... LHP David Price (strained right hamstring) threw a simulated inning. He will be activated after he throws to hitters once or twice. ... RHP Tony Gonsolin (right shoulder inflammation) will throw two innings in Arizona this week. He will make minor league rehab starts before he returns.

Los Angeles LHP Julio Urías (4-1, 3.59 ERA) takes the mound for the series finale against RHP Justin Dunn (1-0, 3.51). Urías has gone five innings in all seven of his starts, but he was roughed up by the Angels for five runs last Friday.