Rockets streamed out of Gaza and Israel pounded the territory with airstrikes early Wednesday as the most severe outbreak of violence since the 2014 war took on many hallmarks of that devastating 50-day conflict, with no endgame in sight.

Gaza's Hamas rulers and other militant groups have fired barrages of hundreds of rockets that at times have overwhelmed Israel's missile defenses, causing air raid sirens and explosions to echo across Tel Aviv, Israel's biggest metropolitan area, and other cities.

Israeli airstrikes have leveled multistory buildings across the Gaza Strip, where 2 million Palestinians have lived under a crippling Israeli-Egyptian blockade since Hamas took power in 2007. Warning shots have allowed civilians to evacuate the buildings, but the material losses will be immense. Israel faced heavy criticism over the tactic during the 2014 war. 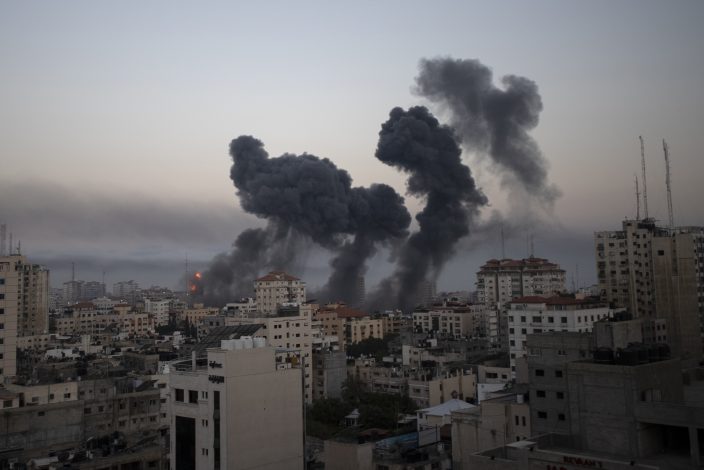 Smoke rises after Israeli airstrikes on Gaza City, Wednesday, May 12, 2021. Rockets streamed out of Gaza and Israel pounded the territory with airstrikes early Wednesday as the most severe outbreak of violence since the 2014 war took on many of the hallmarks of that devastating 50-day conflict, with no endgame in sight. (AP PhotoKhalil Hamra)

The Israeli military said Palestinian militants have fired more 1,050 rockets since the conflict began, with 200 of them falling short and landing inside Gaza. 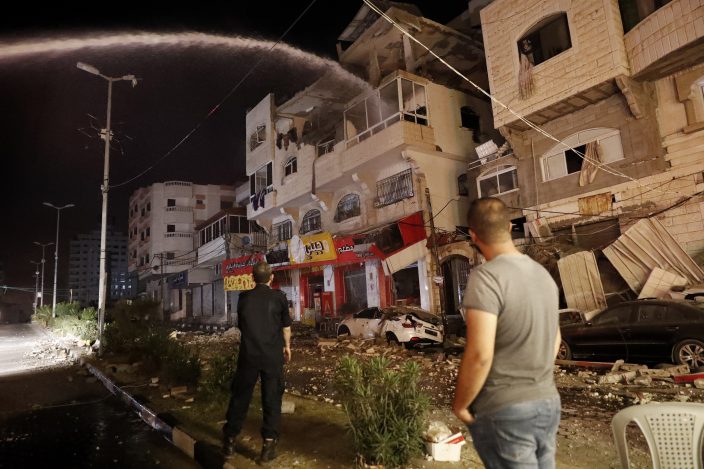 Samah Haboub, a mother of four in Gaza, said she was thrown across her bedroom in a “moment of horror” by an airstrike on an apartment tower next door. She and her children, aged three to 14, ran down the stairway of their apartment block along with other residents, many of them screaming and crying.

“There is almost no safe place in Gaza," she said.

The latest eruption of violence began a month ago in Jerusalem, where heavy-handed police tactics during the Muslim holy month of Ramadan and the threatened eviction of dozens of Palestinian families by Jewish settlers ignited protests and clashes with police. A focal point was the Al-Aqsa mosque compound, a holy site sacred to Jews and Muslims. 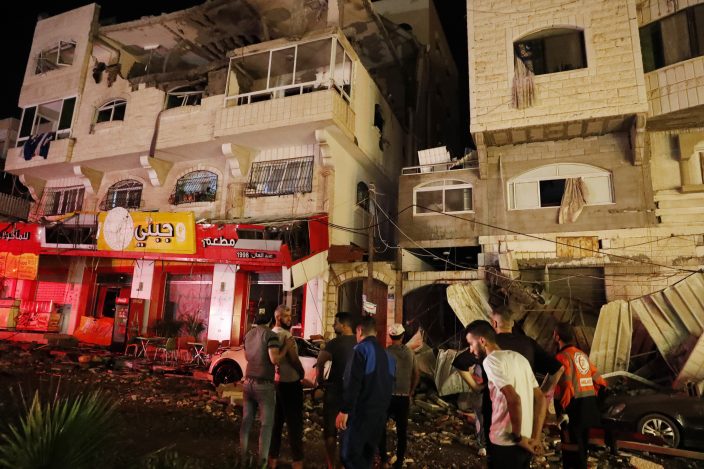 Firefighters and youths inspect destroyed buildings after it was hit by Israeli airstrikes, in Gaza City, early Wednesday, May 12, 2021. Israel on Tuesday stepped up its attacks on the Gaza Strip, flattening a high-rise building used by the Hamas militant group and killing at least a few militants in their hideouts as Palestinian rockets rained down almost nonstop on parts of Israel.(AP PhotoAdel Hana)

Israel and Hamas have fought three wars since the Islamic militant group seized power in Gaza from rival Palestinian forces in 2007. The conflicts ended after regional and international powers convinced both sides to accept an informal truce.

While the violence has been widely condemned, there is no sign that either side is willing to back down. Prime Minister Benjamin Netanyahu has vowed to expand the offensive, saying “this will take time,” and the unrest in Jerusalem has spread to the occupied West Bank and within Israel itself as Hamas has called for a full-scale Palestinian intifada, or uprising.

The Gaza Health Ministry said the 35 dead include 12 children and 3 women, with another 233 people wounded. Ministry spokesman Ashraf al-Kidra said the targeting of residential neighborhoods left people “in a state of panic.” 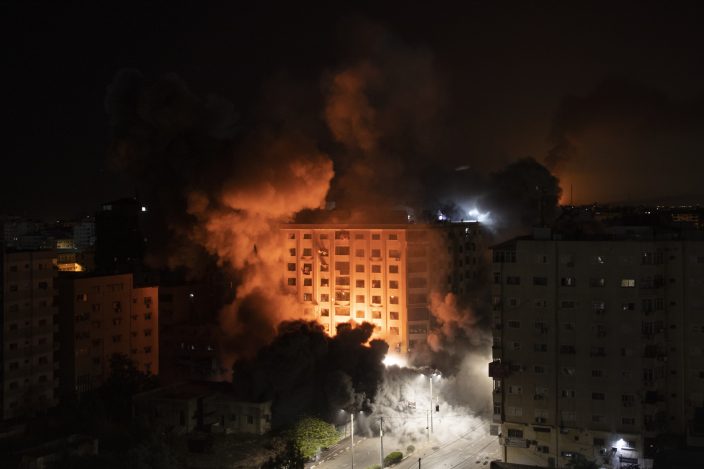 Smoke caused by Israeli airstrikes are seen at a residential building in Gaza City, early Wednesday, May 12, 2021. (AP PhotoKhalil Hamra)

In the Israeli city of Lod, a 52-year-old man and his 16-year-old daughter were killed early Wednesday when a rocket had landed in the courtyard of their one-story home. Their car parked outside was wrecked and the interior of the house was filled by debris.

Lod also saw heavy clashes after thousands of mourners joined a funeral for an Arab man killed by a suspected Jewish gunman the previous night. The crowd fought with police, and set a synagogue and some 30 vehicles, including a police car, on fire, Israeli media reported. Paramedics said a 56-year-old man was seriously hurt after his car was pelted with stones.

“An intifada erupted in Lod, you have to bring in the army,” the city’s mayor, Yair Revivo, said. Authorities have declared a state of emergency and ordered a deployment of paramilitary border guards from the West Bank as reinforcements. 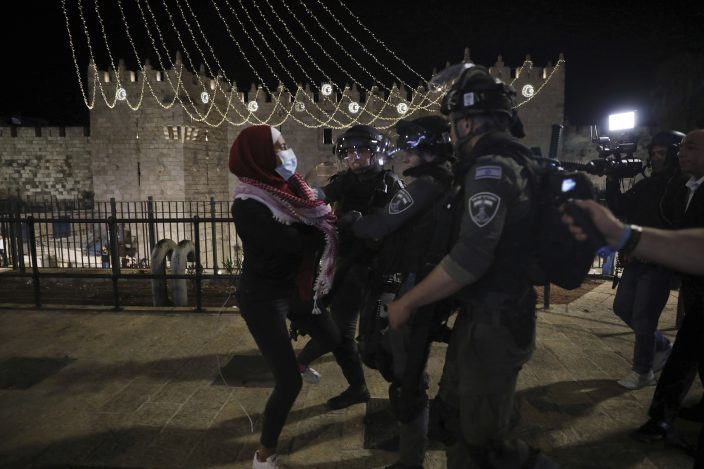 Israeli police scuffle with a Palestinian woman outside of the Damascus Gate to the Old City of Jerusalem Tuesday, May 11, 2021. A confrontation between Israel and Hamas sparked by weeks of tensions in contested Jerusalem escalated Tuesday as Israel unleashed new airstrikes on Gaza while militants barraged Israel with hundreds of rockets. (AP PhotoMahmoud Illean)

In neighboring Ramle, ultra-nationalist Jewish demonstrators were filmed attacking cars belonging to Arabs. In the northern port town of Acre, protesters torched a Jewish-owned restaurant and hotel. Police arrested dozens of others at Arab protests in other towns.

Opponents of Netanyahu have been trying to forge a government to oust him, but they are deeply divided among themselves and will likely need the support of an Arab-backed party with Islamist roots. The current tensions might deter the party's leader, Mansour Abbas, from joining a coalition with Jewish parties, at least for the time being. 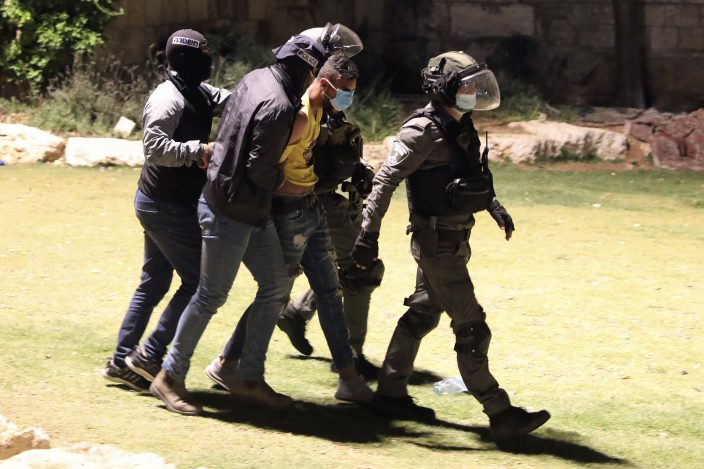 Israeli police detain a Palestinian outside of the Damascus Gate to the Old City of Jerusalem Tuesday, May 11, 2021, during clashes. A confrontation between Israel and Hamas sparked by weeks of tensions in contested Jerusalem escalated Tuesday as Israel unleashed new airstrikes on Gaza while militants barraged Israel with hundreds of rockets. (AP PhotoMahmoud Illean)

The sides have three more weeks to reach a deal. If they fail, Israel would likely begin an unprecedented fifth election campaign in just over two years.

Netanyahu appeared with one of his rivals, Defense Minister Benny Gantz, on Tuesday in a show of unity. Gantz said Israel’s strikes were “only the beginning” and the military said it was activating some 5,000 reservists and sending troop reinforcements to the Gaza border. 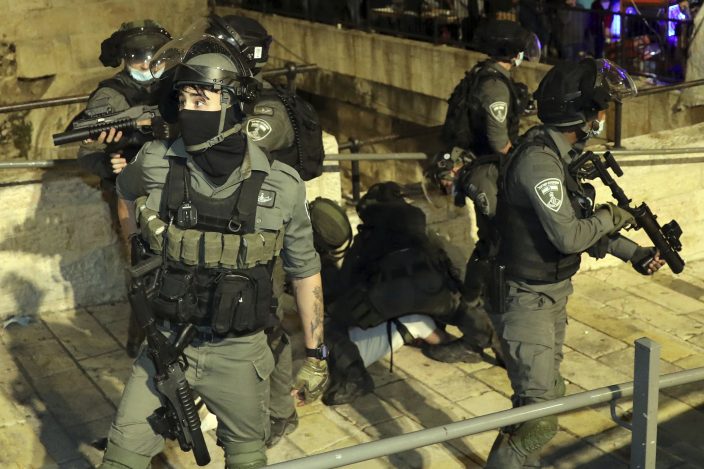 Israeli border police detain a Palestinian outside of the Damascus Gate to the Old City of Jerusalem Tuesday, May 11, 2021. A confrontation between Israel and Hamas sparked by weeks of tensions in contested Jerusalem escalated Tuesday as Israel unleashed new airstrikes on Gaza while militants barraged Israel with hundreds of rockets. (AP PhotoMahmoud Illean)

On Monday evening, Hamas began firing rockets from Gaza. From there on, the escalation was rapid.

Hamas has not commented on Israel's claims that it has killed dozens of fighters, including a number of senior commanders. Islamic Jihad confirmed that three senior commanders were killed in a strike on their hideout in a Gaza City apartment building.

Netanyahu said Israel had attacked hundreds of targets. The fiercest attack was a set of airstrikes that brought down an entire 12-story building. The building housed important Hamas offices, as well as a gym and some start-up businesses. Israel fired a series of warning shots before demolishing the building, allowing people to flee and there were no casualties.

Fighter jets struck the building again after journalists and rescuers had gathered around. There was no immediate word on casualties. The high-rise stood 200 meters (650 feet) away from the Associated Press bureau in Gaza City, and smoke and debris reached the office.

Soon after the bombing, Hamas announced that it would resume its attacks, and fired 100 rockets at the Israeli desert town of Beersheba. Hamas said the renewed barrage was in response to the strike on the building.

Diplomats sought to intervene, with Qatar, Egypt and the United Nations working to deliver a cease-fire. All three serve as mediators between Israel and Hamas.

The U.N. Security Council planned to hold its second closed emergency meeting in three days Wednesday on the escalating violence, an indication of growing international concern. Council diplomats, speaking on condition of anonymity because discussions have been private, said the U.N.’s most powerful body did not issue a statement because of U.S. concerns that it could escalate tensions.

Israel unleashes strikes after vowing to press on in Gaza