ISRAEL-PALESTINIANS — Rockets streamed out of Gaza and Israel pounded the territory with airstrikes as the most severe outbreak of violence since the 2014 war took on many hallmarks of that devastating 50-day conflict, with no endgame in sight. Gaza’s Hamas rulers and other militant groups have fired barrages of hundreds of rockets that at times have overwhelmed Israel’s missile defenses, causing air raid sirens and explosions to echo across Tel Aviv, Israel’s biggest metropolitan area, and other cities. The Palestinian death toll in Gaza rose to 35. Five Israelis have been killed. By Fares Akram and Joseph Krauss. SENT: 1,250 words, photos. 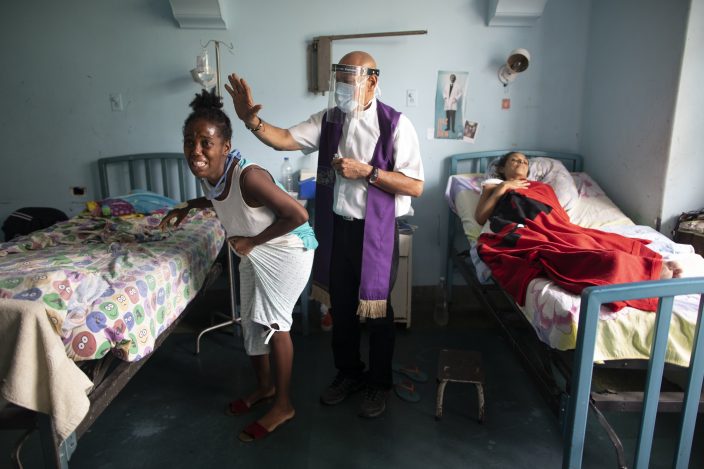 Father Felix Mendoza, a Venezuelan Catholic priest, center, prays over a woman who cries, saying she is in physical pain, at a public hospital in Caracas, Venezuela, Tuesday, May 11, 2021, amid the new coronavirus pandemic. Father Felix has been visiting patients at the hospital to comfort the sick, for the last 20 years. (AP PhotoAriana Cubillos)

UNITED STATES-ISRAEL-PALESTINIANS-ANALYSIS — The surge in Israeli-Palestinian violence has flummoxed the Biden administration as it attempts to craft a Middle East policy. The administration’s early hesitation has created a leadership vacuum that is exacerbated by political uncertainty in Israel and the Palestinian Authority. By Diplomatic Writer Matthew Lee. SENT: 920 words, photos.

VIRUS OUTBREAK-INDIA-VARIANTS — A potentially worrisome variant of the coronavirus detected in India may spread more easily, but the country is behind in doing the kind of testing needed to track it and understand it better. The World Health Organization designated the new version of the virus a “variant of concern” based on preliminary research, alongside those that were first detected in Britain, South Africa and Brazil but have spread to other countries. By Aniruddha Ghosal and Krutika Pathi. SENT: 750 words, photos.

CONGRESS-DIVIDED REPUBLICANS — House Republicans seem ready to toss Rep. Liz Cheney from her leadership post after she repeatedly rebuked former President Donald Trump for his false claims of election fraud and his role in fomenting the Jan. 6 U.S. Capitol attack. Cheney says she “will not sit back and watch in silence.” By Alan Fram and Kevin Freking. SENT: 990 words, photos. UPCOMING: 1,100 words after 9 a.m. meeting. 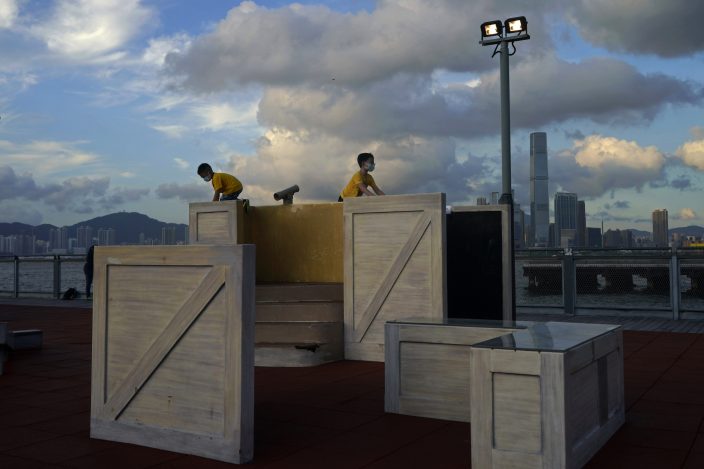 Children wearing face masks to prevent the spread of coronavirus, play at a park in Hong Kong, Tuesday, May 11, 2021. (AP PhotoKin Cheung)

BESIEGED-PUBLIC-SERVANTS — Historically, public service jobs have given people a chance to give back to their communities while earning solid benefits, maybe even a pension. But many public servants no longer feel the love. They’re battered and burnt out. They’re stretched by systems where shortages are common. Colleagues are retiring early or resigning. There are mental breakdowns, substance abuse and even suicide, especially among first responders. The pandemic has only made matters worse. By National Writer Martha Irvine. SENT: 2,080 words, photos. An abridged version of 1,020 words is also available.

VIRUS-OUTBREAK-VETERINARIAN-BACKLOG — Veterinarians nationwide are dealing with a COVID-19 pet boom. They are so backlogged they can’t take new patients, even when extending hours and hiring additional staff. Many vets have complained of burnout and compassion fatigue. Veterinary schools can’t produce graduates quickly enough, with jobs for veterinarians and vet techs projected to grow faster than other occupations for years to come. By Kelli Kennedy. SENT: 720 words, photos, video. With VIRUS-OUTBREAK-THE-LATEST. 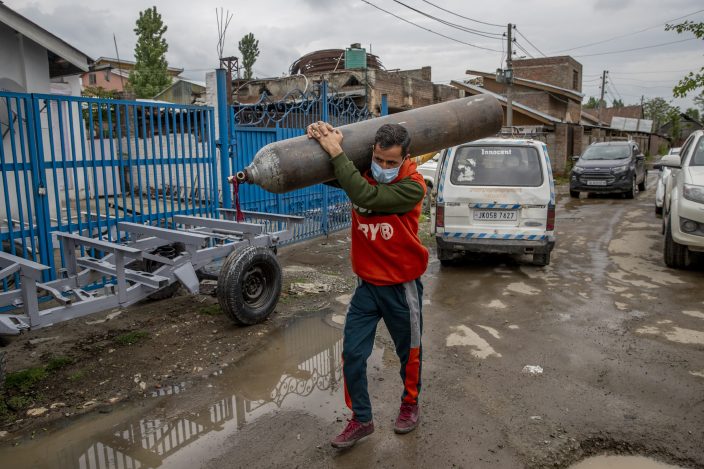 Showkat Ahmed War carries an empty oxygen cylinder to get it refilled at a gas supplier facility in Srinagar, Indian controlled Kashmir, Tuesday, May 11, 2021. War traveled about 40 miles to refill the cylinder needed for his ailing father due to the huge demand for oxygen after the rise in COVID-19 cases. (AP Photo Dar Yasin)

CONGRESS-ELECTIONS BILL — Republicans in the Senate mount an expansive case against sweeping voting and election legislation from Democrats, pushing to roll back proposals for mail-in ballots, 24-hour drop boxes and other changes in an increasingly charged national debate. SENT: 1,160 words, photos.

CHINA-XINJIANG BIRTHRATE — Xinjiang in far western China had the sharpest known decline in birthrates between 2017 and 2019 of any territory in recent history, according to a new analysis by an Australian think tank. SENT: 920 words, photos.

UNITED-NATIONS-SUDAN-SOUTH-SUDAN-ABYEI — The U.N. Security Council voted unanimously to extend the mandate of the nearly 3,700-strong peacekeeping force in the disputed Abyei region on the Sudan-South Sudan border until Nov. 15. SENT: 550 words.

IMMIGRATION-BORDER-CROSSINGS — The number of unaccompanied children encountered on the U.S. border with Mexico in April eased from an all-time high a month earlier, while more adults were found coming without families, authorities say. SENT: 540 words, photos.

GEORGIA CHASE-DEADLY SHOOTING — Attorneys for a white father and son charged with chasing and killing Ahmaud Arbery are asking a judge to allow evidence of the slain Black man’s past problems to be presented when their clients stand trial for murder. SENT: 490 words, photos. UPCOMING: Court hearing at 10 a.m.

INTERNET-SERVICE-DISCOUNT — Americans can begin applying for $50 off their monthly internet bill as part of an emergency government program to keep people connected during the pandemic. By Technology Writer Tali Arbel. SENT: 430 words, photos.

UNITED NATIONS-GLOBAL ECONOMIC FORECAST — The United Nations responded to the rebounding Chinese and U.S. economies by revising its global economic forecast upward to 5.4% growth for 2021, but it warned that surging COVID-19 cases and inadequate availability of vaccines in many countries threaten a broad-based recovery. SENT: 610 words, photo.

OBIT-NORMAN LLOYD — Norman Lloyd, whose role as kindly Dr. Daniel Auschlander on TV’s “St. Elsewhere” was a single chapter in a distinguished stage and screen career that put him in the company of Orson Welles, Alfred Hitchcock, Charlie Chaplin and other greats, has died. He was 106. By Entertainment Writers Lynn Elber and Mark Kennedy. SENT: 650 words, photos.