Other than teammate Leon Draisaitl’s 81 points entering play Tuesday, no one else was within 30 points of McDavid in his bid to win a second Hart Trophy.

Determining the league’s other award finalists is far more challenging, given how difficult it is to judge one player’s production versus another when teams played division-only opponents over a condensed 56-game schedule. 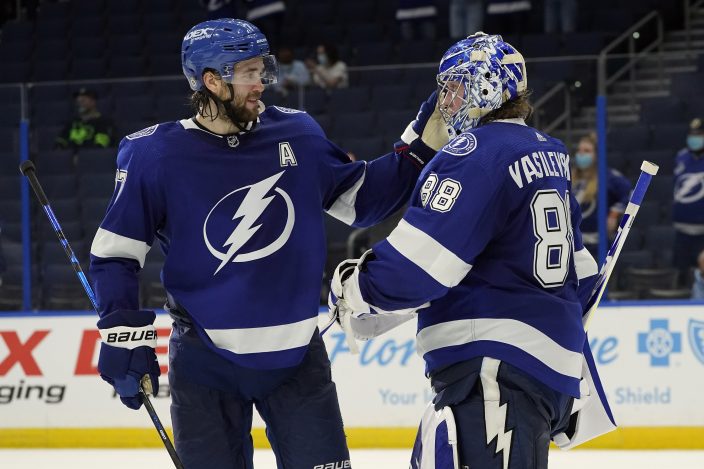 “That’s the one thing that is really going to make it difficult because the fact is there’s been so many games in such a short amount of time,” NBC analyst Pierre McGuire said. “And what happens in the North (Division) may be a little bit different than what happens in the West or the Central or the East.”

Voters will have to rate players on a curve based on the unique divisional differences.

If the all-Canadian North could be considered one of the NHL’s weakest divisions based on separation between the top four and bottom three teams, the East and Central might have been the toughest. They were the only divisions to feature five teams with a positive goal-differential. The East also had the fewest points, 29, separating first and sixth-place teams. 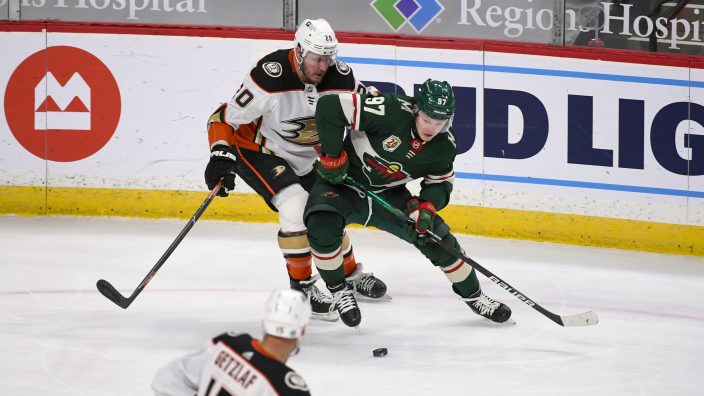 McGuire believes the toughest decisions will be between the Jack Adams (coach of the year) and Selke Trophy (top defensive forward).

Among the candidates making a case for coach of the year honors are Carolina’s Rod Brind’Amour, Florida’s Joel Quenneville and Minnesota’s Dean Evason. As for Selke, McGuire wondered whether the award, predominantly issued to centers, might go to a winger for the first time since Dallas’ Jere Lehtinen won in 2003. The wingers deserving consideration include Boston’s Brad Marchand, Vegas’ Mark Stone and Florida’s Aleksander Barkov. 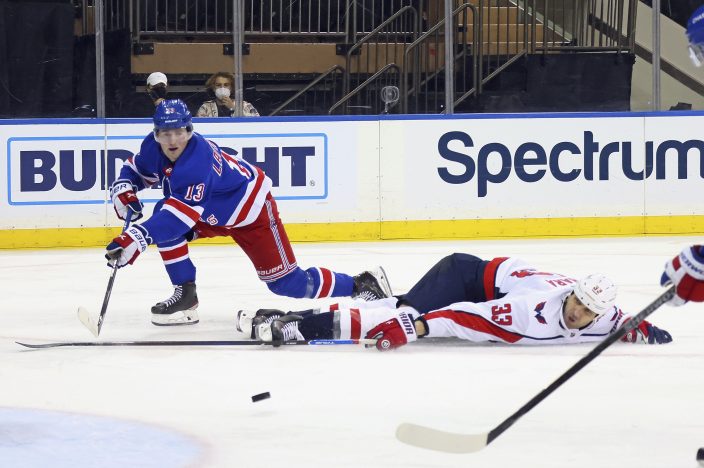 Associated Press hockey writers Larry Lage, John Wawrow and Stephen Whyno weigh in with their predictions with the postseason and awards season coming up fast:

Lage: Connor McDavid, Edmonton: “The 24-year-old superstar will win the award for the second time after reaching 100 points in 53 games, becoming the first player to pull off that feat in a season since Mario Lemieux and Jaromir Jagr did it a quarter-century ago.”

Whyno: McDavid: “It’s McDavid’s world. He’s the best player in hockey, and he had the best season. This could be unanimous.”

Lage: Philipp Grubauer, Colorado: “In a tight race, he wins for helping the Avalanche enjoy their highest points percentage in 16 seasons with one of the NHL’s best goals-against average and heaviest workloads.”

Whyno: Vasilevskiy: “All he does is win, win, win. Vasilevskiy led the league in victories and also prevented more goals that would have been scored on an average netminder.”

Lage: Adam Fox, New York Rangers: “The 23-year-old New Yorker led the league’s defensemen in scoring when his season ended Saturday, providing a silver lining for a franchise that missed the playoffs for the third time in four years.”

Whyno: Victor Hedman, Tampa Bay: “Hedman is the best defenseman in the world and showed it by winning playoff MVP honors during the Lightning’s 2020 Stanley Cup run. Adam Fox had a great year, and will win a Norris one day, but this is still Hedman’s time.”

Lage: Kirill Kaprizov, Minnesota Wild. “The 24-year-old Russian easily led NHL rookies in goals scored and had a cushion as the points leader going into the final week of the regular season.” .

Wawrow: Kaprizov: “Anyone capable of pushing the Wild into the NHL’s top-10 of scoring offenses for just the second time in more than a decade deserves credit.”

Whyno: Kaprizov: “Even grading Kaprizov on a curve at 24, and having years of pro experience from the KHL, he has been electric and a major reason the Wild made the playoffs. Dallas forward Jason Robertson a close second.”

Lage: Patrice Bergeron, Boston: “One of the all-time great two-way forwards led the league in faceoff percentage and was feisty as usual when backchecking. He has won the award four times, matching Hall of Famer Bob Gainey for the most in league history.”

Wawrow: Mark Stone, Vegas: “Stone plays in all situations and complements his offensive production with steadiness as a defender. The only thing missing are faceoff numbers. Shrug.”

Whyno: Bergeron: “Bergeron led the NHL in faceoff percentage and was among the top puck possession players in the league. He can still do it all at age 35.”

Lage: Auston Matthews, Toronto: “It’s time for him to win the award recognizing the combination of being a gentleman with skills after finishing second last year.”

Whyno: Slavin: “It’s about time a defenseman wins this award. Slavin draws all the tough defensive assignments and never takes penalties. He has a total of 2 penalty minutes for putting the puck over the glass. That’s it.”

Lage: Rod Brind’Amour, Carolina: “The third-year coach led the Hurricanes to their first division title since 2006, when they went on to hoist the Stanley Cup.”

Wawrow: Dean Evason, Minnesota: “The Wild were the one team not on everyone’s preseason radar as a playoff contender, and still have an outside shot of finishing second in the West.”

Whyno: Brind’Amour: “Brind’Amour has said coaching is ‘overrated,’ but his work has been underappreciated for some time now. With the Hurricanes atop the NHL, it’s time for Brind’Amour to get rewarded."

Whyno is a voting member of the Professional Hockey Writers Association this year.