The British economy contracted by a quarterly rate of 1.5% in the first three months of 2021, a relatively modest contraction given that the country was in the midst of a strict lockdown to combat a second wave of the coronavirus.

The Office for National Statistics also said Wednesday that the economy even managed to grow by a monthly rate of 2.1% in March when the country began easing some restrictions, notably by reopening schools.

The overall first quarter figures provide further evidence that businesses and consumers have adapted to the constraints of lockdown by increasing their online activities. In the second quarter of 2020, when the first lockdown was in place, the British economy contracted by a fifth. 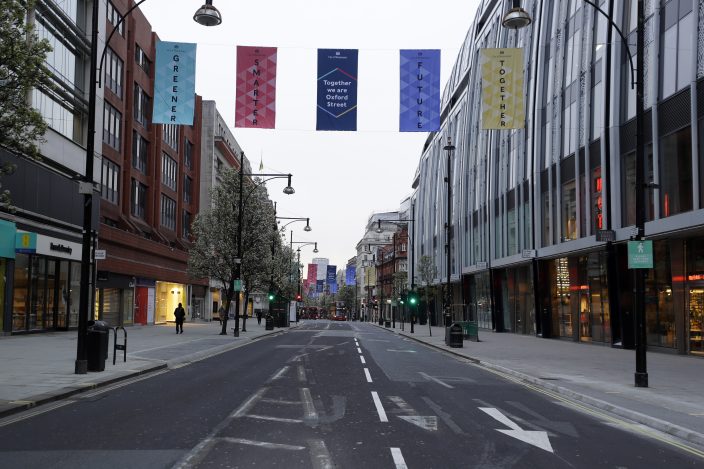 FILE - In this Monday, April 12, 2021 file photo, empty Oxford Street in London before shops open at 7:00am, after coronavirus measures were lifted. The British economy contracted by 1.5% in the first quarter of 2021, a relatively modest contraction given that the country was in the midst of a strict lockdown to combat a second wave of the coronavirus. The Office for National Statistics also said Wednesday May 12, 2021, that the economy even managed to grow by 2.1% in March when the country began easing some restrictions. (AP PhotoKirsty Wigglesworth, File)

The agency said the strong recovery seen in March was led by the retail sector and the return of schools. The construction and manufacturing sectors also did well as businesses continued to adapt to the pandemic.

Treasury chief Rishi Sunak said the March performance is “a promising sign of things to come.”

Despite the March bounceback, the British economy remins 8.7% smaller than it was on the eve of the pandemic. That compares unfavorably with other Group of Seven industrial nations, such as the U.S., which is only 0.9% smaller. France, Germany and Italy, too, have also clawed back more ground.

Hopes are high though that the British economy can recoup more of its pandemic losses over the coming months as restrictions are eased in the wake of sharply lower coronavirus infections and a successful vaccine rollout program. The Bank of England even thinks that the British economy will have recouped all its COVID-related losses by the end of this year.

Since the reopening of schools in early March, the lockdown has been eased further with pubs and restaurants, for example, allowed to serve customers outside and shops selling nonessential items allowed to open their doors again. Over coming weeks, the lockdown will be eased further and life is expected to be more or less normal by the summer subject to there not being another resurgence of the virus.

Separately, the statistics agency also said that exports of goods to the European Union increased in March and are now almost back to where they were in December, the last month that Britain was part of the European single market and customs union.

The new free trade deal between a post-Brexit Britain and the EU came into force at the start of 2021, leading to disruption in trade which the British government said represented some early teething problems.

Though the deal ensured that tariffs and quotas would not be slapped on traded goods, other non-tariff barriers, such as customs checks, came into force. Though exports have seemingly recovered, imports from Europe remained sluggish in the first three months of the year, outstripped by non-EU imports for the first time on record.

Denzel Dumfries made up for an ear ...

Carlos Rodón took a no-hitter into ...