Under Kremlin orders, the U.S. Embassy has stopped employing Russians, forcing the embassy to cut its consular staff by 75% and limit many of its services.

The order went into effect on Wednesday, bringing the sharply deteriorating U.S.-Russia relationship to an intensely personal level.

Because of the cuts, the embassy can offer only very limited services, such as considering “life-and-death” visa applications. That leaves Russian businessmen, exchange students and romantic partners adrift because they won't be able to obtain visas. Even Americans will be unable to register their newborns or renew their passports. 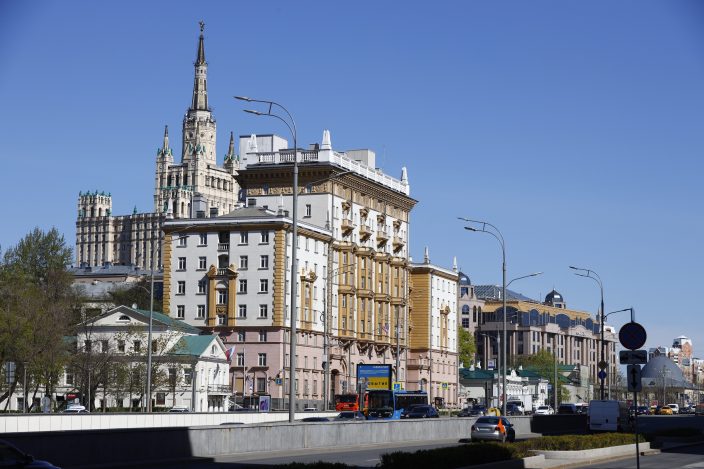 The U.S. Embassy, center, is seen in Moscow, Russia, Tuesday, May 11, 2021. Under Kremlin orders, the U.S. Embassy has stopped employing Russians, leaving Russian businessmen, lovers and exchange students adrift because they can't get visas and American parents unable to register their newborns as citizens.(AP PhotoAlexander Zemlianichenko)

For Anastasia Kuznetsova, a 20-year-old engaged to marry a Californian, it's a crushing blow. She had already spent about two years seeking a fiancee's visa. The notoriously laborious process for Russians to get U.S. visas had already been slowed by COVID-19.

“I felt destroyed, much more depressed than I was before," said Kuznetsova, who last saw her fiance in January on a trip to Mexico. “We have no idea when it’s going to continue working and if we will be able to see each other even during these years.”

Thomas H V Anthony, an American living in Russia, was already frustrated because of a delay in registering the birth of his daughter, a record of the child's claim to U.S. citizenship. 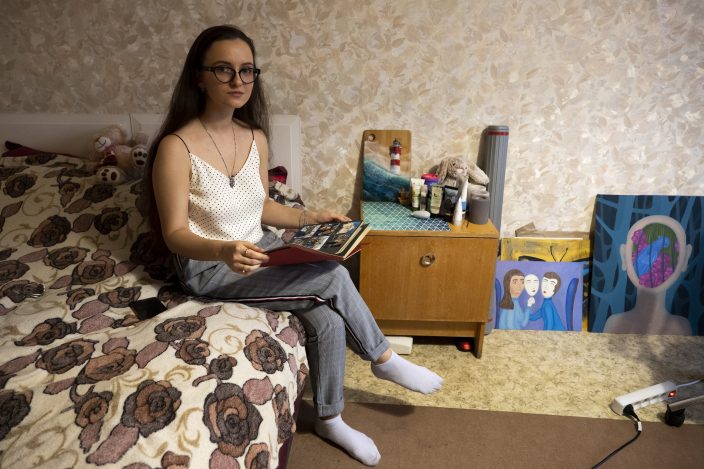 Anastasia Kuznetsova, a 20-year-old fiancée of an American citizen from California, speaks during her interview with the Associated Press in Moscow, Russia, Saturday, May 8, 2021. Like many others in the situation, Anastasia blames big politics for affecting the lives of ordinary people stuck in the middle. Until recently, she had been hoping to celebrate her wedding in the United States this year and had even quit her university in Russia in preparation for the move. (AP PhotoDaniel Kozin)

“My expectation was as things get better with the situation with the pandemic, gradually the consulate would open more and more and more,” he said. “It was a big shock to suddenly get an email from them, about two weeks ago, saying effective on the 11th we will no longer be offering any consular services.”

For Anthony, this means his daughter, who was born before the pandemic, will not be able to travel to visit her grandparents in the United States in the foreseeable future.

The embassy has made no statements on whether it is taking measures to beef up the consular staff with new employees from the United States. 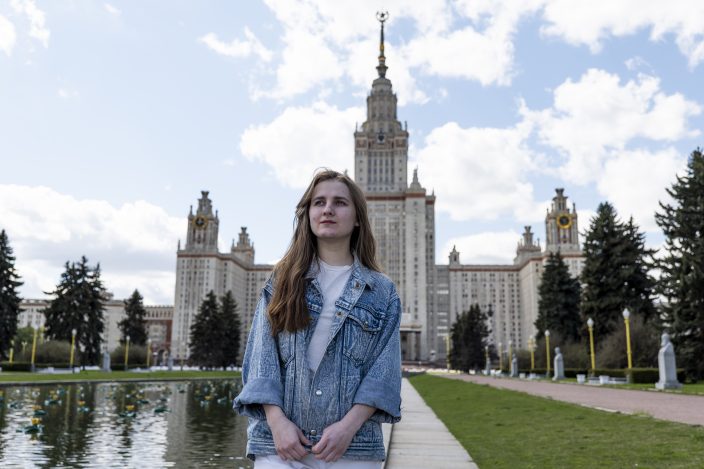 Yulia Kukula stands in front of the Moscow State University during her interview with the Associated Press in Moscow, Russia, Friday, May 7, 2021. Kukula, a university student who was accepted for a PhD program in sustainable energy at Arizona State University, may have found a laborious and costly away around the problem of getting her visa to go the university. (AP PhotoDaniel Kozin)

Embassy spokespeople could not be reached for clarification on how the mission will handle other jobs also filled by locals, such as security.

An order signed last month by President Vladimir Putin called for creating a list of “unfriendly” countries whose missions could be banned from hiring Russians or third-country nationals. The list includes the United Kingdom, Ukraine, Poland and several other European countries, but the United States is the first for which the ban is being enforced.

The move followed U.S. sanctions imposed over Russian interference in the 2020 U.S. presidential election and involvement in the SolarWind hack of federal agencies. Each country expelled 10 of the other's diplomats. 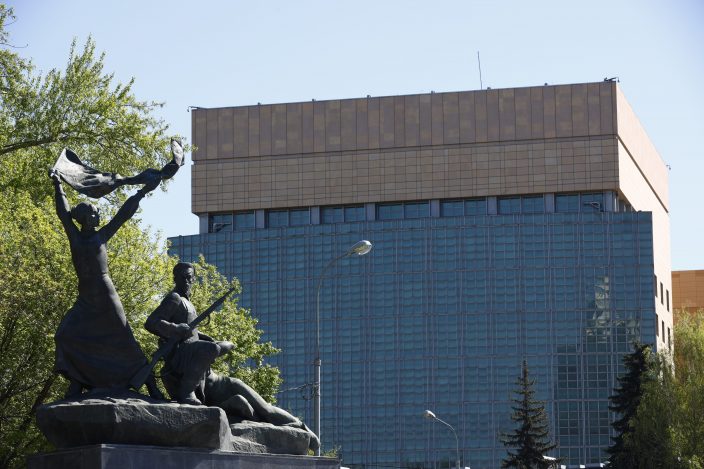 The U.S. Embassy is seen behind a monument to the Revolution workers of 1905 Revolution in Moscow, Russia, Tuesday, May 11, 2021. Under Kremlin orders, the U.S. Embassy has stopped employing Russians, leaving Russian businessmen, lovers and exchange students adrift because they can't get visas and American parents unable to register their newborns as citizens. (AP PhotoAlexander Zemlianichenko)

Foreign Minister Sergey Lavrov said the ban on local employees is in line with convention.

“We rarely employ any local personnel in the country where our diplomatic mission is. And thus we have the full right to transfer this practice onto the regulations which manage the work of the U.S. Embassy and their general consulate in the Russian Federation," he said last month.

Yulia Kukula, a university student who was accepted for a PhD program in sustainable energy at Arizona State University, may have found a laborious and costly way around the problem of getting her visa to attend university. 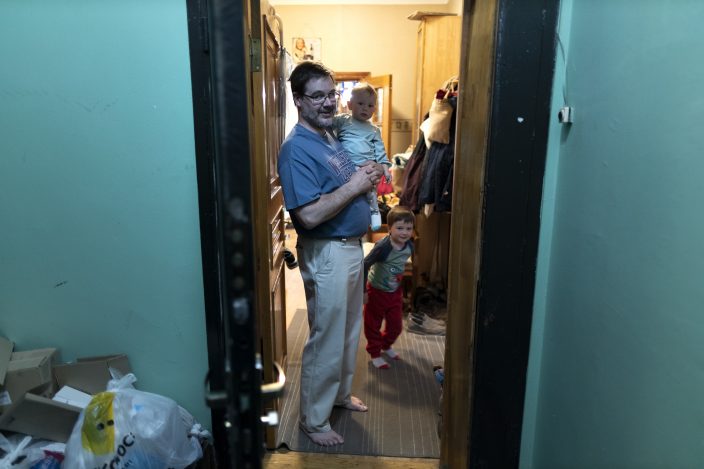 Thomas H V Anthony poses for a photo after his interview with the Associated Press holding his daughter Katerina as his son Andrey stands next at their flat door in Moscow, Russia, Monday, May 10, 2021. "My expectation was as things get better with the situation with the pandemic, gradually the consulate would open more and more and more," said Thomas H V Anthony, a U.S. citizen living in Russia with a baby daughter who has not yet received a U.S. passport. (AP PhotoAlexander Zemlianichenko)

After searching online for advice from others in her situation, Kukula was able to sign up for an interview for a visa at the U.S. consulate in neighboring Kazakhstan. But that's a 2,300-kilometer (1,400-mile) trip from Moscow, and the interview isn't until October.

The United States once had three other consulates in Russia — in Yekaterinburg, Vladivostok and St. Petersburg — which somewhat eased the travel burden for people seeking visas. But those consulates have closed or stopped providing visas amid diplomatic spats in recent years, in what Alexis Rodzianko, head of the American Chamber of Commerce in Russia, called “a visa war.”

That had already placed a burden on the companies in his chamber whose executives needed to travel. “Now it looks like it's impossible for the indefinite future,” he said. 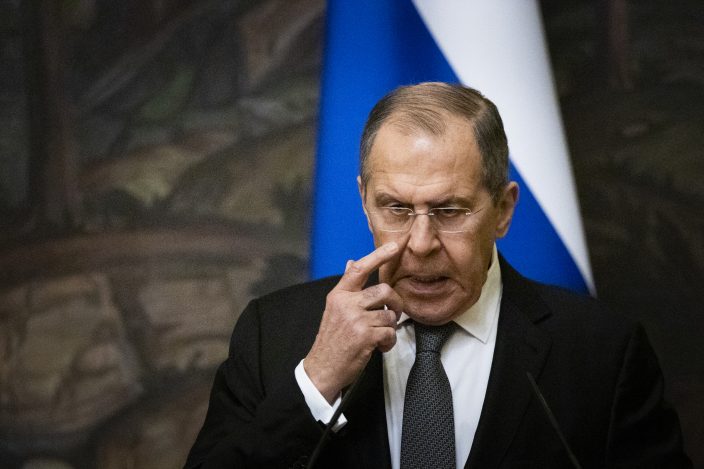 FILE - In this Wednesday, May 5, 2021 file photo, Russian Foreign Minister Sergey Lavrov gestures during a joint news conference with Palestinian Foreign Minister Riyad Al-Maliki following their talks in Moscow, Russia. The U.S. Embassy in Moscow sharply limited consular services starting Wednesday, May 12 following a Russian ban on hiring local staff, leaving many U.S. citizens and Russian visa seekers in limbo. "We warned them a long time ago that we, as well, will transfer our own practice on to the relations between countries in the sphere of operations of diplomatic missions," said Russian Foreign Minister Sergei Lavrov late last month about the new restrictions for the U.S. embassy. (AP PhotoAlexander Zemlianichenko, Pool, File)

The travel restrictions of the pandemic have shown that videoconferencing can't entirely replace the in-person contact of business travel, he said.

He also sees a larger problem if the visa halt lasts for long. 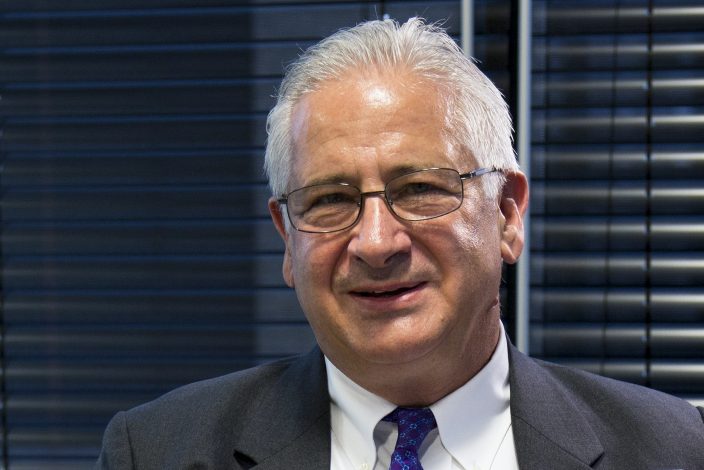 FILE - In this file photo taken on Monday, Oct. 23, 2017, Alexis Rodzianko, the president of the American Chamber of Commerce in Russia, smiles during an interview with The Associated Press. "This is an ongoing, what they call a visa war. Well now the visa war has been expanded to the general population," said Alexis Rodzianko. (AP PhotoAlexander Zemlianichenko, File)

He worries that because the U.S. and Russian governments are adversaries, a lack of contacts between people on both sides could lead to “dehumanization,” adding, “which is very dangerous because that's what you need to fight a war.”

Kuznetsova, who had hoped to celebrate her wedding in the United States this year and had even quit her university in Russia in preparation for the move, feels trapped as a small piece in a large geopolitical dispute.

“I understand that there can be problems between countries, it’s normal, it’s happened throughout all of history, but it’s not normal to divide people and separate them, especially when it’s families and the lives of people,” she said.