Netherlands defender Virgil van Dijk ruled himself out of the European Championship on Wednesday, saying he wanted to use the offseason to complete his rehabilitation from a serious knee injury.

The Liverpool center back has been out since October after he damaged his anterior cruciate ligaments in a challenge by Everton goalkeeper Jordan Pickford in a Premier League game.

“I feel physically it is the right decision that I’ve decided not to go to the Euros and to go into my last phase of rehab during the offseason," Van Dijk said in an interview with Liverpool's website. 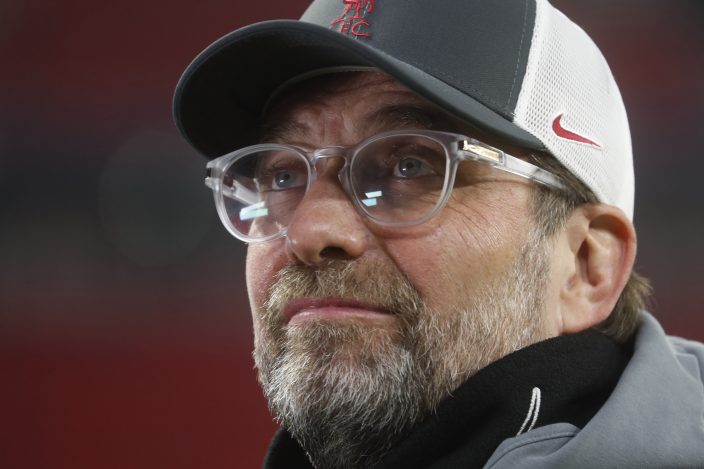 FILE - In this file photo dated Wednesday, March 10, 2021, Liverpool's manager Jurgen Klopp ahead of the Champions League round of 16 second leg soccer match against Leipzig at the Puskas Arena stadium in Budapest, Hungary. Liverpool manager Jurgen Klopp on Saturday May 1, 2021, dampened hopes of Virgil van Dijk playing for the Netherlands at the European Championship, saying it will be “very, very tight” whether the defender can be fit in time because he’s not close to resuming full training. (AP PhotoLaszlo Balogh, FILE)

“So, the full focus will be on preseason with the club and that’s a realistic goal, so I am looking forward to that. Obviously I am very gutted to miss the Euros, to miss the European Championship and leading out my own country there, but things have been like they have and I have to accept it.”

Van Dijk said he is looking at the bigger picture, including helping the Netherlands qualify for next year's World Cup in Qatar.

“I am quite mature and I know by now what could be a good decision,” he said, “and I think this decision has definitely been the right one, in my opinion, to give my body and my knee a little bit more extra time to get ready for hopefully a big, big 18 months at least with the club but also with my country because we’re trying to go to the next tournament after this as well and that starts in September.”

Van Dijk said he is on schedule to take part in preseason training with Liverpool.