The three scientists credited with helping save lives ahead of a recent explosive volcano eruption in the eastern Caribbean island of St. Vincent are known to locals simply as Richie, Rod and TC.

The team huddled indoors for weeks on little sleep to study and alert the government about activity at La Soufrière, whose eruptions last month displaced nearly 20% of the population and prompted the United Nations to seek $29 million to help the island recover from the devastation.

More than 16,000 people fled the ash-covered hills and homes in northern St. Vincent while the scientists stayed behind. They filed two reports a day and worked in shifts to keep a constant eye on the temperamental volcano as ash kept falling from the sky, blanketing the island’s lush green environment in monotone gray. 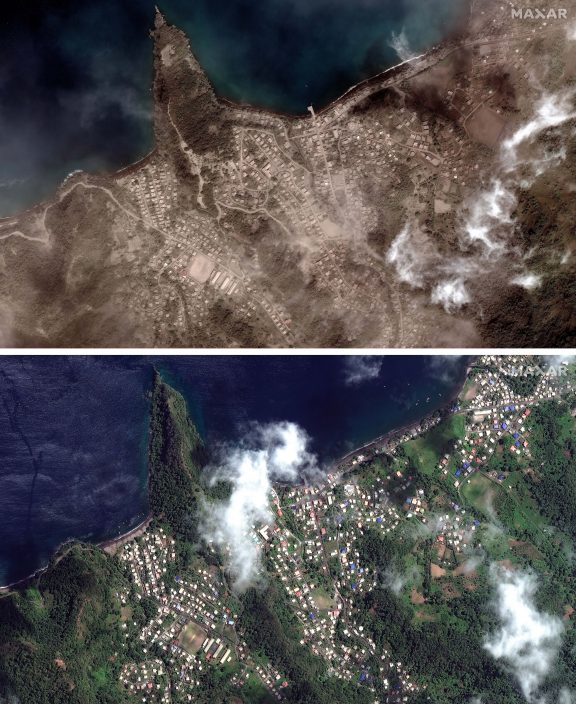 FILE - This file combo of two file photos shows images provided by Maxar Technologies shows, top, the Richmond Vale waterfront covered in volcanic ash in Chateaubelair, St. Vincent, on April 13, 2021, and below, a day after an earlier eruption at the Richmond Vale waterfront on April 2, 2021. Continuous eruptions displaced nearly 20% of the population and prompted the United Nations to seek $29 million to help the island recover from the devastation. (Satellite image ©2021 Maxar Technologies via AP, File)

“You get kind of used to having ash in your food, in your hair, in your nose. You sleep in a fine layer of ash. It gets very uncomfortable,” said Richard Robertson, a geologist and volcanologist with the University of the West Indies’ Seismic Research Center who oversaw the team in St. Vincent.

The observatory, built about 6 miles from La Soufrière, was located close enough to the volcano to give scientists a full view of it but far enough so that they remained out of danger. It is divided in two: the air-conditioned office where all data including recordings from a seismometer were analyzed and compiled and a room also sealed off from ash that lacked air conditioning and served as the bedroom for all three.

Like many of those affected by the eruptions, the scientists ate a lot of dried and canned goods, although people would drop off donations including fresh fruit, homemade smoothies and even a lasagna from the wife of Prime Minister Ralph Gonsalves, while local residents came by with buckets of water when the team lacked running water for about a week. 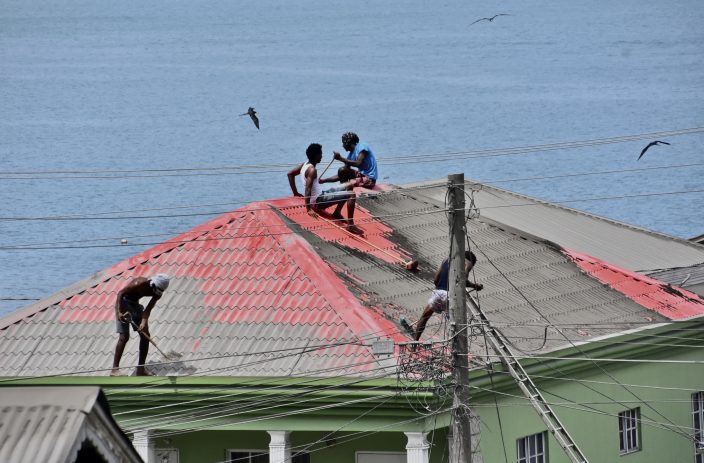 FILE - In this April 12, 2021 file photo, people clean volcanic ash from the red roof of a home after La Soufriere volcano erupted in Wallilabou on the western side of the Caribbean island of St. Vincent. Continuous eruptions displaced nearly 20% of the population and prompted the United Nations to seek $29 million to help the island recover from the devastation. (AP PhotoOrvil Samuel, File)

“There were two days in which we were a bit smelly,” Robertson said with a laugh. “It was an intense period. We were focused on what we were doing, so we didn’t notice as much.”

A minor eruption in December allowed scientists to set up monitoring stations that helped them collect enough data to recommend evacuations less than a day before the April 9 explosive eruption that shot a plume of ash 32,000 feet (10 kilometers) into the sky as lightning crackled through it.

No deaths or injuries were reported as eruptions continued on St. Vincent and the Grenadines, an island chain of more than 100,000 people, thanks partly to the life-saving evacuation order based on data collected by Roderick Stewart, a volcanologist and seismologist who goes by “Rock Star” since he shares names with British singer Rod Stewart, although not his vocal ability.

He said recommending the government evacuate the area was an easy decision given the rapid changes in seismic activity.

“I’ve seen wrong warnings and hesitancy,” Stewart said. “In this situation, it was actually the other way around. ... We came to this sort of feeling that we would not be happy going into the night if there wasn’t an evacuation, and that things could change quickly.”

On the afternoon of April 8, the government ordered all those living close to the volcano to evacuate. Thousands of people grabbed whatever belongings they could fit into suitcases, backpacks or plastic bags and headed to government shelters or the homes of friends or family.

Some people, however, refused to leave their homes, worrying Robertson, Stewart and their colleague, Thomas Christopher. They knew people could die for insisting on staying or returning to their homes like they did in nearby Montserrat, where the Soufrière Hills volcano has erupted continuously since 1995, destroying the capital of Plymouth and killing at least 19 people in 1997.

Both Robertson and Stewart said they force themselves to not think about what impact their decisions might have on people.

“You try to focus on what the volcano is doing and less on what the implication is for people,” Robertson said. “If you don’t do that, you’re not going to be doing as good a job as you could.”

A native Vincentian, Robertson recalled the previous eruption of La Soufrière in 1979. He was around 18 years old and helped evacuate people, managed a shelter for two weeks and even provided entertainment to those displaced, playing tenor pan in a steel band at shelters. At the time, he was considering studying physical planning and geography, but the eruption led him to become a geologist and volcanologist.

The team he led during the most recent eruption has since disbanded and gone back to their home base, but not before the scientists praised the director of the seismic research center, Erouscilla Joseph, in a blog: “No man is an island, so it makes sense that our director, Dr. Joseph, is a woman adept at rallying the troops.”

The scientists are still in touch online as they continue to monitor La Soufriere.

“We are currently discussing, ‘Is the eruption finished?’” said Stewart, adding that while scientists expect it to go quiet in upcoming months, it’s not guaranteed. “Volcanoes in their nature are unpredictable.”