Raab also pledged 22 million pounds ($31 million) in support to “vulnerable” countries in Africa and the Indo-Pacific to improve their digital defense capacity.

He said Britain and the West must step up on cybersecurity or face the “multilateral vacuum” being filled by China and Russia. 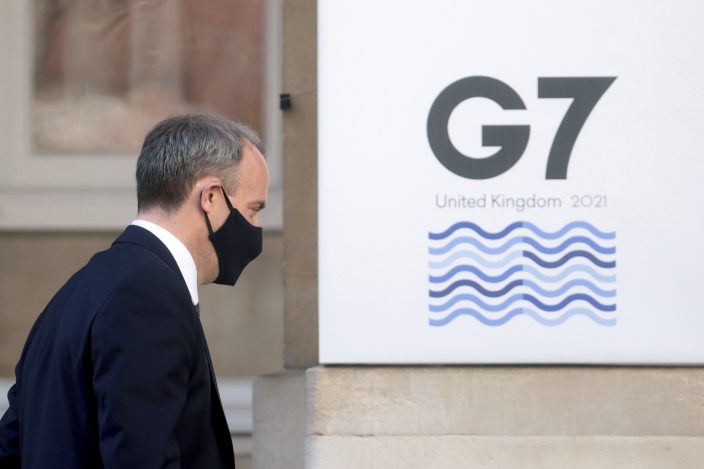 Britain's Foreign Secretary Dominic Raab arrives for a G7 foreign ministers' meeting, at Lancaster House in London, Britain, Wednesday, May 5, 2021. Diplomats from the group of wealthy nations are meeting in London for their first face-to-face gathering in two years. (Hannah McKayPool Photo via AP)

“We need the combination of resilient defenses but also offensive capabilities, and the global diplomatic clout which comes with being a modern cyberpower,” Raab said in a speech at a National Cyber Security Centre conference in London.

He said the funding would go to national cyber response teams, awareness campaigns and an Interpol operations hub in Africa.

The foreign secretary accused Moscow and Beijing of being among the “authoritarian regimes” failing to take action against cyberattacks coming from their own soil.

He said elections had become a “prime target” for interference, with the aim of destabilizing democratic states.

The Biden administration last month announced sanctions against Russia and expelled diplomats over a massive hacking campaign which targeted federal agencies, known as the SolarWinds breach, as well as for vote meddling.

Russia, which denied involvement in the breach, responded in kind against what it called unprovoked action.

China in April denied links to work by hackers to spy for months on dozens of high-value government, defense industry and financial sector targets in the U.S. and Europe through Pulse Connect Secure devices.

Raab also highlighted attacks on COVID-19 vaccine research programs and supply chains in the U.K., as well as universities, schools and hospitals. “It seems that almost nothing is off limits for cyber criminals,” he said.

Raab had met with Group of 7 foreign ministers in London earlier this month, with security high on the agenda.

Top diplomats from Australia, India, South Africa and South Korea had also been invited, with Raab saying gaining the trust of “like-minded” countries was “essential”.