Michael Bradley had a goal and an assist, Jozy Altidore also scored and Toronto FC beat the Columbus Crew 2-0 on Wednesday night for Chris Armas’ first victory with the Reds.

Toronto (1-2-1) has lost just once in its last 10 matches against Columbus, going 6-1-3. Defending champion Columbus (1-0-3) had its eight-game unbeaten streak snapped.

Bradley capitalized on a failed clearance in the 13th minute for his first goal since Sept. 7, 2019. Toronto nearly went ahead 2-0 in the 26th, but Nick DeLeon’s shot hit the crossbar and Yeferson Soteldo’s empty-net attempt was denied by defender Saad Abdul-Salaam. 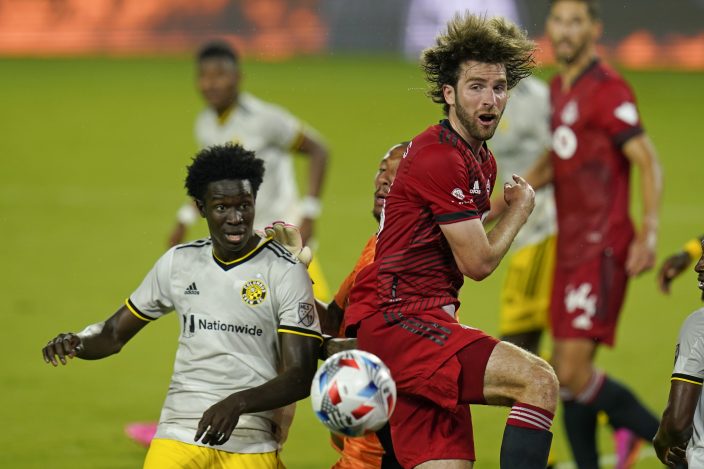 Toronto FC forward Patrick Mullins, front right, tries but misses a head ball to the goal off a corner kick as Columbus Crew defender Aboubacar Keita, left, looks on during the second half of an MLS soccer match, Wednesday, May 12, 2021, in Orlando, Fla. (AP PhotoJohn Raoux)

Altidore entered as a substitute in the 62nd minute. He hit the crossbar in the 75th and headed home a goal 12 minutes later.

Kacper Przybylko scored in the 88th minute to give Philadelphia the tie with New England Revolution 1-1 on Wednesday night.

Teal Bunbury, a substitute in the 68th minute, had a sliding finish of DeJuan Jones’ pass to open the scoring for New England (2-1-2) in the 85th. Three minutes later, Przybylko tied it on a header in traffic.