The ban is effective from Thursday night until Monday morning. It does not apply to people engaged in essential services such as health, food supply and power. Those going to the airport for air travel or seeking medical treatment will also be allowed on the roads.

“All others are banned from leaving their houses and traveling on the roads,” said Gen. Shavendra Silva, the army commander and head of the National Operation Center for Prevention of COVID-19 Outbreak. 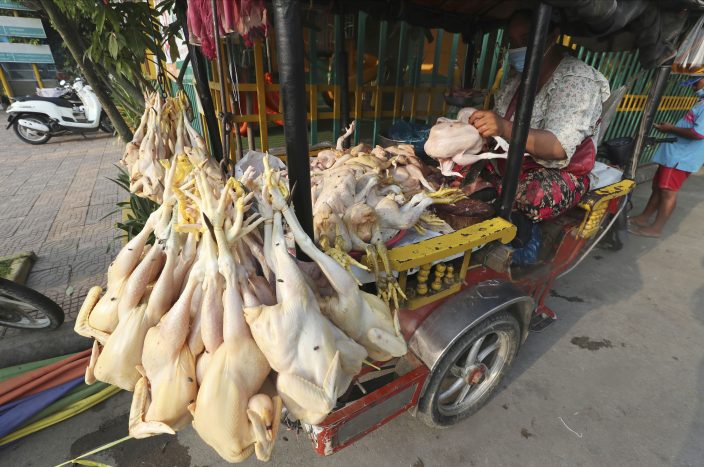 A vendor sells chickens along a street in Phnom Penh, Cambodia, Thursday, May 13, 2021. Cambodia is battling a surge of COVID-19 cases, so there are restrictions in Phnom Penh that close many food markets and shops, giving more mobile street vendors an opportunity to do business, even if they have to dodge police in areas where they may be breaking the law. (AP PhotoHeng Sinith)

Health officials are grappling with a surge in cases since last month. The country has already banned public gatherings and parties, and has closed schools and restricted public transport.

Officials warn that cases could rise further in the next two weeks because of celebrations and shopping by people last month to mark the traditional new year.

The health ministry has confirmed 131,098 cases, including 850 fatalities. 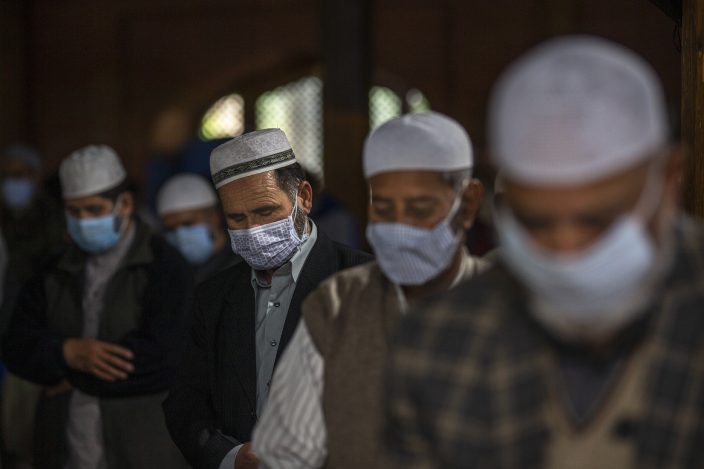 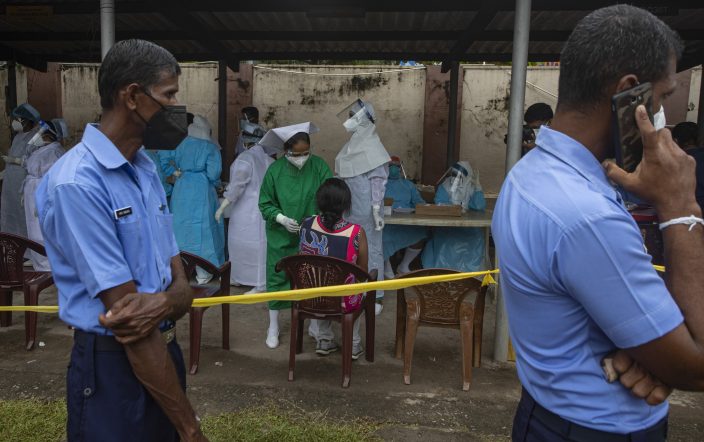 A Sri Lankan health worker administers a jab of Sinopharm vaccine against COVID-19 to a woman as navy sailors queue up for their turn in Colombo, Sri Lanka, Thursday, May 13, 2021. (AP PhotoEranga Jayawardena) 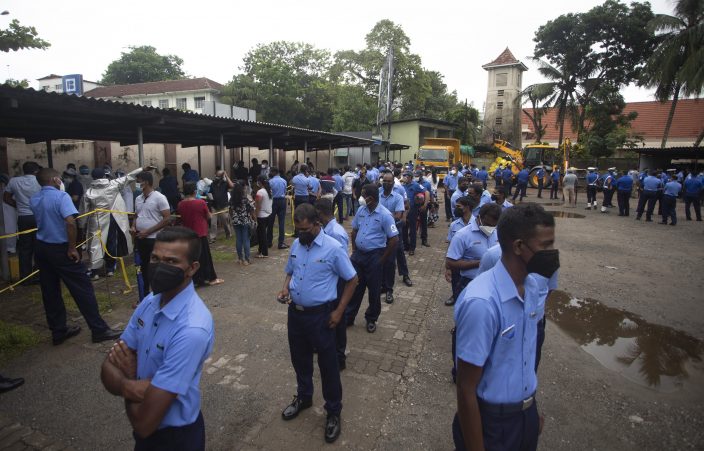 Traditionally, around 100,000 people come for the two Masses at the small rural town’s huge shrine on the night of May 12 and morning of May 13, though last year it remained closed due to the COVID-19 pandemic.

The capacity was quickly reached on both Wednesday and Thursday, leaving hundreds outside the shrine’s gates, which were guarded by police. 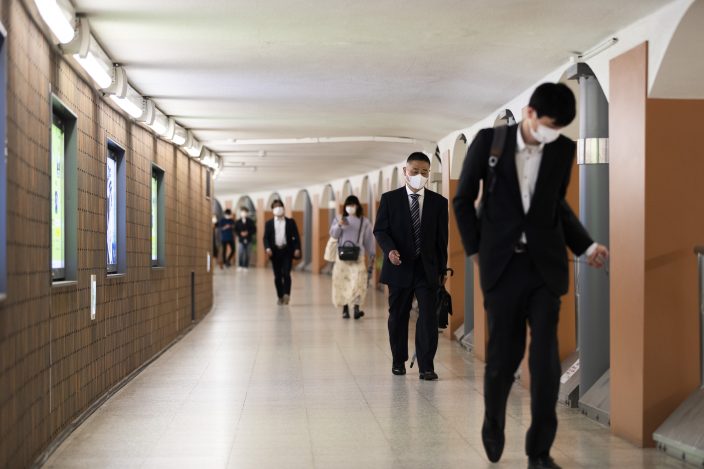 Like the shrine at Lourdes, France, Fatima draws millions of pilgrims from around the world every year to give thanks to Our Lady of Fatima, or to pray for help.

Portuguese Cardinal José Tolentino Mendonça presided over the ceremonies and told the faithful he hoped that the suffering over the past year of the pandemic “can help to make us better: more spiritual, more human and more fraternal.”

MULTAN, Pakistan —Pakistan’s foreign minister is warning that the next two months are very crucial for the country's coronavirus outbreak and that people must continue observing social distancing. 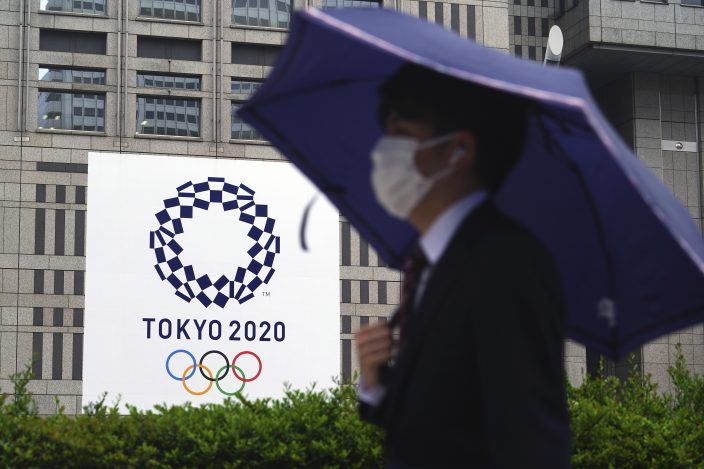 A man wearing a protective mask to help curb the spread of the coronavirus walks in the rain past a banner of Tokyo 2020 Olympic Games Thursday, May 13, 2021, in Tokyo. The Japanese capital confirmed more than 1,000 new coronavirus cases on Thursday. (AP PhotoEugene Hoshiko)

Shah Mahmood Qureshi made the comments Thursday after Eid al-Fitr prayers in the city of Multan.

He noted that the COVID-19 situation is very bad in neighboring India, where record numbers of infections were reported in recent weeks.

He said Pakistan has had a decline in cases since last month, when troops were deployed to force people to adhere to social distancing rules.

Qureshi praised troops and police for playing a key role along with health workers in combatting the coronavirus.

Although some worshippers were carefully spaced one meter (three feet) apart, most violated social distancing rules.

NEW ORLEANS — Children as young as 12 can expect to start getting Pfizer’s coronavirus vaccine Thursday in Louisiana.

The state health officer made the announcement Wednesday after federal advisers endorsed the vaccine for children aged 12 to 15. Dr. Joseph Kanter said that “we are very excited about the opportunity to protect additional age groups and their families with this highly safe and effective vaccine.”

Kanter says the health department expects to release its formal notice Thursday morning and any clinic or other outlet that has Pfizer vaccine can start giving it to kids 12 and up immediately after that.

More than 1,500 clinics, hospitals and pharmacies in Louisiana have the Pfizer vaccine. It is the only coronavirus vaccine approved by the U.S. Food and Drug Administration for people this young.

CANBERRA, Australia -- Australia has reached a supply agreement for 25 million doses of the Moderna coronavirus vaccine.

The vaccines have yet to be approved by the Australian regulator, the Therapeutic Goods Administration. Pfizer and AstraZeneca are the only coronavirus vaccines approved for use in Australia so far.

Prime Minister Scott Morrison says he expects the first Moderna vaccines to arrive in Australia in the last three months of 2021.

ANNAPOLIS, Md. — Maryland is allowing all Indoor and outdoor venues to resume normal operations this weekend.

Gov. Larry Hogan Hogan says the remaining capacity and distancing restrictions for the COVID-19 pandemic will be lifted on indoor and outdoor dining Saturday.

Hogan says the restrictions also will end for all other indoor entertainment venues and conventions and for outdoor entertainment, art and sports venues, though the mandate for mask use remains in place.

The governor said Wednesday that the state’s indoor mask mandate will be lifted when 70% of Maryland adults receive at least one dose of a coronavirus vaccine. As of Tuesday, the state had 65.4% vaccinated.

The governor says that “our plan is to get everything back to normal by Memorial Day.”

NEW YORK—U.S. health advisers have endorsed use of Pfizer’s COVID-19 vaccine in kids as young as 12.

The Food and Drug Administration earlier in the week cleared the expanded use of Pfizer’s shots, citing evidence the shots worked as well in those 12 to 15 years old as those 16 and older.

Kids in some places are already rolling up their sleeves.

But much of the nation was waiting for Wednesday’s recommendations from advisers to the Centers for Disease Control and Prevention. Many states will be shipping doses to pediatricians and even to schools.

Pfizer is not the only company seeking to lower the age limit for its vaccine. Moderna recently said preliminary results from its study in 12- to 17-year-olds show strong protection and no serious side effects, data the FDA will need to scrutinize.

TOPEKA, Kan.—Gov. Laura Kelly says Kansas state government offices will return to normal operations in mid-June after more than a year of having many employees work remotely because of the coronavirus pandemic.

Kelly said Wednesday that state employees and visitors to their offices still will be required to wear masks and maintain social distancing. She says agency directors can allow people to work from home, particularly when social distancing is not possible.

The changes take effect the week of June 13, which means Monday, June 14 for most workers.

Utah is the latest of several states ending the $300 weekly federal benefit paid on top of state benefits.

Gov. Spencer Cox said Wednesday that those extra federal benefits will end in Utah on June 26.

About 28,000 Utah residents are receiving the $300 benefit, and $12.4 million is being paid out by the federal government each week.

Utah has one of the nation’s lowest unemployment rates of 2.9%. The Department of Workforce Services says there are at least 50,000 job openings in the state.

HONOLULU—A former CEO of a Hawaii company accused of defrauding banks of money meant to assist businesses affected by the coronavirus pandemic is pleading not guilty.

A spokeswoman says he stepped down in November.

Authorities say he defrauded banks of more than $12.8 million through the Paycheck Protection Program. According to an indictment, Kao transferred more than $2 million into his own personal accounts.

Congress authorized the program to provide emergency financial assistance through forgivable loans to small businesses for job retention and other expenses.

Defense attorney Michael Green entered the not guilty plea during a brief arraignment via telephone Wednesday.

Trial is scheduled for July. Green says he anticipates the trial will be postponed because the case involves thousands of pages of discovery.

LAS VEGAS -- The Las Vegas area has been added to places in Nevada where authorities have detected cases of a potentially worrisome strain of the coronavirus found in India.

The Southern Nevada Health District reported Tuesday that a woman in her 20s who had not traveled recently and was not vaccinated against COVID-19 tested positive for the variant subtype. She didn’t require hospitalization.

A district spokeswoman said Wednesday there were no additional cases to report.

Eight other cases of the Indian variant were previously identified in northern Nevada, including four confirmed last week in the Reno area.

SACRAMENTO, Calif. -- California Gov. Gavin Newsom says the state will not require people to wear masks in almost all circumstances after June 15.

Newsom announced last month the state would lift nearly all of its coronavirus restrictions on June 15 if the state’s case numbers continued to improve. But at the time, Newsom said the mask mandate would stay.

On Tuesday, Newsom said there would be “no mandates” for wearing masks, except for large indoor gatherings where people “from around the world” are mingling. California has required people to wear masks in public places since June 18, 2020.

ATLANTA — Dozens of school districts around the country have eliminated requirements for students to wear masks, and many more are likely to ditch them before the next academic year.

Where many see a continued need to protect children and teachers who aren’t vaccinated against COVID-19, opponents argue that masks make students uncomfortable and mandates impinge on freedom.

At some school board meetings, there’s been emotional and highly divisive debates. Most public health experts say it’s too early to relax mask rules since few children are vaccinated and they spend hours indoors at school.

Even as some U.S. schools remain closed to minimize infections, districts in states from Alabama to Wyoming decided to ditch student mask mandates. The Centers for Disease Control and Prevention’s guidance says schools “should prioritize universal and correct use of masks and physical distancing.”

Cuomo says the state’s vaccine advisory task force and state health commissioner will have to review safety data and decide whether to recommend the vaccine. It’s unclear when exactly New York’s task force will make its decision.

But Cuomo says, “we could have full authorization for vaccinations to begin for 12 to 15 year olds here in New York as early as Thursday.”

In California, Nevada, Oregon and Washington, the Western States Scientific Safety Review Workgroup is reviewing the U.S. Food and Drug Administration’s emergency use authorization for children ages 12 to 15. It’s expected to make its decision Wednesday.

NEW YORK — Deaths from the coronavirus in the U.S. have tumbled to an average of about 600 per day, the lowest level in 10 months.

In more than half the states, the number of lives lost per day has dropped to single digits on average and hit zero on some days. Kansas reported no new deaths Friday through Monday. Massachusetts recently had a day of no reported deaths.

Dr. Amesh Adalja, an infectious disease specialist at Johns Hopkins University, says vaccinations have been crucial even as the nation struggles to reach herd immunity.

Confirmed infections have fallen to about 38,000 daily on average, the lowest mark since mid-September. They have plummeted 85% from a peak of more than a quarter-million cases per day in early January.

The last time deaths were this low was early July. The coronavirus deaths in the U.S. topped out in mid-January at an average of more than 3,400 a day, just a month into the biggest vaccination drive in the nation’s history.

Home field not an advantage for Spain so far at Euro 20 ...

The Latest: Indian state revises death count up by 70%

The Latest: WHO warns delta variant 'to take hold' in Europe

The Latest: Indian daily cases dip below 100K after 2 months