Rory McIlroy knows as well as anyone how quickly fortunes can change in golf.

Until winning at his happy hunting ground of Quail Hollow last week, McIlroy had gone 18 months without winning anywhere, the second-longest dry spell of his career. Now he's the betting favorite for the PGA Championship, which starts next Thursday at Kiawah Island.

It's not much different from nine years ago, the last time the PGA Championship went to the South Carolina shores of Kiawah Island. 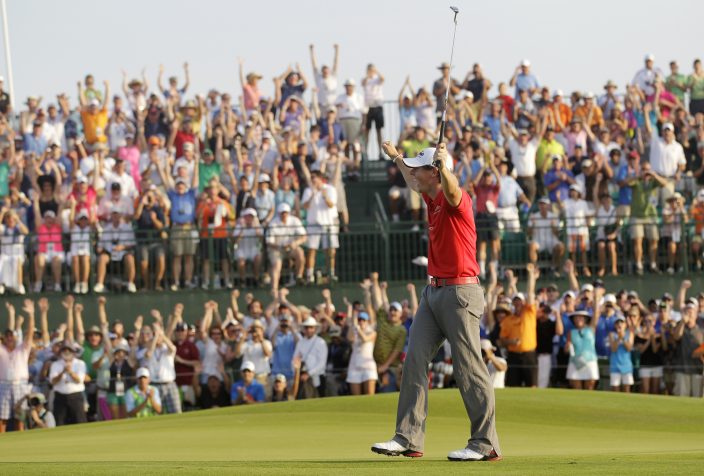 FILE - Rory McIlroy of Northern Ireland reacts to his victory on the 18th green in the final round of the PGA Championship golf tournament on the Ocean Course of the Kiawah Island Golf Resort in Kiawah Island, S.C., in this Sunday, Aug. 12, 2012, file photo. The PGA is limiting attendance at Kiawah this year to 10,000 fans a day. (AP PhotoJohn Raoux, File)

McIlroy was practically an afterthought. In the three months leading up to the final major of 2012, he had missed the cut in four of the eight tournaments he played worldwide and didn't seriously contend in the other four. His best finish in a major that year was a tie for 40th at the Masters.

And then over four days, the bounce in his step returned, his short game was exquisite and he set the PGA Championship record with an eight-shot victory. He finished the rest of the year by winning three more times and meeting the PGA of America employee who would become his wife. It was a good year.

Is this the start of another big run? 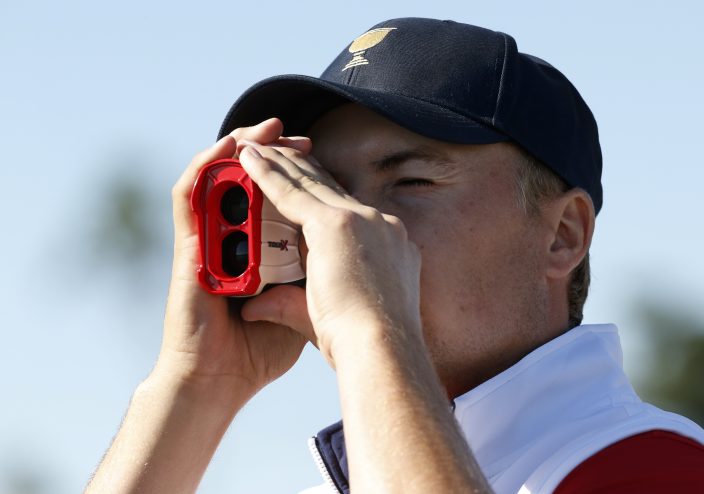 FILE - Jordan Spieth looks through a range finder following his four ball match at the Presidents Cup golf tournament at the Jack Nicklaus Golf Club Korea, in Incheon, South Korea, in this Friday, Oct. 9, 2015, file photo. Players will be allowed to use the measuring devices at the PGA Championship next week, the first time that's been allowed at a major. (AP PhotoLee Jin-man, File)

Perhaps the better question is who's next?

Going into the second major of 2021, it's hard to find anyone else in top form. Justin Thomas has an ice cold putter. Bryson DeChambeau was another flop at the Masters, and while his tee shots still go far, he's not always sure which direction.

Brooks Koepka will have played only twice in three months because of another knee injury. Dustin Johnson, who withdrew from his final tuneup, has gone three months without a top-10 finish. Has anyone seen Xander Schauffele and Patrick Cantlay on a late Sunday afternoon when they weren't partners? Cantlay has missed three straight cuts on his own ball for the first time in his career. 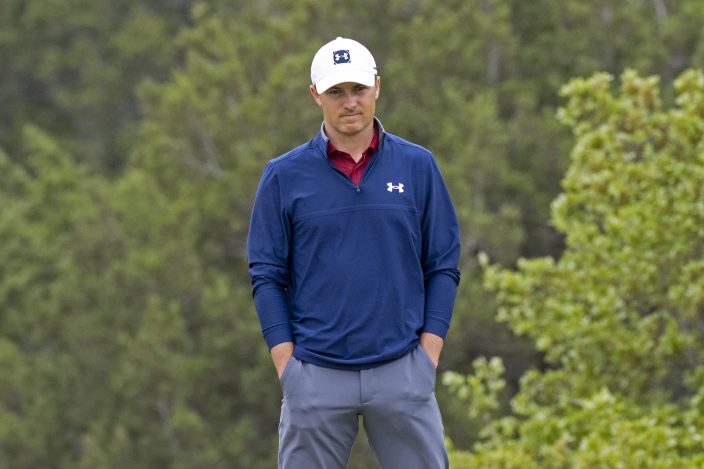 FILE - Jordan Spieth waits his turn to putt during the third round of the Valero Texas Open golf tournament in San Antonio, in this Saturday, April 3, 2021, file photo. Spieth will try to complete the career Grand Slam next week at the PGA Championship. (AP PhotoMichael Thomas, File)

Only two players — Thomas at No. 3 and defending PGA champion Collin Morikawa at No. 6 — were in the top 10 when they won PGA Tour events this year.

That can all change with a moment's notice, of course.

“It’s happened to me,” McIlroy said. “I hadn’t sniffed a weekend of a golf tournament for a couple of months. I guess it turned around quickly. But there’s a lot of work in between to get to that point. I think once you see progress and you get that little spark of confidence, then things can start to move pretty quickly.” 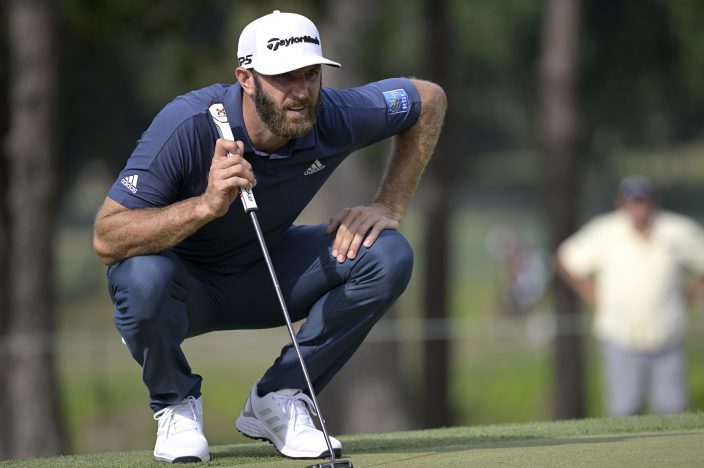 FILE - Dustin Johnson lines up a putt on the sixth green during the final round of the Valspar Championship golf tournament in Palm Harbor, Fla., in this Sunday, May 2, 2021, file photo. Johnson is among several top players who have not played well going into the PGA Championship next week at Kiawah Island. (AP PhotoPhelan M. Ebenhack, File)

One player who would seem to have some momentum is Masters champion Hideki Matsuyama, except that he took his green jacket home to Japan where he quarantined for two weeks. There wasn't much to do except read Japanese newspapers about his Masters victory, which is more than he'd ever read about himself.

“I'm not used to all that attention,” he said, “but grateful that people took notice.”

Another player is Spieth, who has reason to get plenty of attention at Kiawah Island. 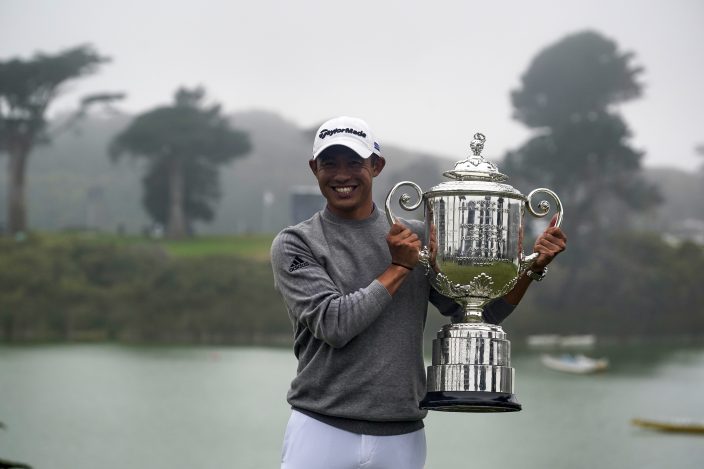 Spieth had not won since the 2017 British Open and was on the verge of falling out of the top 100 in the world when he missed the cut in his first start of the year. Then, he played in the final group the next two weeks. He contended at Bay Hill and then he capped off his return by winning the Texas Open, followed by a tie for third at Augusta National.

But then he tested positive for COVID-19 during a two-week break that turned into four weeks. He returned at the AT&T Byron Nelson hopeful of knocking off some rust he didn't initially expect to be there.

At stake for Spieth is another chance — his fifth and possibly his best — to win the PGA Championship for the final piece of the career Grand Slam. Only five others have won all four majors, most recently Tiger Woods in 2000. No one has completed it at the PGA Championship.

“The first time was really the only time where it may have weighed on me, only given it was coming right off a major win (the British Open for the third leg) and then I was playing really well. So I felt in form. And then the years after, I just didn't really feel in great form in PGAs," Spieth said.

“Every year I go into that tournament, it's the one that if I could pick one more to win, I would pick that one.”

Equally mysterious in some respects is Kiawah Island. The Ocean Course will be the longest in major championship history — 7,838 yards at sea level — and the world's best have really seen it only once.

McIlroy hasn't been back since he won, unaware that the tree on No. 3 where his tee shot lodged in the third round had to be removed because of disease. It was replaced two years ago with what now is called “Rory's tree.”

Jon Rahm is expecting wind to change direction during the week. DeChambeau recalls watching McIlroy win in 2012 and what stood out is the length.

“I think it's one of the longest championships we've ever played,” DeChambeau said. “And I'm excited for that, because any time it's a super long golf course I think it fits into my hand quite nicely.”

And if DeChambeau or anyone else gets off the straight and narrow, he will have some additional help. For the first time in any major, the PGA Championship is allowing measuring devices — more commonly known as rangefinders — a decision that has been received with mixed reviews.

Thomas hates the idea. He says that's what a good caddie is for. Spieth forgot they were allowed and said he might use them as confirmation if needed. Most players say the only time it will help speed play is if a player gets out of position and can laser the flag or wherever he's trying to go.

Morikawa, meanwhile — another player who hasn't seriously contended in two months — will try to join Koepka and Woods as the only repeat winners in stroke play. Morikawa won last year at Harding Park with that famous drive to 7 feet for eagle on the par-4 16th in the final round. That carried him to a two-shot victory over Johnson and Paul Casey.

For Johnson, it was his second straight runner-up finish. The way he's been going, that might feel like progress.

One theme that has come up in recent weeks is that players who seem to be struggling are never as far away as it might seem. Just ask McIlroy — now or in 2012 at Kiawah.

Day trying to regain form, knowledge of Kiawah ahead of PGA