Tyson Jost scored two of Colorado’s five second-period goals and the Avalanche clinched the West Division and the top overall seed in the NHL playoffs with a 5-1 victory over the Los Angeles Kings on Thursday night.

Pierre-Edouard Bellemare, Joonas Donskoi and Andre Burakovsky also scored in the pivotal period. Backup Jonas Johansson made 21 saves to help the Avalanche finish 7-1 against the Kings this season.

Colorado and Vegas both finished with 82 points, but the Avs earned the division crown and the Presidents’ Trophy — awarded to the team with the best regular-season mark — on regulation wins. The Avalanche won the Presidents’ Trophy for the first time since 2000-01, when they went on to hoist the Stanley Cup. 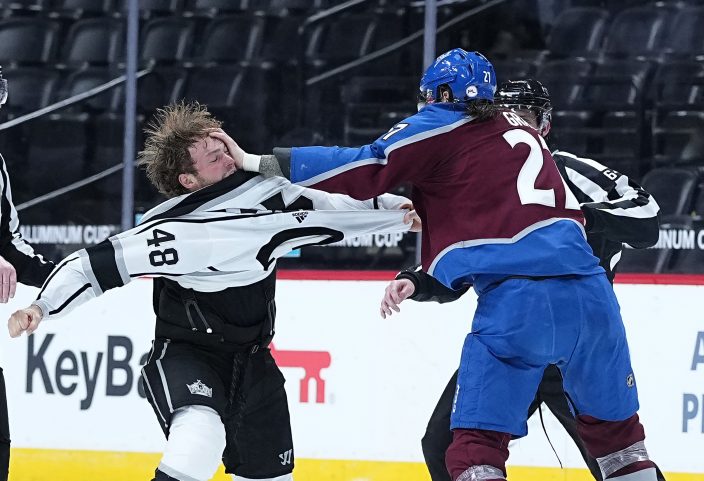 Sean Walker scored for the Kings.

Zach Sanford also scored and Jordan Binnington made 16 saves. The Blues are locked into fourth place in the West Division.

Elias Lindholm and Matthew Tkachuk each had a goal and an assist in Calgary's victory over Vancouver. Rasmus Andersson and Andrew Mangiapane also scored, Jacob Markstrom made 24 saves and Johnny Gaudreau had two assists. Matthew Highmore scored for Vancouver.

Eliminated from playoff contention, Calgary and Vancouver will meet three more times wile the postseason gets underway. They are making up games lost when the coronavirus swept through the Canucks and suspended their season for three weeks.

The Canucks will play at Edmonton on Saturday, then close the season against the Flames with games in Vancouver on Sunday and Tuesday and Calgary on Wednesday.

James Kaprielian finally made it t ...