The anticipated debuts of Seattle prospects Jarred Kelenic and Logan Gilbert were overshadowed by a masterful pitching performance by Plesac.

His bid for Cleveland’s first no-no since 1981 ended when J.P. Crawford led off the eighth inning with a line-drive single that just cleared the glove of leaping shortstop Amed Rosario. 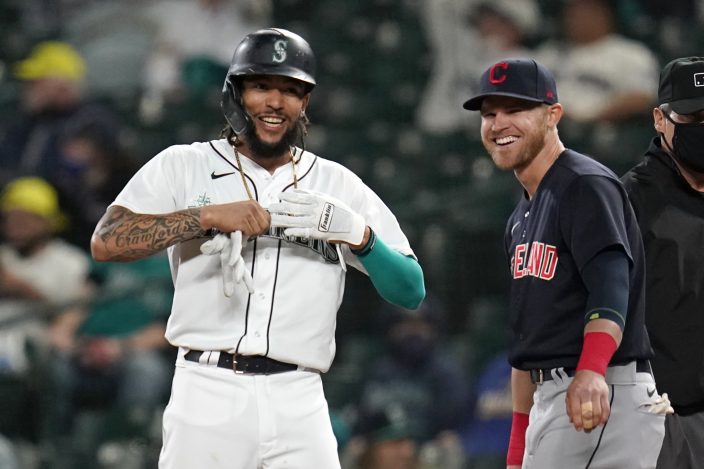 Seattle Mariners' J.P. Crawford, left, and Cleveland Indians first baseman Jake Bauers smile as they stand at first base after Crawford's single during the eighth inning of a baseball game Thursday, May 13, 2021, in Seattle. The hit was the first of the evening for the Mariners. (AP PhotoElaine Thompson)

Plesac (3-3) lost the shutout moments later when Dylan Moore hit a two-run homer. That sent the Indians’ bullpen into a frenzy to get ready.

Moore’s shot was his fourth of the season and one of the few hard-hit balls all night against Plesac. While he wasn’t overpowering, Plesac managed to induce weak contact for most of the first seven innings.

The right-hander escaped the eighth after a lineout from Evan White and Kelenic’s deep flyout to left-center. He finished with two strikeouts and three walks on 96 pitches. 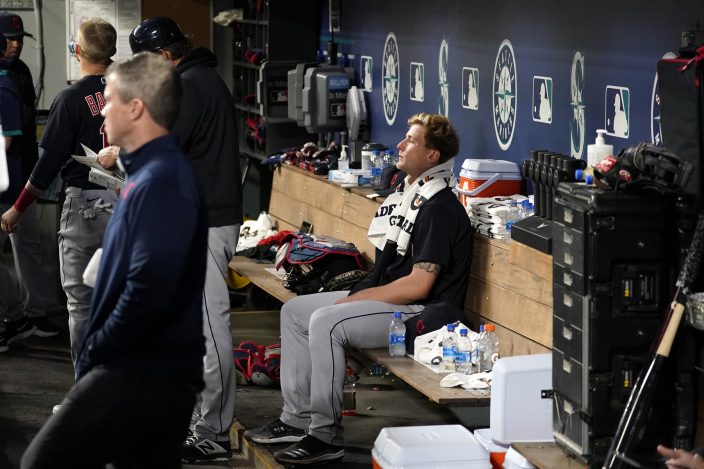 Cleveland Indians starting pitcher Zach Plesac sits in the dugout after the sixth inning of the team's baseball game against the Seattle Mariners on Thursday, May 13, 2021, in Seattle. (AP PhotoElaine Thompson)

Emmanuel Clase walked three straight batters with two outs in the ninth to load the bases. Cleveland manager Terry Francona brought in Bryan Shaw, who struck out Luis Torrens for his first save.

Cleveland has the longest no-hitter drought in the majors — its last one was Len Barker’s perfect game in 1981.

Plesac got all the offense he needed on home runs from Frammil Reyes and José Ramírez. Reyes hit his ninth of the season in the second inning and Ramírez added his AL-leading 11th in the third inning, a two-run shot. Jake Bauers also had an RBI single. 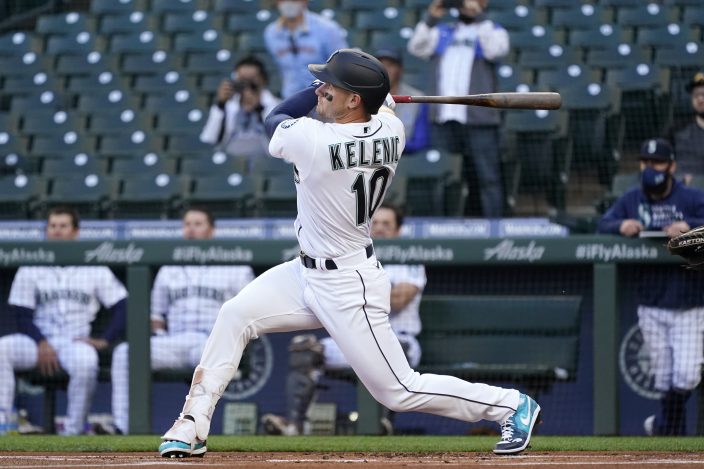 Seattle Mariners' Jarred Kelenic watches his foul ball in his first major league at-bat, in the first inning of the team's baseball game against the Cleveland Indians on Thursday, May 13, 2021, in Seattle. Kelenic flied out on the at-bat. (AP PhotoElaine Thompson)

For much of the night, it appeared Seattle would join infamy by getting no-hit in consecutive home games. Baltimore’s John Means stymied the Mariners on May 5, barely missing out a perfect game against Seattle.

The Mariners left on a road trip but their hitting woes at home remained. Seattle went 16 innings at home without a hit before Crawford’s single.

Gilbert (0-1) lasted four innings, throwing 71 pitches and struck out five. Seattle was going to limit Gilbert to around 85 pitches and was hoping to get him into the fifth. The 24-year-old right-hander threw plenty of strikes and flashed a good mix of breaking pitches to go with his fastball. 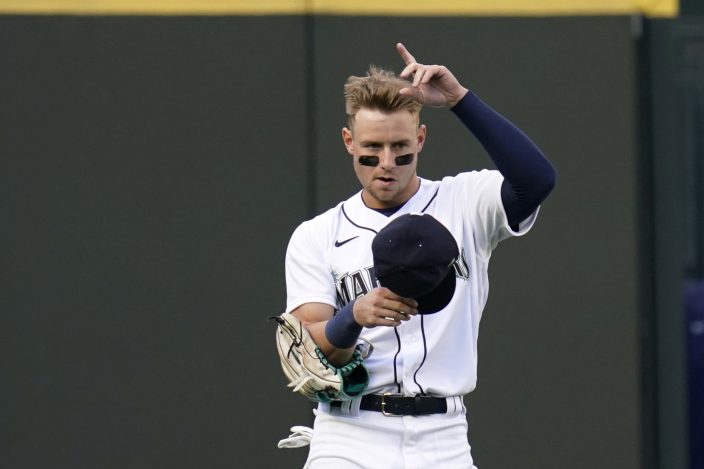 Seattle Mariners left fielder Jarred Kelenic acknowledges fans as he takes his place on the field in the first inning of a baseball game Thursday, May 13, 2021, in Seattle. The game was Kelenic's major league debut. (AP PhotoElaine Thompson)

Kelenic was hitless in four at-bats. He lined out on the first pitch of his first at-bat in foul territory, with right fielder Josh Naylor falling into the stands as he caught the ball.

The Indians have 85% of their club vaccinated, which has allowed them to ease up on some of MLB’s COVID-19 protocols. 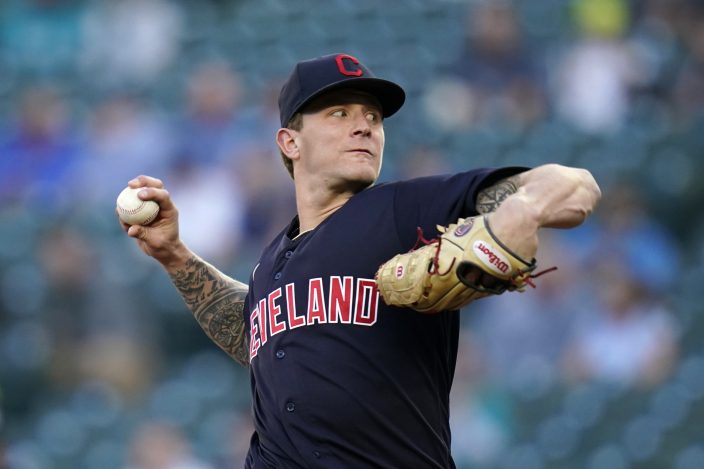 “They’ve relaxed some things that guys are allowed to do and we’re allowed to do in the dugout,” Francona said. “There’s still protocols when you’re in the clubhouse or at the hotel. There’s things you still have to follow. But it felt good to be in the dugout and not have a mask on. It felt like kind of naked, like you had your zipper down or something because it was so different.” 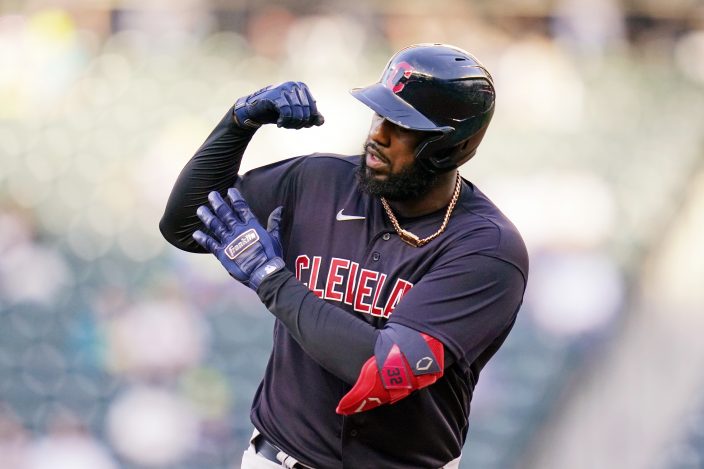 Cleveland Indians' Franmil Reyes shows off his muscle as he rounds the bases on his solo home run against the Seattle Mariners in the second inning of a baseball game Thursday, May 13, 2021, in Seattle. (AP PhotoElaine Thompson)

Indians: Aaron Civale (5-0, 2.91) looks to remain unbeaten on the season. Civale has thrown at least seven innings in four of his seven starts, including his last against Cincinnati when he allowed only one run. 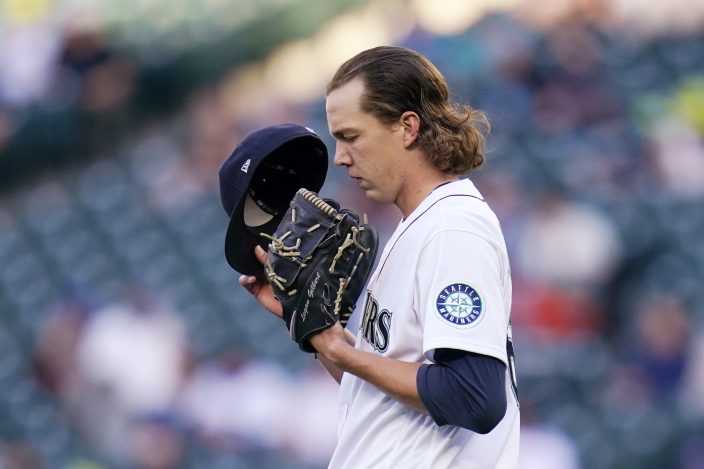 Seattle Mariners starting pitcher Logan Gilbert turns toward the outfield and pauses before throwing his first major league pitch, against the Cleveland Indians in the first inning of a baseball game Thursday, May 13, 2021, in Seattle. (AP PhotoElaine Thompson)