A look at key anniversary years from the PGA Championship, which starts May 20 on the Ocean Course at Kiawah Island in South Carolina:

Walter Hagen won the first of his five PGA Championship finals, and he made short work of everyone in his path at Inwood Country Club in New York. The championship match was against Jim Barnes, who won the first two editions of the PGA Championship and was coming off a nine-shot victory over Hagen and Fred McLeod in the U.S. Open. Hagen shot 69 in the morning for a 1-up lead, built a 4-up lead at the turn of the afternoon round and closed him out, 3 and 2. The 32-man field was composed of defending champion Jock Hutchison and the 31 top finishers from the U.S. Open. Hutchison, who had won the British Open at St. Andrews that summer, did not make it out of the second round. He lost to a 19-year-old Italian-American who had recently changed his name from Eugene Saraceni to Gene Sarazen. 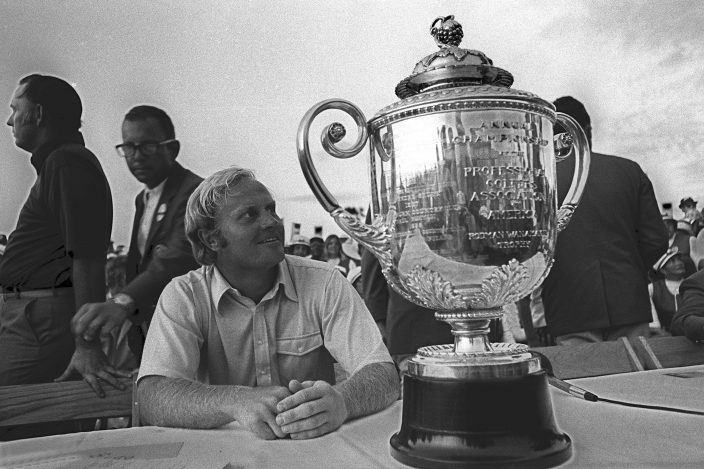 FILE - PGA championship winner Jack Nicklaus smiles at the trophy after the golf tournament in Palm Beach Gardens, Fla., in this Feb. 28, 1971, file photo. It was the last time the event was held in February. (AP PhotoFile)

Ben Hogan captured the first of his nine majors at Portland Golf Club. Hogan overwhelmed Jimmy Demaret, 10 and 8, in the semifinals for the second-largest margin in championship history. But he struggled with his putting in the final against Ed Oliver, falling 3 down after the morning round. He responded with a 30 on the front nine in the afternoon to go 2 up, and then won four out of five holes for a 6-and-4 victory. Oliver won his quarterfinal match, 1 up, over Byron Nelson. It was Nelson’s last PGA Championship. He closed out his career winning 37 of 45 matches. 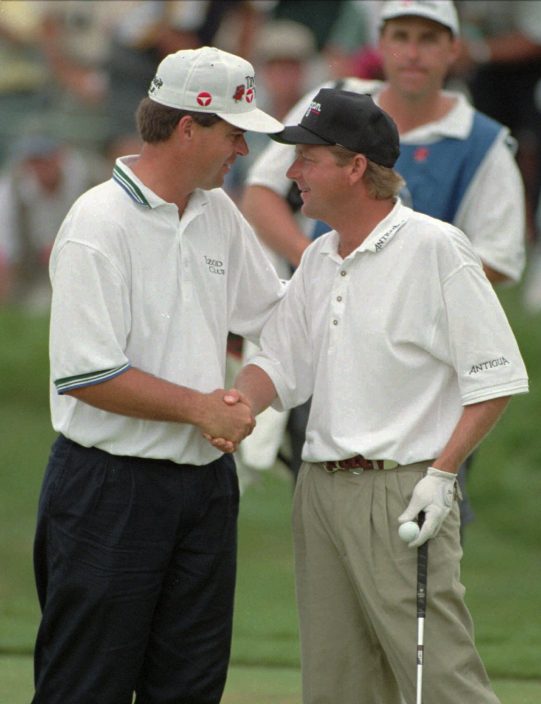 The PGA Championship went from the last major of the year to the first, moving to February so it could be held at PGA National at headquarters in South Florida. The time of the year made no difference to Jack Nicklaus. He opened with a pair of 69s in going wire-to-wire for his second PGA title and his first in eight years. He had a four-shot lead over Gary Player going into the final round. Nicklaus closed with a 73 and won by two shots over Billy Casper. He became the first player to win the career Grand Slam twice, a feat unmatched until Tiger Woods won his second British Open at St. Andrews in 2005. Nicklaus won the 1972 Masters and U.S. Open, giving him the three U.S. majors at the same time.

Mark Brooks won his only major in a playoff over Kenny Perry at Valhalla Golf Club. The Kentucky-born Perry appeared to have it wrapped up until a wild tee shot on the par-5 18th led to bogey and a 68, reducing his lead to one shot. Perry headed to the television tower as Brooks birdied the 18th to force a sudden-death playoff. In the playoff, Perry missed the fairway to the left in heavy rough and took four to reach the green. Brooks hit a 3-wood from 229 yards and made birdie. The tournament marked the first time Phil Mickelson had the lead after any round in a major. He was the 36-hole leader until going 74-72 on the weekend. It would be eight years before he finally won a major. 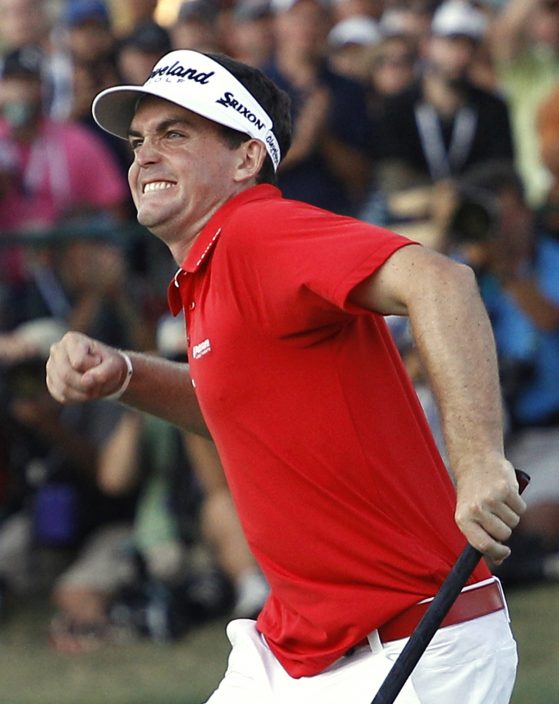 FILE - Keegan Bradley celebrates on the 18th green after winning a three-hole playoff against Jason Dufner during the PGA Championship golf tournament at the Atlanta Athletic Club in Johns Creek, Ga., in this Sunday, Aug. 14, 2011, file photo. This is the 10-year anniversary of that win. (AP PhotoMatt Slocum, File)

David Toms took the lead at Atlanta Athletic Club with a hole-in-one on the 243-yard 17th hole. This PGA Championship is remembered as much for a 12-foot putt. Phil Mickelson three-putted the 16th hole to fall one shot behind. On the par-4 18th, with water guarding the front of the green, Toms chose to lay up from the rough. He hit wedge into 12 feet. Mickelson had a 30-foot birdie putt that stopped two turns short of going in. Toms rapped in the par putt for a one-shot victory. He closed with a 69 and finished at 15-under 265, breaking by two shots the major championship scoring record previously held by Greg Norman in the 1993 British Open and Steve Elkington and Colin Montgomerie in the 1995 PGA Championship.

Keegan Bradley became only the third player in the last century to win a major in his first try, and he never could have imagined how at Atlanta Athletic Club. He was five shots behind with three holes to play after a triple bogey on the 15th hole. Bradley responded with back-to-back birdies for a 68. Then, he watch Jason Dufner hit driver into the water on the 15th to make bogey, drop another shot from the bunker on the 16th and three-putt the 17th. He shot 69 and they faced a three-hole playoff. Bradley made birdie on the 16th hole and never gave back the lead. Tiger Woods missed the cut for the first time in the PGA Championship.