Don't expect a slow start when Barcelona and Chelsea square off in the Women's Champions League final on Sunday night in Gothenburg, Sweden.

Barça made that mistake two years ago in its only other final and found itself trailing 4-0 before halftime to Lyon.

And Chelsea has been planning for this all year. 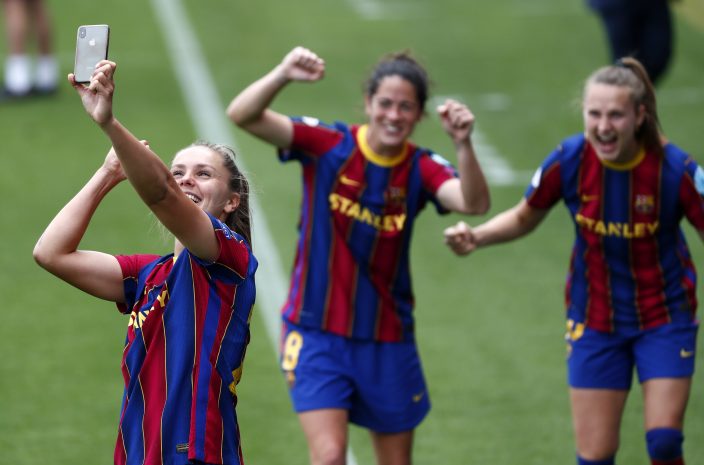 “We have been open with our ambitions — it’s been about trophies from the start,” Chelsea captain Magdalena Eriksson said.

For the first time since 2007, the European champion won't be a French or German club. Lyon is home retooling for next season after having won the last five Champions League titles. A Spanish team has never won the competition, and Chelsea is making its first appearance in the final.

Barcelona forward Lieke Martens remembers feeling like the underdog in the 2019 final, with her team losing 4-1 after a late consolation goal. 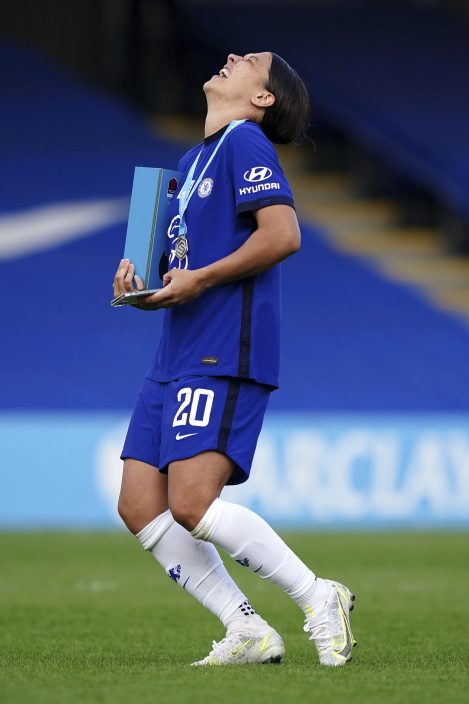 Chelsea's Samantha Kerr celebrates with the FA Women's Super League trophy at Kingsmeadow, London, Sunday, May 9, 2021. Chelsea retained the Women’s Super League title and became the all-time record champion in the English game by beating Manchester City to first place. Chelsea was a 5-0 winner at home to Reading and finished two points ahead of City. (John WaltonPA via AP)

“I think at the beginning we were maybe also a bit scared,” Martens said in an interview with The Associated Press.

Lesson learned, she said. This campaign, Barcelona eliminated Manchester City in the quarterfinals and Paris Saint-Germain in the semis. PSG had earlier beaten Lyon. 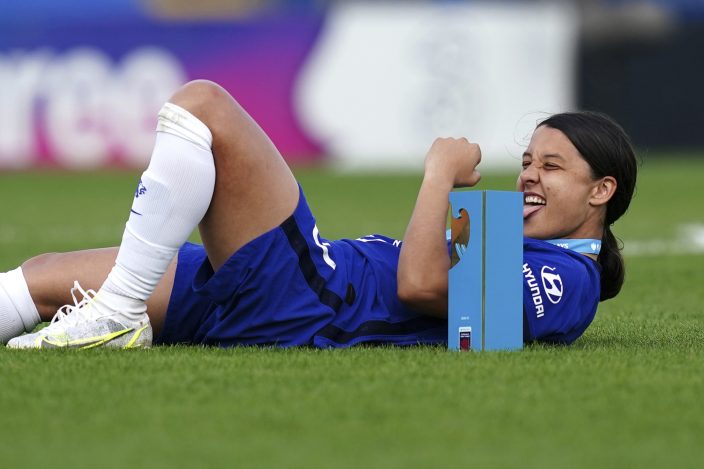 Chelsea's Samantha Kerr celebrates after winning the FA Women's Super League trophy at Kingsmeadow, London, Sunday, May 9, 2021. Chelsea retained the Women’s Super League title and became the all-time record champion in the English game by beating Manchester City to first place. Chelsea was a 5-0 winner at home to Reading and finished two points ahead of City. (John WaltonPA via AP)

Chelsea boasts a cast of high-profile internationals as it tries to become the first English champion since Arsenal beat Swedish club Umeå 14 years ago, when it was called the UEFA Women's Cup. Umeå had won twice before. The rest of the champions have been either Lyon or teams from Germany.

Chelsea, having won the Women's Super League title and League Cup this season, also has a chance to match Arsenal’s quadruple from 2007. After Sunday’s final, there’s still the women’s FA Cup.

“It’s been quite clear that reaching all the way in all competitions, that is our goal, and we all felt like it’s a completely realistic goal to have,” said Eriksson, a Sweden center back who added that winning the Champions League final in her country “has been my dream and my goal" since Gothenburg was selected to host.

Chelsea beat Bayern Munich in the last four and two-time champion Wolfsburg in the quarterfinals.

The Blues are capable of scoring in multiple ways — building up in possession, counterattacks, set pieces and turnovers from high pressing.

England forward Fran Kirby netted twice in the 4-1 win over Bayern in the second leg of the semifinals, making her the competition's co-leader with Barça's Jenni Hermoso — both have six goals.

Chelsea has spent aggressively for talent. It added Denmark captain Pernille Harder this season from Wolfsburg, paying what the German club said was a record transfer fee for women’s soccer, reportedly $355,000. The forward headed in the winner off a free kick against Bayern two weeks ago.

Then there's Sam Kerr, Australia’s prolific striker who was top scorer in the WSL this season.

Barcelona will bring plenty of scoring punch to Gamla Ullevi stadium, too. Hermoso, a Spanish international, can play forward or attacking midfield. Nigeria striker Asisat Oshoala, who scored in the 2019 final, is a threat though she's struggled with injuries.

Meanwhile, Martens scored twice in Barça's 2-1 victory over PSG in the second leg of the semifinals. Their style is possession-based, like the men's side.

“That’s actually the philosophy of the whole club,” Martens said.

Barcelona is heavily in debt and the men's side has stumbled lately — and could face sanctions for its support of the ill-fated European Super League.

The Chelsea men's team has also reached the Champions League final — against Manchester City on May 29.

Not so long ago, Tadej Pogacar was ...

Women’s Champions League title up for grabs with Lyon gone