Chelsea plays Leicester in the FA Cup final at Wembley Stadium in the first of two huge matches between the clubs over the next four days. On Tuesday, they meet in the Premier League in what could end up being a playoff to secure one of the Champions League qualification spots. The winner of the cup final would gain a psychological edge. Chelsea is seeking to win its first trophy under Thomas Tuchel, who joined in January and has already got the team to the Champions League final taking place on May 29, and the FA Cup final for the ninth time. Leicester has never won the FA Cup and is seeking to capture a first trophy since improbably winning the Premier League in 2016. There are also three matches in the league, with West Ham aiming to stay alive in the race for a top-four finish by beating Brighton. A win would leave West Ham in fifth, three points behind fourth-placed Chelsea. Southampton hosts already-relegated Fulham, and in-form Leeds travels to Burnley. 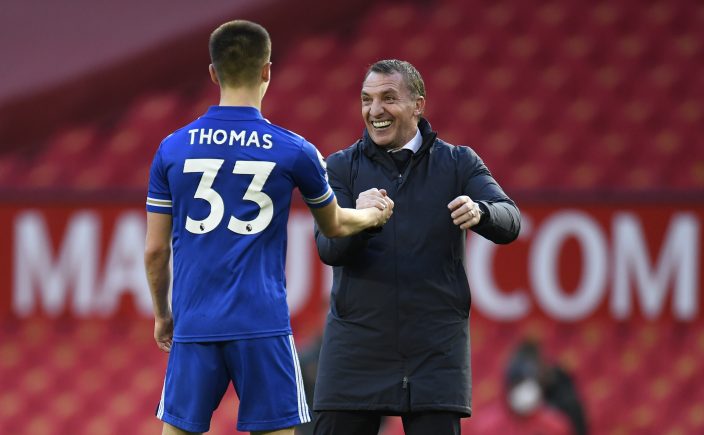 Leicester's manager Brendan Rodgers, right, celebrates with Leicester's Luke Thomas at the end of the English Premier League soccer match between Manchester United and Leicester City, at the Old Trafford stadium in Manchester, England, Tuesday, May 11, 2021. (Peter PowellPool via AP)

Antonio Conte’s Inter Milan squad already ended Juventus’ record run of nine straight Serie A titles. Now, Conte is looking to end his former team’s chances of qualifying for the Champions League. If Inter wins at Juventus, the Bianconeri may be mathematically eliminated from contention of finishing in the top four. There’s a tight battle between four clubs for the remaining three spots, with Atalanta (75 points), AC Milan (75), Napoli (73) and Juventus (72). Atalanta visits a Genoa squad with little to play for, while AC Milan (against Cagliari) and Napoli (against Fiorentina) play on Sunday. Lazio, which has 67 points but a game in hand, also still has an outside shot at the top four if it can beat Roma in the city derby ahead of its postponed game against Torino next Tuesday.

Cologne could be relegated from the Bundesliga for the sixth time if it loses at Hertha Berlin and other results conspire against it in the second to last round. Hertha is also not safe, but can clinch survival with a win. Arminia Bielefeld, two points above Cologne, hosts Hoffenheim, and Werder Bremen visits Augsburg for another relegation battle. Bremen is ahead of Bielefeld only on goal difference, and Augsburg can still be caught. Bayern Munich already has the title but Robert Lewandowski needs just one more goal to tie Bayern great Gerd Müller’s record of 40 from the 1971-72 season. The Poland star's teammates have vowed to help him achieve it in Freiburg. Freiburg can still qualify for the Conference League, Europe’s new third-tier competition due to begin next season, by finishing seventh. Eintracht Frankfurt aims to pressure Borussia Dortmund in the last place for Champions League qualification with a win at already-relegated Schalke. Bayer Leverkusen can clinch Europa League qualification with a win over Union Berlin, which is fighting Borussia Mönchengladbach for the Conference League place. Gladbach, ahead of Union on goal difference, welcomes Stuttgart for Marco Rose’s last game at home as coach.

Hertha Berlin out to dispel gloom before derby, Bayern ...

After years of disappointment, Her ...

MATCHDAY: Bologna playing in Serie A despite barely training

MATCHDAY: United looks for reaction against Villa in FA Cup

MATCHDAY: PSG without Messi, Klopp back in Liverpool dugout