On Friday morning, a military airstrike smashed my family's farm in the northern Gaza Strip into a jagged mass of metal and splintered trees. An Israeli bomb had slammed into the yard, carving a crater into the dirt and leaving rubble in its wake.

The conflict, once again, hit home.

The first Gaza war taught me that while our lush citrus grove might offer some breathing space from the congestion and difficulties of city life, it’s no refuge. A previous Israeli airstrike killed my father, Akram al-Ghoul, on January 3, 2009. As fighting raged, he’d insisted on sleeping at the farm to tend to the cattle and chicken, and to nurture the trees. 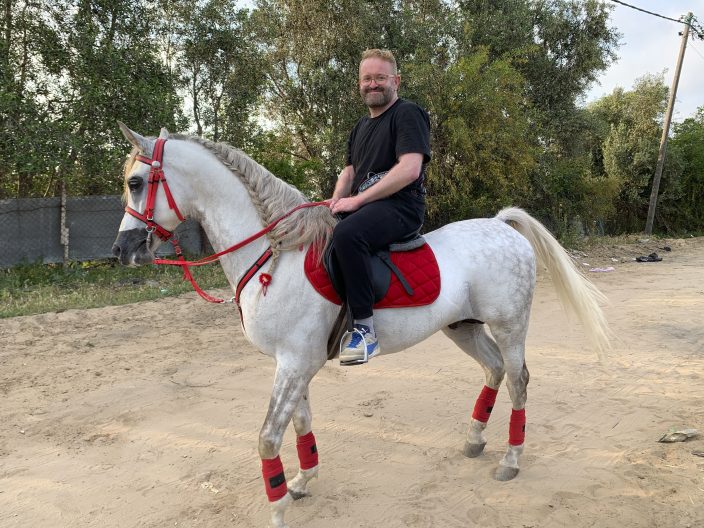 Associated Press journalist Fares Akram rides a horse outside his family’s farm in 2020, in the northern Gaza Strip. An Israeli airstrike smashed into the property on Friday, May 14, 2021, leaving a jagged mass of metal and splintered trees. (Akram Family via AP)

In all, six of my relatives, three close friends and several colleagues have died in the three bloody wars and countless battles between Israel and Hamas. Each time the violence erupts and I report as a journalist on the people who lost their homes, their children or their lives, the memories creep back. I always think, “That could be me.” When the thundering bombs, buzzing drones and pounding artillery refresh the pain and trigger the old fear, I seek refuge in work.

The Associated Press office is the only place in Gaza City I feel somewhat safe. The Israeli military has the coordinates of the high-rise, so it's less likely a bomb will bring it crashing down. But on a deeper level, it's speaking to people in Gaza, working to get their voices out of a territory they themselves cannot leave, that keeps me sane. When I tell the world what's happening here, I find some small solace.

Still, the work comes at a cost. This latest explosion of violence already has drained me. I can't imagine covering another 2014 — the year of Gaza's grisliest conflict, which killed some 2,200 Palestinians. I can't imagine returning to those seven sleepless, hellish weeks of bombardment, bloody hospitals and overflowing morgues. I may have no choice. 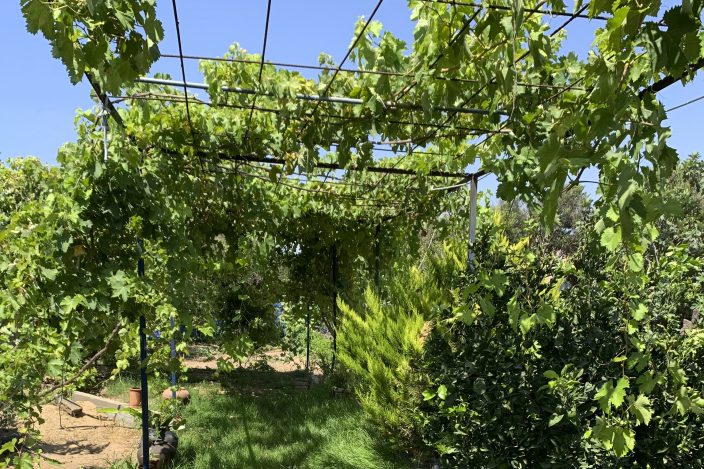 This photo taken in July 2020 shows the family garden of Associated Press Journalist Fares Akram in the northern Gaza Strip. A military airstrike smashed his family’s farm on Friday, May 14, 2021, leaving behind a jagged mass of metal and splintered trees. (AP PhotoFares Akram)

As the terrible nights grind on now, I feel fortunate to be alone here. My wife and two daughters are living safely in Canada. As Gaza marked Eid al-Fitr, one of the biggest Muslim holidays, under the long shadow of war this week, no longer were my girls leaping out from bed, screaming at the falling bombs, huddling terrified in the darkness. Instead, they feasted on chocolate and tried on new clothes.

At times, when their absence feels excruciating, I’ve regretted the choice to send my family abroad while I am trapped in this blockaded enclave, unable to see them without months of paperwork. But it’s weeks like these, filled with worry for my mother and sister who also remain in Gaza, that bring certain and pure relief. At least my daughters are out of harm's way.

I know their hearts remain in this patch of earth. After I shared photos of our wrecked farm Friday, my 9-year-old called me crying. The blast had felled the fir tree she’d planted three years ago and cherished ever since.

Like my father, I grew up in Gaza City. His father grew up just across the border and, like hundreds of thousands of other Palestinians, fled the 1948 war surrounding Israel's creation. A decade later, he began planting citrus in Beit Lahiya, the northern Gaza Strip.

His nostalgic desire to live as close as possible to the border — to his original village in what is now Israel — has put the farm in what can be one of the territory's most dangerous corners. Seen from roof height, the Israeli frontier looms as an ominous vista, with fortified fences and troops staffing guard towers.

The Gaza that the world knows today — impoverished, under a crippling Israeli-Egyptian blockade, always mired in conflict — was not the Gaza of my youth. People can't believe it when I tell them how as a teenager, before the second intifada erupted in the early 2000s, I flew from Gaza's airport (yes, airport) to Istanbul for a day of press conferences and back within 24 hours.

Now, thousands of Palestinians wait weeks to hear authorities call their names over a crackling loudspeaker to pass through the iron gate known as Rafah crossing into Egypt, where a harrowing journey through the lawless desert of North Sinai awaits.

When the Palestinian uprisings seized the world's attention, I dove into journalism with my TV producer uncle, Marwan Alghoul, a source of fascination and inspiration. Moments of hope for my homeland punctuated my career; in 2005, just after Israel pulled out, massive aid pledges flooded the tiny territory. Egypt flung open Rafah, and for once I imagined living a somewhat normal life.

But two years later, the Hamas militant group took over Gaza, and conditions went from bad to worse. The group is committed to confronting Israel, which has imposed a land, sea and air blockade.

Now, even as my daily fare is documenting the tragedies of the endless conflict between Hamas and Israel, people in Gaza often urge me to set hope against experience, to believe in a better future. Abraded by three wars, I've stopped heeding their advice and find hope only in planning a life far away.

The conflict never really changes. With Israel and Hamas locked in a violent loop, so much remains static. After an airstrike pummeled my uncle's home in 2014, he waited patiently for compensation to rebuild. Three years later, installments trickled in and he could finish most of the repairs.

On Thursday night, a shell from an Israeli tank crashed into his house.

Fares Akram has been the AP's correspondent in Gaza since 2014.