A day after Philadelphia's health commissioner was forced to resign over the cremation of partial remains belonging to victims of a 1985 bombing of the headquarters of a Black organization, the city now says those remains were never actually destroyed.

Mayor Jim Kenney released a statement late Friday saying that the remains of MOVE bombing victims thought to have been cremated in 2017, under orders from Health Commissioner Thomas Farley, were located at the medical examiner's office that afternoon. Among the 11 slain when police bombed MOVE's headquarters, causing a fire that spread to more than 60 row homes, were five children.

“I am relieved that these remains were found and not destroyed, however I am also very sorry for the needless pain that this ordeal has caused the Africa family,” Kenney said, adding that “many unanswered questions” surround the case — including why Farley's order wasn't obeyed. 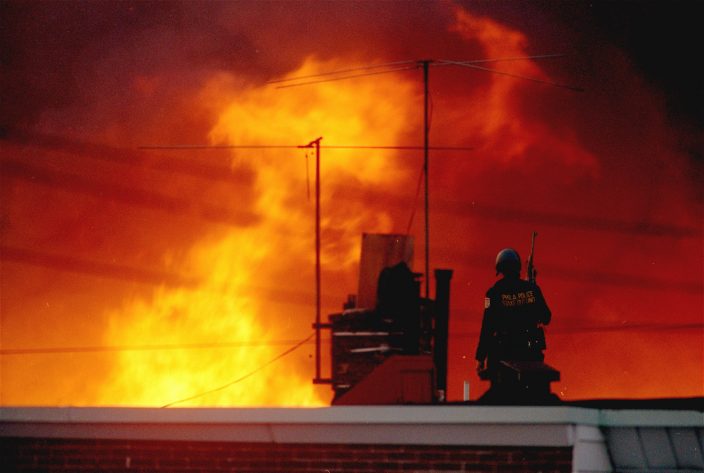 FILE - In this May, 1985 file photo, a Philadelphia policeman is seen on a rooftop as flames rise from a row of burning homes beyond, in Philadelphia. The fire started when police dropped a bomb onto the house of the militant group MOVE, on May 13, 1985 and fire spread throughout the area. A day after Philadelphia's health commissioner was forced to resign over the cremation of partial remains thought to belong to victims of a 1985 bombing of the headquarters of a Black organization, the city now says those victims' remains were never destroyed. City officials told the victims' family Friday, May 14, 2021 that a subordinate had disobeyed Health Commissioner Thomas Farley’s 2017 order to dispose of the remains. (AP PhotoGeorge Widman, File)

Kenney compelled Farley to resign Thursday, the 36th anniversary of the MOVE bombing, after consulting the victims' family members. At the time, the mayor said Farley's decision to order the cremation and disposal of the remains, without notifying the decedents' family members, lacked empathy.

In a statement released by the mayor’s office Thursday, Farley said that he was told by the city’s medical examiner, Dr. Sam Gulino, that a box had been found containing materials related to MOVE bombing victims’ autopsies. The box turned out to contain bones and bone fragments.

It is a standard procedure to retain specimens after an autopsy ends and the remains are turned over to the decedent’s next-of-kin, Farley said — but “not wanting to cause more anguish,” he ordered their disposal on his own authority, without consulting other top city officials.

After recent reports that local institutions had remains of MOVE bombing victims, Farley said he reconsidered his actions. Kenney said Farley told him about his order late Tuesday, took responsibility and resigned from the $175,000-a-year job he’d held for five years.

“I profoundly regret making this decision without consulting the family members of the victims and I extend my deepest apologies for the pain this will cause them,” Farley wrote Thursday.

Gulino was also placed on leave pending an investigation. Kenney's statement Friday didn't mention Farley or Gulino by name, but promised the investigation would continue with “full transparency” for the victims' family.

An attorney for the victims' family members, Leon A. Williams, told The Philadelphia Inquirer that city officials, including Kenney, had notified the family Friday.

Kenney's statement said the family members and their representatives were able to ask the medical examiner's office questions and he pledged to turn over the remains once the investigation was complete.

“There are also clearly many areas for improvement in procedures used by the Medical Examiner’s Office,” he wrote.

A lawyer who had accompanied MOVE members to a meeting with Kenney prior to Friday's revelations, Michael Coard, had said they were “outraged, enraged, incensed, but mostly confused” by what was thought to have been the destruction of the remains. He said Thursday that a lawsuit was possible.

Williams did not describe the family's reaction to Friday's news to the Inquirer.

Late Thursday, dressed all in white, MOVE members read a minute-by-minute account of the bombing and the confrontation that led up to it: Philadelphia police, attempting to serve warrants on four members and evict the rest of the Black back-to-nature group, dropped a bomb from a helicopter, igniting fuel for a generator stored on the roof.

Members on Thursday recounted alleged comments from the city emergency officials directing first responders to let the house burn. Fire department leaders later said they were scared their firefighters could face gunfire if they attempted to get to the home in the middle of the block. The fire quickly spread, displacing more than 250 people.

The city appointed a commission to investigate the decisions that led to the bombing, and in 1986 it issued a report calling the decision to bomb an occupied row house “unconscionable.” MOVE survivors were awarded a $1.5 million judgment in a 1996 civil lawsuit.

City officials claimed at the time that neighbors had filed complaints, saying there were issues with sanitation, vermin and noise at odd hours. But documents gathered by the commission and in the research into the bombing showed city officials, including the mayor, had designated the group as a terrorist organization. Group members maintained they had been targeted since the 1978 eviction attempt where a police officer was killed and called the complaints explanation a lie.

“I hope that this latest discovery can give them some level of solace,” Kenney said of MOVE members Friday.