Hunter Renfroe and Bobby Dalbec each hit a two-run homer, and the Boston Red Sox rallied to beat the Los Angeles Angels 4-3 on Friday night.

The Red Sox opened the weekend series with their second straight victory after dropping three in a row. Matt Andriese (2-2) got the win despite allowing José Iglesias’ two-run double in the seventh, and Matt Barnes struck out the side in the ninth for his ninth save.

Shonhei Ohtani hit his 11th homer for the Angels, who lost their third straight.

Boston Red Sox's Bobby Dalbec acknowledges the fans after his two-run home run against the Los Angeles Angels during the seventh inning of a baseball game Friday, May 14, 2021, at Fenway Park in Boston. (AP PhotoWinslow Townson)

Los Angeles grabbed a 3-2 lead on Iglesias’ double, but Dalbec responded with a go-ahead drive off Tony Watson (1-1) in the bottom half of the seventh.

Fans chanted “Bobby!” for a few minutes until he answered the curtain call after hitting a two-run homer on consecutive nights. Friday night’s shot landed with a thud when it bounced off a tarp above the seats in left-center.

Dalbec said catcher Christian Vázquez convinced him to come out of the dugout and give the fans a wave. 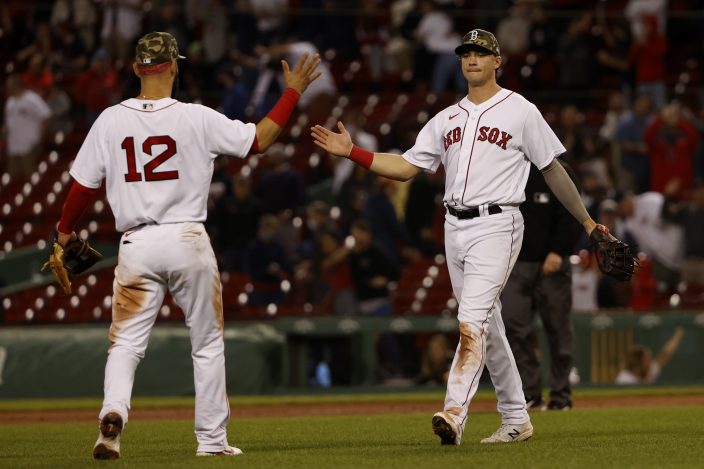 Boston Red Sox's Bobby Dalbec is congratulated by Marwin Gonzalez (12) after their win over the Los Angeles Angels in a baseball game Friday, May 14, 2021, at Fenway Park in Boston. (AP PhotoWinslow Townson)

“It was crazy — crazy moment, special moment. Something that you dream of as a kid," Dalbec said.

Boston right-hander Nick Pivetta struck out seven in six-plus innings. He was charged with two runs and four hits.

Pivetta was pulled after Anthony Rendon's leadoff single in the seventh. Jared Walsh followed with a single against Andriese, and both runners scored when Iglesias lined a double to the corner in right. 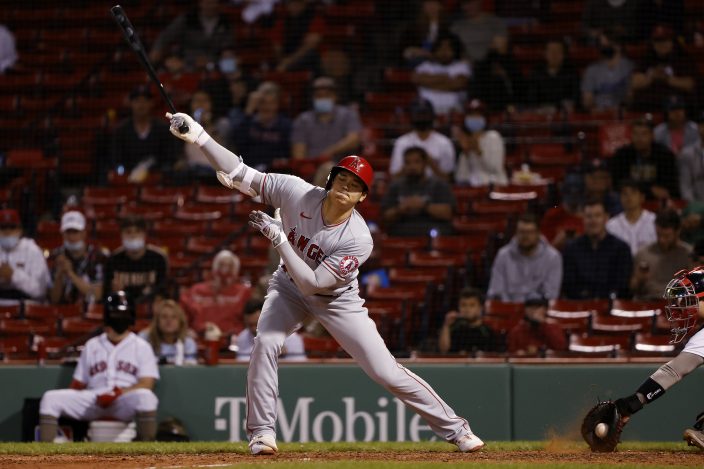 Los Angeles Angels' Shohei Ohtani strikes out swinging during the eighth inning of the team's baseball game against the Boston Red Sox on Friday, May 14, 2021, at Fenway Park in Boston. (AP PhotoWinslow Townson)

Pivetta left with a no-decision, but he is 7-0 in 10 starts since joining the Red Sox in a trade with Philadelphia last summer.

“He really had very good stuff tonight," Angels manager Joe Maddon said. “He was throwing the ball exactly where he wanted to. I think you have to give him credit.”

Griffin Canning had a similar night for the Angels, striking out seven over six innings and allowing two runs and six hits. 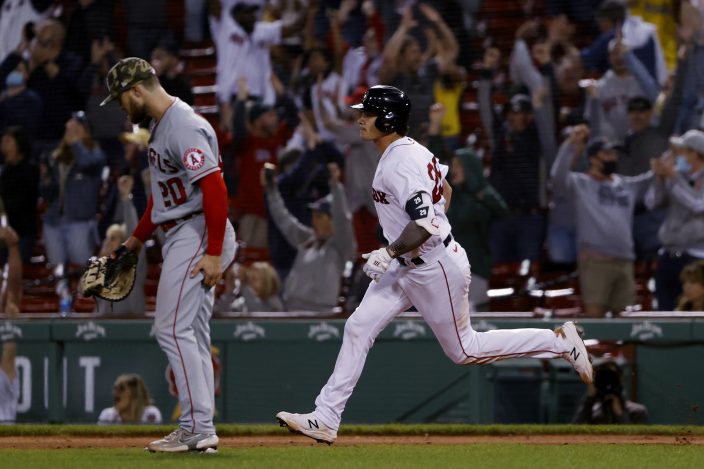 “Everybody looks like they’re throwing the ball as well as they can. We’ve just got to get the results. We haven’t had those,” Maddon said.

The Red Sox jumped out to a 2-0 lead in the second when Rafael Devers singled and Renfroe hit a drive to straightaway center for his fifth homer. 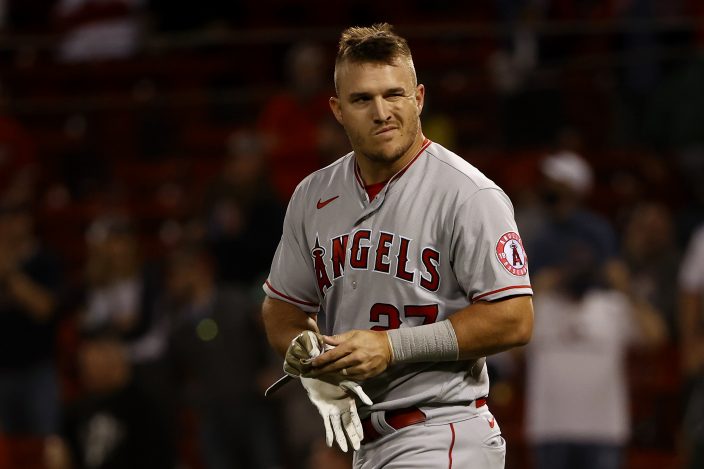 Los Angeles Angels' Mike Trout looks toward the dugout after striking out during the eighth inning of a baseball game against the Boston Red Sox, Friday, May 14, 2021, at Fenway Park in Boston. (AP PhotoWinslow Townson)

All four of Boston's runs were generated by the last two hitters in the order. Renfroe batted eighth and went 2 for 3. He singled in the seventh before Dalbec followed with his fourth homer of the season.

“It’s fun to get things going, especially at the bottom of the lineup," Dalbec said. “The top of the lineup’s been amazing all year, so it feels good to pick the team up."

Maddon said the Angels were in good position to win and played well, but need to start winning some of these games

“It is frustrating. We’ve got to keep fighting through it and we will," he said. "I like the attitude of the team right now. I like the vibe. It’s great. We’ve just got to finish these games off. We’ve lost games with leads late too often and I do believe this bullpen is better than it has shown on a consistent basis.”

Ohtani will get some extra rest before he makes his next pitching start, Maddon said. Ohtani was scheduled to come up again in the Angels’ rotation on Tuesday against Cleveland.

“We’re going to move him him back. We haven’t decided to where. No blisters, no nothing. It’s just being proactive,” Maddon said.

Maddon said he thought Ohtani showed some signs of fatigue as DH on Wednesday, when he went 0 for 4 after pitching the night before against the Astros, striking out 10 over seven innings.

Ohtani was still in the lineup as DH Friday, playing in his 35th of the Angels’ 37 games.

Angels: Rendon (left knee contusion) was reinstated from the injured list after missing nine games since fouling a ball off his knee May 3 against Tampa Bay. ... C Max Stassi (concussion) is getting closer to returning after being out since May 4, but Maddon said he isn’t quite ready yet.

Red Sox: After getting a night off from defense but playing as DH on Thursday, Xander Bogaerts was back in the lineup at shortstop. Manager Alex Cora shifted Devers to DH and started Marwin Gonzalez at third. J.D. Martinez, Boston's regular DH, started in left field for the second straight night.