Judge is now 10 for 19 with five home runs facing the Orioles this season. He has 13 career multihomer games, five of them against Baltimore.

Urshela is still hampered by a left knee injury but was available off the bench in the seventh. After Miguel Andújar singled and Kyle Higashioka earned a walk, Urshela hit the second pinch-hit homer of his career off Travis Lakins (1-4) to erase a 4-2 deficit. 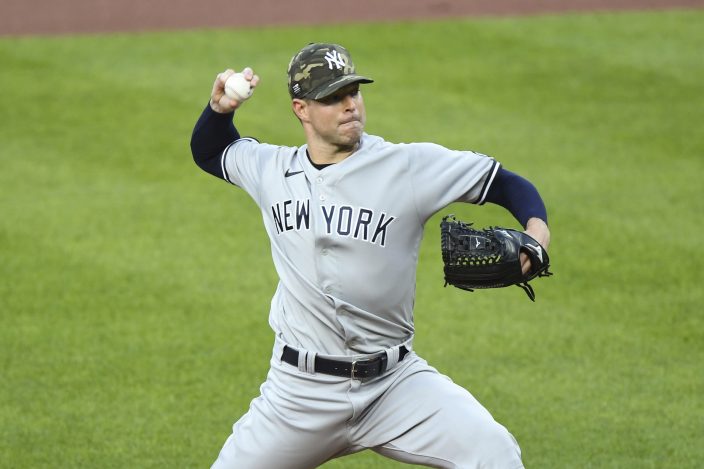 New York Yankees starting pitcher Corey Kluber throws during the first inning of a baseball game against the Baltimore Orioles on Friday, May 14, 2021, in Baltimore. (AP PhotoTerrance Williams)

“It was just a big-time at-bat by a really good player,” manager Aaron Boone said. “I’m glad I had (him) sitting over there as a weapon tonight, obviously.” 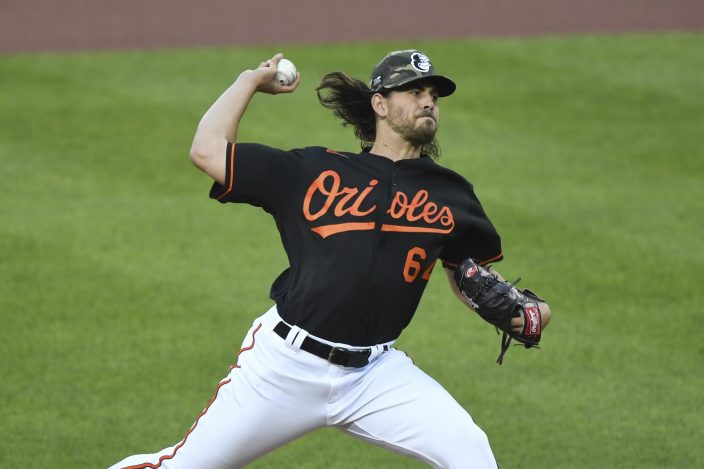 Baltimore Orioles starting pitcher Dean Kremer throws during the first inning of a baseball game against the New York Yankees on Friday, May 14, 2021, in Baltimore. (AP PhotoTerrance Williams)

It was the second time in 17 days Kluber earned a win against Baltimore, which fell to 0-16 when trailing after eight innings.

“For the most part, I executed pitches pretty well throughout the course of the game,” Kluber said. 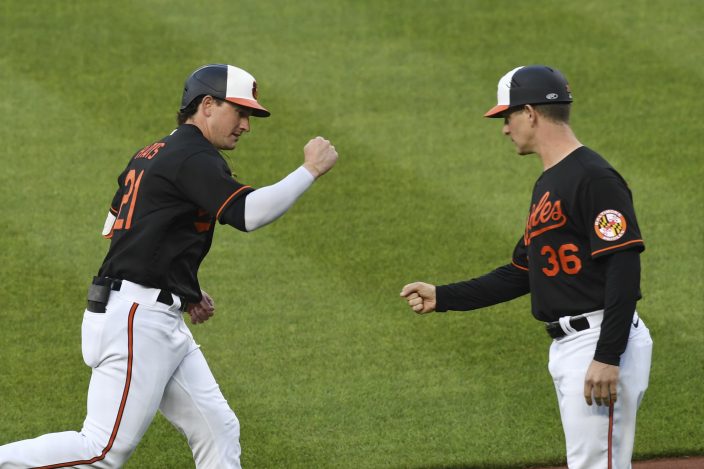 Jonathan Loáisiga picked up his second save.

Judge gave the Yankees the lead on the first with a deep, solo homer off Orioles rookie Dean Kremer, who had lost his previous two starts to the Yankees this season. 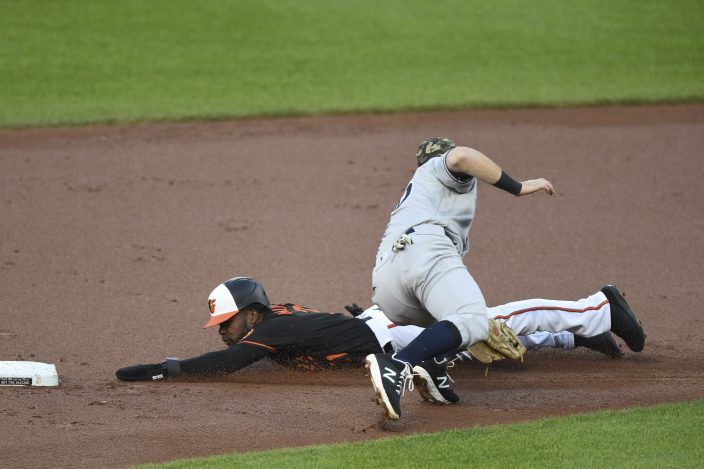 Baltimore Orioles' Cedric Mullins is tagged out by New York Yankees second baseman DJ LeMahieu while attempting to steal second during the first inning of a baseball game on Friday, May 14, 2021, in Baltimore. (AP PhotoTerrance Williams)

Austin Hays tied the game with a one-out home run in the bottom half.

Judge gave the Yankees a 2-1 lead in the fourth with his second homer of the game. He has 22 home runs against Baltimore in 58 games, his most against any team.

“We were just a run short tonight,” Orioles manager Brandon Hyde said. “I thought Dean threw the ball well. He gave up two homers there to Judge. He gave us five innings, left with a lead and we just didn’t hold it.”

The Orioles took a 4-2 lead in the fifth on a pair of RBI doubles by Pedro Severino and Trey Mancini, sandwiched between a run-scoring single by Pat Valiaka off Kluber.

Urshela, however, erased the deficit with one swing of the bat.

The Yankees didn’t have any new positive tests for COVID-19 to add to their eight cases already, Boone said before the game. The team revealed earlier this week that Torres tested positive for the coronavirus despite being fully vaccinated and having previously had COVID-19. In addition to Torres, New York has three coaches and four traveling staffers that are breakthrough positives, meaning they tested positive despite being fully vaccinated.

Yankees: Hicks had an MRI that revealed a torn tendon sheath in his left wrist. Boone said the team will initially try to treat the injury with medicine, and if that goes well, Hicks could be available this weekend. Hicks, however, could require surgery if the medicine is not effective. “I think it could go either way,” Boone said.

Yankees: RHP Domingo German (2-2, 4.02 ERA) earned his second win of the season against the Orioles when he threw seven scoreless innings in a 7-0 victory April 28.

Orioles: RHP Jorge Lopez (1-3, 5.63 ERA) had a no-decision in his previous start against the Yankees, allowing two runs over four innings in Baltimore’s 4-3 victory April 29.

Kluber gets win, Yankees hit 3 HR in 5-1 win over Orioles

Judge HR rallies Yankees to another win over Orioles 8-6