The play-in field isn’t quite set.

And nobody knows who’ll play anybody yet.

Welcome to the final weekend of the NBA’s regular season, with every first-round playoff matchup — even every play-in game matchup — still undecided, and the defending champion Los Angeles Lakers needing two wins in the season’s final two days to avoid the play-in round. 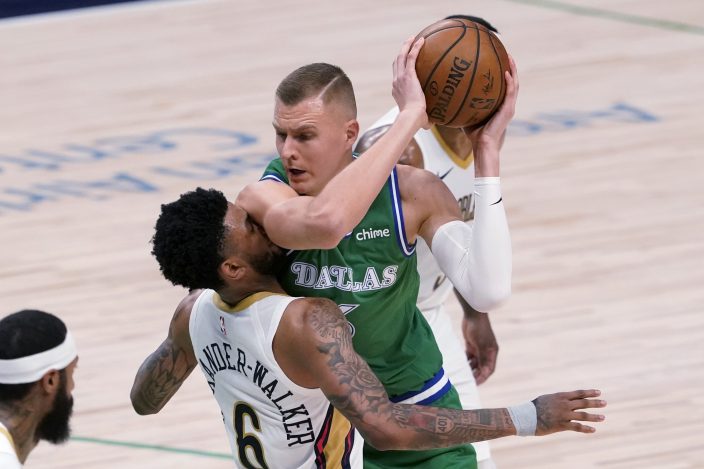 New Orleans Pelicans guard Nickeil Alexander-Walker (6) takes an arm to the face while defending against Dallas Mavericks center Kristaps Porzingis during the first half of an NBA basketball game in Dallas, Wednesday, May 12, 2021. (AP PhotoTony Gutierrez)

— Washington clinched the last remaining Eastern Conference play-in berth by beating Cleveland, a result that ended Chicago’s playoff hopes. The East play-in field will be No. 7 Boston, followed in some order by Charlotte, Indiana and Washington. 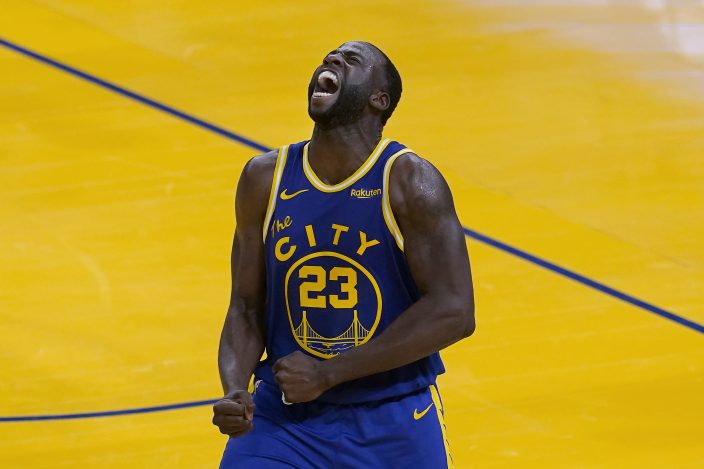 Golden State Warriors forward Draymond Green celebrates during the second half of the team's NBA basketball game against the Phoenix Suns in San Francisco, Tuesday, May 11, 2021. (AP PhotoJeff Chiu)

— Dallas beat Toronto to clinch no worse than No. 6 in the Western Conference and will avoid the play-in round.

— Memphis beat Sacramento, setting up a game at Golden State on Sunday that will essentially serve as a play-in to the play-in. The winner of the Grizzlies-Warriors game will be the No. 8 seed entering the West play-in round, while the loser will be No. 9 and must go 2-0 in the play-in games to make the playoffs.

— Philadelphia clinched the No. 1 seed in the Eastern Conference by beating Orlando.

Los Angeles Lakers forward Anthony Davis (3) celebrates after scoring during the second half of the team's NBA basketball game against the Phoenix Suns on Sunday, May 9, 2021, in Los Angeles. (AP PhotoMarcio Jose Sanchez)

The good news for the Lakers is LeBron James is listed as questionable for Saturday at Indiana, and the fact that he’s not listed as out probably means he’ll attempt to play for just the third time in his team’s last 29 games because of an ankle injury.

The bad news is, the Lakers need two wins to escape No. 7, and even that might not be enough.

The Lakers’ only hope is two wins — and a Portland loss to Denver on Sunday. If Portland wins its regular-season finale, the Lakers are play-in bound, regardless of anything else.

Sunday’s Blazers-Nuggets matchup is interesting for both sides; the Blazers would avoid the play-in with a win, while the Nuggets are tied with the Los Angeles Clippers for the third-best record in the West at 47-24. The Clippers lost at Houston on Friday, notable because they slipped back to No. 4 in the West race (Denver holds the tiebreaker there) and now, no matter what, cannot play the Lakers in Round 1 of the playoffs.

The jostling to see who will finish eighth, ninth and 10th going into the play-in will be wild. Charlotte and Indiana are both 33-37, Washington is 33-38, yet all three clubs enter the weekend seeing scenarios that put them in any of the three available slots on the play-in bracket.

Charlotte plays at New York on Saturday while the Pacers simultaneously play host to the Lakers. On Sunday, Indiana goes to Tampa, Florida to finish against Toronto while the Hornets play in Washington.

If there are ties, Charlotte holds tiebreakers over both the Pacers and Wizards. Washington would win a tiebreaker over Indiana.

The race for the No. 2 seed could end Saturday if Brooklyn beats Chicago and Milwaukee loses to Miami. Should both of those results happen, Brooklyn gets the 2 seed.

Otherwise, that race goes to Sunday.

Brooklyn is 46-24, a game ahead of 45-25 Milwaukee — but the Bucks hold the head-to-head tiebreaker. Brooklyn plays host to Cleveland on Sunday, while Milwaukee finishes at Chicago.

And seeds 4, 5 and 6 in the East will go, in some order, to Atlanta (40-31), Miami (39-31) and New York (39-31). The Hawks finish Sunday against Houston. Miami plays Milwaukee on Saturday and Detroit on Sunday. New York plays Charlotte on Saturday and Boston on Sunday.